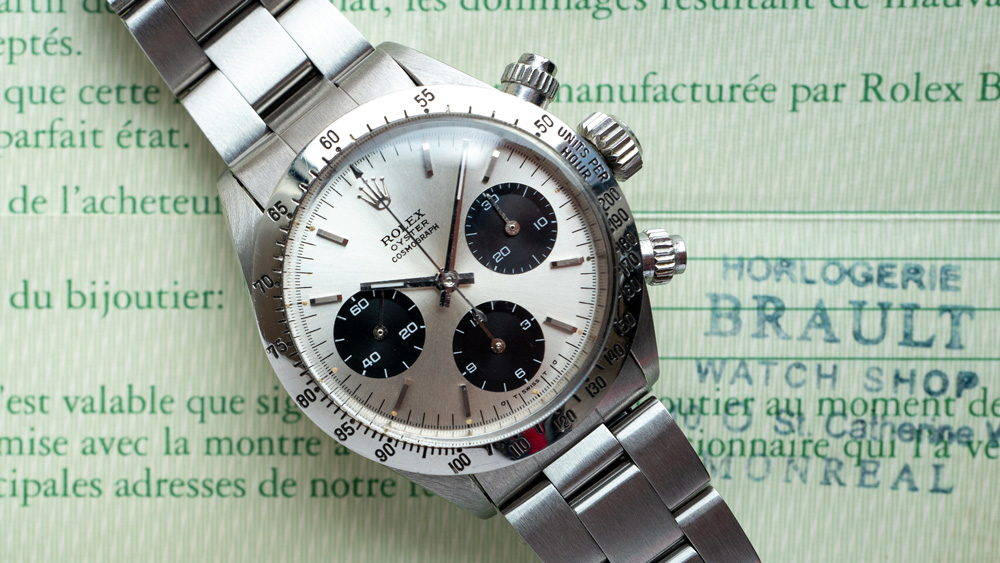 The worlds of automotive racing and fine timepieces will collide in the best possible way this weekend at the Ritz-Carlton Montreal, where Phillips’ watch department will hold a private selling exhibition timed to coincide with the Formula 1 Pirelli Grand Prix Du Canada.

From June 7-9, Paul Boutros, Phillips’ head of watches in the Americas, and watch consultant Geoff Hess will showcase approximately 15 sport-themed timepieces, many of them chronographs, made by such storied brands as Rolex, Heuer and Omega. Retail prices range from $9,500 to $75,000.

The private sale is one element of Phillips Perpetual, a new retail initiative the auction house unveiled earlier this spring in order to give clients more opportunities to buy and sell timepieces throughout the year.

“There’s a rising demand from our clients to obtain watches not only during auction season but also outside auction season,” Boutros says. “Some clients who consign would like to sell sooner than have to wait for the fall-spring auction time window. And some clients prefer not to have their watches at a public auction.”

The private sales began in March, with a selling exhibition at Phillips’ Berkeley Square Gallery in London, in collaboration with British luxury menswear brand Thom Sweeney.

Scheduling the second private sale over Formula 1 race weekend was strategic. “Obviously, it’s no coincidence we’re in Montreal,” Hess says. “It could very well be that future exhibitions are timed to Formula 1 races.”

The selection includes a 1958 Rolex Submariner, Ref. 5508, in steel bearing a “tropical dial”—vintage watch collector lingo signifying a dial that has acquired an interesting patina with age.

“We recently sold the same reference for a world record price of 500,000 Swiss francs in Geneva, that was a like-new example,” Boutros says of the Rolex Ref. 5508. “The one we’re offering has signs of wear but it’s original with very rare bezel, and it’s offered at a great price.”

Another highlight of the sale is “a lovely and rare Omega Speedmaster” in a pre-moon reference (105.002-62)—meaning it was made before the model landed on the moon in July 1969—that comes in an unpolished case and boasts all the original parts including an original bracelet.

“The reference is hardly ever seen,” says Boutros. “It was produced for no more than six months in 1962.”

“In this year of the 50th anniversary of the moon landing, Speedmasters have captivated the collecting community,” he adds. “This is a rare opportunity to obtain a pretty rare reference in exemplary condition.”

Perhaps the most relevant watch in the F1 sale, however, is a c. 1970 Heuer Autavia, Ref 1163, in steel with silver dial on an original bracelet.

“It’s also known as The Siffert, after Jo Siffert, a famous Formula 1 driver who wore this very reference,” Hess says. “He was ultimately killed on the racetrack, but was always seen wearing this watch. What makes this one very special is that it’s virtually new old stock, possibly unworn, and mint in every way. It’s very fitting to have a spectacular example of a Formula 1 racing watch during Formula 1 weekend.”