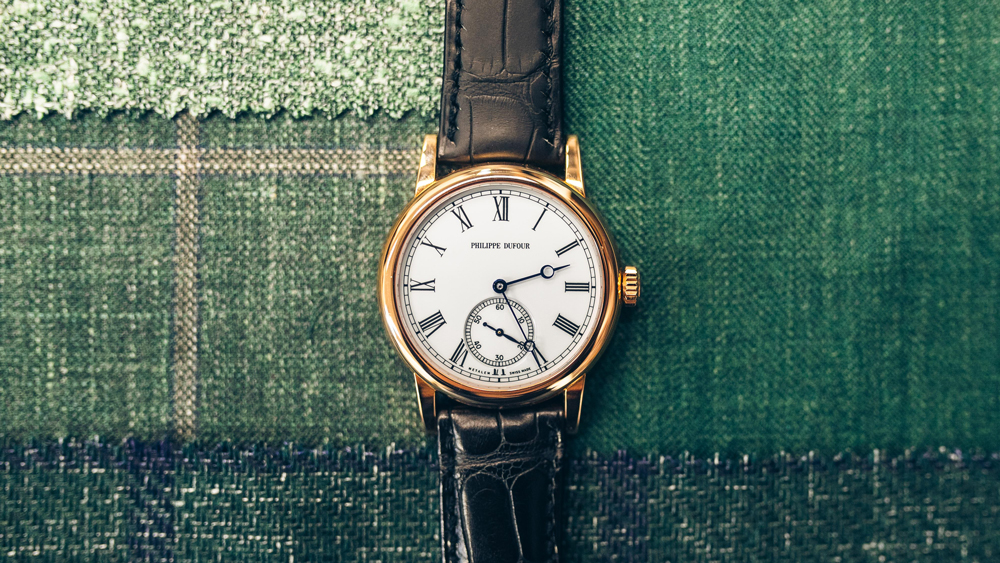 Phillips auction house has once again teamed up with a men’s clothier to showcase luxury watches in their natural habitat—amidst a selection of well-tailored suits, in this case by London bespoke tailor Thom Sweeney. The selling exhibition, entitled “Well Suited,” is a kind of pop-up store for lovers of custom suits and handmade watches, running from March 15-21 at Phillips in Berkeley Square, London.

Phillips in Association with Bacs & Russo did something similar in New York a few months ago, pairing watches from its fall New York auction with a selection of tailored looks from Mr. Porter, curated by The Rake. Last year, Phillips London hosted “Watchmakers: The Master of Art Horology,” which also featured works of independent watchmakers.

“Well-Suited” will exhibit 25 watches at the exhibition, made by celebrated independent watchmakers, among them Philippe Dufour, Vianney Halter, Richard Mille, Romain Gauthier, Ludovic Ballouard and F.P. Journe, whose creations are the watch-world equivalent of custom tailoring. They are crafted mostly by hand in very limited quantities, with an attention to detail and finish similar to that in bespoke tailoring. The highlight is a piece called Simplicity, made by the star of independent watchmakers (and the first watchmaker to put a Grande Sonnerie in a wristwatch), Philippe Dufour, a cult favorite among aficionados. It is a 37 mm rose gold model with a classic white lacquered dial and Roman numerals.

“Thom and I have collected watches for many years and have always felt that the mark of a man was excellent manners, a great suit and a beautiful watch,” says Luke Sweeney, co-founder of Thom Sweeney. “We’re happier still to have worked alongside James Marks on the curation of this exhibition, which brings two forward-thinking brands together through a shared appreciation of craft and design.”

Thom Sweeney was founded in London’s Mayfair district in 2006 by Thom Whiddett and Luke Sweeney, who met while working for tailor Timothy Everest where Whiddett was an apprentice cutter and Sweeney headed up the made-to-measure business. A selection of their bespoke tailoring was handmade specifically for the exhibition, and will also be for sale. The show includes a behind-the-scenes look at the secrets of the cutting room, which includes bespoke tailors that will be cutting patterns and garments for the duration of the event.

The exhibition was co-curated by James Marks, international specialist and director of Phillips’s international team. The show also includes pieces from Patek Philippe, Rolex and Grand Seiko. “Well-Suited showcases one of the finest selections of independent brands to be offered in London in recent memory,” says Marks in a press statement.