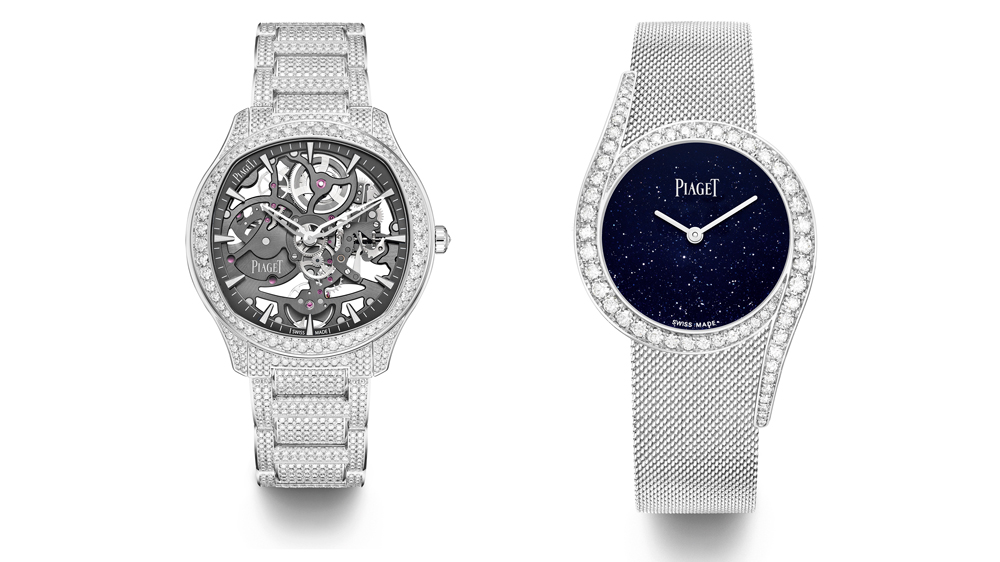 Piaget
The 1970s were a time of great artistic and technical achievement for Piaget. The maison’s new CEO, Benjamin Comar, describes it as the time when the name Piaget became synonymous with the jet-set crowd in the Côte d’Azur through its Piaget Society, a series of glamorous gatherings put on by the brand. He mentions frequent attendees including Andy Warhol, Elizabeth Taylor and Jackie Kennedy, and describes the scene as “an extravaganza that seduced Europe.” During that period, it also introduced two timepieces that were destined to become icons: the Piaget Polo in 1979 and the Limelight Gala in 1973.

Since then, Piaget has set records in watchmaking—notably, for its ultra-thin movements—and released opulent high-jewelry collections. Comar notes that the brand can be difficult for some people to understand. “I’m always asked, ‘Are you a jeweler? Are you a watchmaker? Are you for ladies? Are you for men?’” he says. “I think we are a full universe. We are all of that.” Today, the house reveals two new models that show its mastery of mechanical movements and gem-setting, perhaps answering those questions once and for all.

The Piaget Polo is one of the most elegant sports watches on the market, and this new high-jewelry model is a fabulous statement piece. The 42 mm Polo Skeleton ($228,000) is set with 1,478 diamonds, totaling 10.04 carats, while the case has 2.43 carats of larger diamonds. The gem-setting alone takes 61 hours per watch and it is simply spectacular. Despite being covered in diamonds, the watch is smooth to the touch, with no risk of the diamonds or prongs pulling on delicate fabrics.

The bling nicely contrasts with its equally high-end skeletonized movement. The self-winding 1200S1 is one of the thinnest in the world, clocking in at just 2.4 mm. The 18-karat white-gold watch measures only 7.35 mm in thickness, thanks to the maison’s ultra-thin movement. The beautiful finishing is on full display, with details including circular and sunburst satin-brushed wheels and sunburst satin-brushed plate and bridges. The watch is finished by a reverse-set diamond in the crown.

The new 32 mm Limelight Gala ($52,500) is a more subdued showpiece. The asymmetrical, elongated lugs are instantly recognizable, as is the maison’s Milanese mesh bracelet. More wearable as a transitional day-to-evening watch, it is set with diamonds around the bezel and lugs and comes on a comfortable strap. Its sleek elegance is matched by an in-house, self-winding movement. (The smaller 26 mm model features a quartz movement.) Comar describes it by saying, “it’s in between a jewel and a watch.”

The bezel is set with 62 brilliant-cut diamonds, which are nicely complemented by a glittering aventurine glass dial flecked with specks of silver, reminiscent of a starry night sky. Beneath, its Calibre 501P1 measures a mere 3.63mm thick and has a 40-hour power reserve. The Milanese mesh bracelet, meanwhile, has been engineered to feel like a second skin. It takes over 100 hours for artisans to weave together spirals of 18-karat white gold to create the mesh. The Limelight Gala Aventurine is limited to 300 pieces.

After discussing Piaget’s history and unveiling the new watches, Comar looked to the future. “I’m thrilled to work with the team on the development of this magnificent brand, which has a great heritage in watches and jewelry,” he said. We’re looking forward to seeing more of what Comar has in store for Piaget in the coming months as he begins to forge a new future for the company.