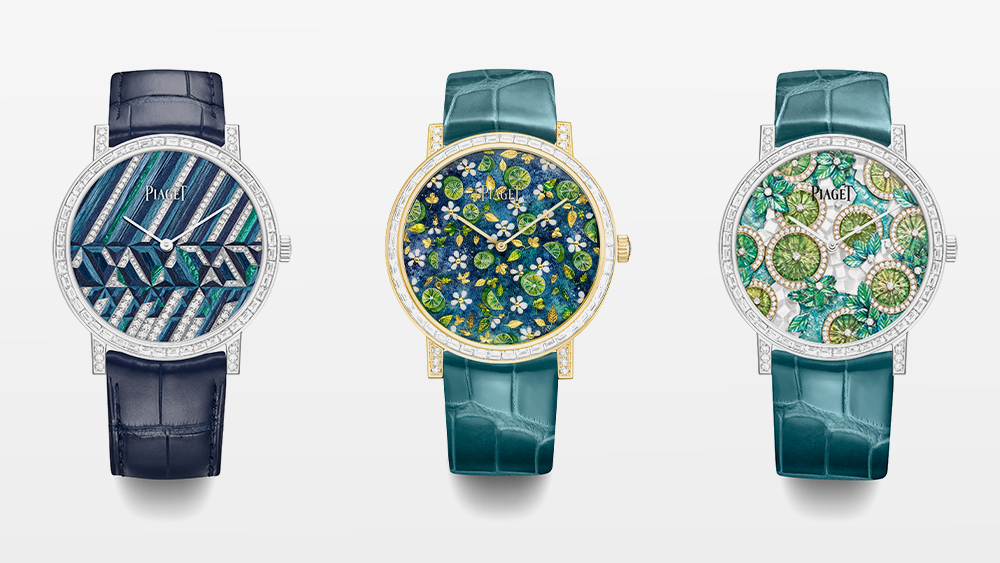 Piaget let loose a little for its latest collection of watches and jewelry, inspired by cocktails. We may be in the thick of Fall but the Swiss company had summer on its mind for the new Solstice collection. Colorful libations inspire the rich bursts of color throughout but take on a more literal interpretation in pieces like a watch dial accented in limes or a ring with a gem-encrusted piece of fruit popping off the side.

At the core of the line, which consists mainly of—naturally—cocktail rings is a colorful assortment of joyful gemstones, arranged to resemble the negronis, Manhattans, gin fizzes and mimosas we all love. Piaget mixes up a fizzy blend of peridot, citrine, tourmaline and indicolite, stirs in a few diamonds and shakes them up together in a whimsical design worthy of happy hour.

“The objective is to develop the utmost expression of Piaget audacity and savoir-faire by creating pieces that express the joyful side of the brand,” says Christophe Bourrie, Piaget’s global director of high jewelry. “Semi-precious stones are the best way to express that, and to recreate the bright colors in special cocktails. Each piece is a kind of fantasy, rather than a formal, classic piece of jewelry with sapphire, rubies or emeralds. They’re fun.”

Fun, maybe, but not easy to create. As more and more brands compete to serve a growing customer base of high-net-worth customers who expect the best of the best, the competition to acquire the world’s top gemstones is heating up, according to Bourrie. “The nightmare is to find stones,” he says. “There is huge pressure on the market from not only the big maisons, such as Cartier, Bulgari and Graff, which are getting bigger and bigger, but also the fashion maisons that are getting more into high jewelry, like Louis Vuitton, Dior, Chanel and Gucci. We’re all competing to buy the best gemstones, and these are not something that can be manufactured. They are gifts from the earth,” says Bourrie. “We have a team of seven in-house gemologists searching for the best gems, three of whom are dedicated solely to center stones. We have focused on the highest quality for the very simple reason that we want to position ourselves at the highest quality range of high jewelry. That is how we will be different from others, because we will never be bigger.”

The showcase watch in the collection is a cocktail on the wrist. The dial features lime slices and mint leaves floating in a white liquid punctuated by diamond ice cubes. It was a collaboration between Anita Porchet, Switzerland’s leading lady of enameling, and Dutch master engraver, Dick Steenman. On a background of sculpted mother-of-pearl, Steenman engraved outlines of lime slices and mint leaves. Anita Porchet then applied a palette of translucent enamels to bring the limes and mint leaves to life. Porchet’s work is showcased on another dial, on the Festive Sharing watch, depicting a breezy pastiche of lemons, limes, flowers and leaves, using champlevé enamel, paillonné enamel and miniature painting. A third watch, the Gleaming Savor, features the work of French marquetry artist Rose Saneuil in a composition resembling a starry night–cocktail time–using 177 individually cut pieces of straw, sycamore wood and elytron (beetle wings). The bezel is set with baguette diamonds, set upside down for a diffused light effect.

Piaget launches a unique collection of 50 to 100 pieces once a year under the umbrella of the Creative collection. Each can take five years to complete, depending largely on sourcing the gems, so several are being worked on at once. “It takes even longer nowadays,” says Bourrie, “because there is a sustainability compliance check list to follow as well.”

Piaget was founded in 1874, starting out as a maker of watch movements, and then as a producer of its own watches—mainly dress watches and high jewelry pieces. “Piaget’s expertise in jewelry watches led to special orders from clients for straight jewelry without the watch, so around the 1960s, the maison started to do jewelry-only pieces on request,” explains Bourrie. “At first, it was just additional business, and then we started, maybe 20 years ago, to do proper collections.”

The annual Creative Collection is usually introduced at special salons and private events. In the 1970s, when Yves Piaget instilled his design mark on the business (he created the flagship Polo watch collection) and brought his social contacts to the brand, Piaget gained a wide following among celebrities, a following that was referred to as the Piaget Society. Today, in the age of burgeoning collector groups, Piaget is reviving the concept among its loyal client base. “Our Piaget Society is a creative movement,” says Bourrie. “It was social before social media, a joyful group of jewelry and watch lovers, people from either in front of or behind the camera, cultural leaders, pioneers and modern beauties. When they meet, it is like finding a home away from home for people with common interests, who live boldly but with sophistication, and who dare to be rare. Its collective energy has a unique power.”