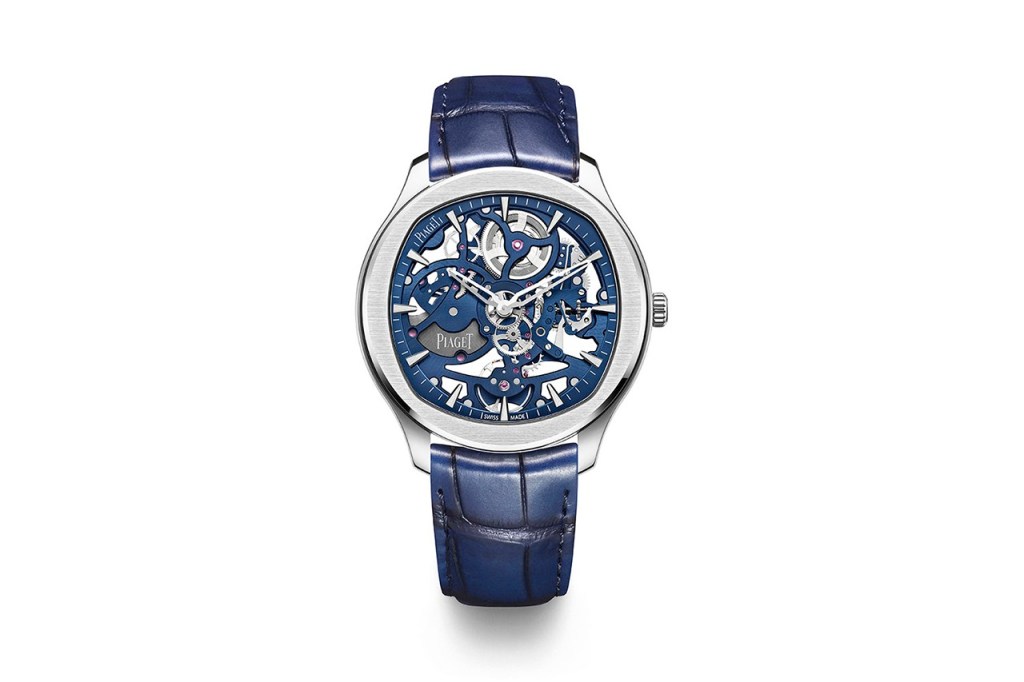 Piaget’s signature steel sports model, the Polo, has been slimmed down, skeletonized and spruced up with a splash of color.

The Piaget Polo Skeleton is equipped with a new movement, the super-slim 2.4mm-thick caliber 1200S1, that was two-and-a-half years in development. It’s an evolution of the 1200S, introduced a few years ago in the Altiplano. The main difference between the two is the finishing. The bridges, plate and screws of the 1200S1 are colored either slate grey or a glossy PVD blue, two colors that are hot right now—blue has been popular for a couple of years now, and grey is just emerging as a trend. The plates and bridges are sunburst satin-brushed and beveled, and wheels are circular and sunburst satin-brushed. The new caliber makes its debut here in a case that is 6.5mm thick, which is 30 percent thinner than the non-skeletonized version of the automatic Polo Sport.

Piaget has long specialized in ultra-thin movements, and at various times has held world records for the thinnest calibers. In 1957, Piaget introduced its renowned ultra-thin caliber 9P, which was a record-breaking 2mm thick. Three years later came the 12P movement, at one time the world’s thinnest automatic movement at just 2.3mm thick. It culminated last year with the Piaget Ultimate Concept, which won the Aiguille D’or (Grand Prize) at the 2020 Grand Prix d’Horlogerie de Genève for its record-breaking case thickness of only 2mm.

The Polo was originally introduced in 1979, and was among the designs of that era to make a lasting impression. Like the Patek Philippe Nautilus and Audemars Piguet Royal Oak, the Polo was one of the original luxury sports watches. The dial was distinctively marked with horizontal godroons that were replicated on the bezel and all along the integrated bracelet. It had a minimalist dial with knife-edge dauphine hands, and it was worn by celebrities of the day, including Andy Warhol and Brooke Shields. The Polo was updated and relaunched in 2016 with a slimmer profile and a cushion-shaped dial opening in a round, curved case.

Skeletonizing the Polo makes it even slimmer, but is it still a sports watch? Certainly, the colors are sporty. The blue PVD is bright and shiny despite the satin finishing, and the grey is almost dark enough to be black. The water resistance is only 30 meters compared to 100 meters for the non-skeletonized Polo, so this is not the watch to wear surfing. But despite being skeletonized, the 1200S1 has a full balance bridge, which makes it robust. And to use the precise term, the watch is openworked rather than skeletonized, which traditionally means the bridges and plate are reduced even further by engraving, usually into scrolled patterns. Piaget says the 1200S1 is also slightly more magnetic resistant than the 1200S.

The movement, which can be seen through the caseback, has an off-center micro-rotor, colored slate grey and engraved with the Piaget coat of arms. The steel case is 42mm, and it comes with both a steel bracelet and a blue or grey alligator strap, which can be interchanged using a quick-release system. Both versions retail for $28,500.