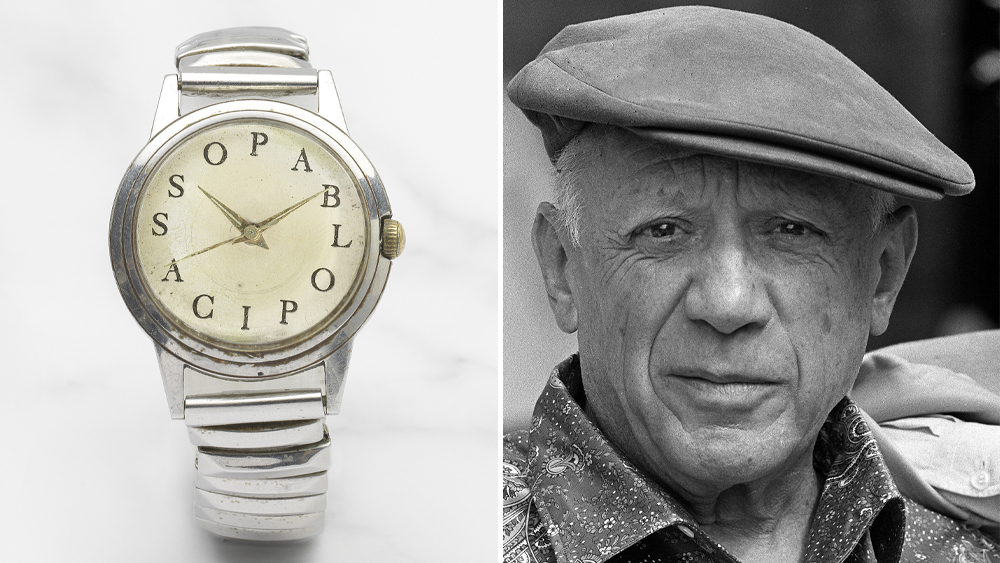 Apparently, it’s not just Pablo Picasso’s art that attracts the big bucks. A rare wristwatch once donned by the towering Spanish artist hammered down for 18 times higher than its pre-auction estimate thanks to a fierce bidding war.

Designed by independent Swiss watchmaker Michael Z. Berger, the storied steel wrist candy dates back to 1960 and is one of only three known examples to bear the Spaniard’s name on the 32 mm dial. The black letters of “Pablo Picasso” form the hour markers in a rather unabashed attempt at self-branding.

Picasso’s timepiece sparked a bidding war among collectors before it sold for $267,000.  Bonhams

“This was an extraordinary find and we are so thrilled at this well-deserved result for such a special timepiece, which was also a superb example of the 12-digit name tradition,” Jonathan Darracott, Bonhams global head of watches, said in a statement. “It is rather fitting that Picasso followed this trend as he was famous for being a great self-publicist.”

The timepiece sports a 17-jewel manual-wind movement that manages time and center seconds, along with a classic, period-correct expanding steel bracelet. Picasso has been captured wearing the custom timepiece in many photographs throughout history, including the famous portraits by Cecil Beaton.

According to Bonhams, Picasso gifted the watch to his friend and fellow creative Lela Kanellopoulou. The vendor, who was one of the Greek sculptor’s relatives, said Kanellopoulou always treasured the watch and it was something of a talking point.

In addition to Picasso’s vintage timepiece, a collection of Giuseppe ‘Oscar’ Damiani’s watches netted impressive sums. The Italian soccer star, who is now the agent of Arsenal striker Pierre-Emerick Aubameyang, had 11 wristwatches on offer that were made to commemorate victories of his former teams. An 18-carat gold Patek Philippe designed to mark the centennial anniversary of AC Milan sold for nearly $34,000 (€27,800) while a stainless-steel Rolex honoring the Champions League and Serie A wins of the team (above) hammered down for $11,700 (€9,563).

The successful sale took place at Bonhams’s new Paris location, which is part of the auction house’s strategy to expand in Europe. By the looks of it, the move is already paying dividends.