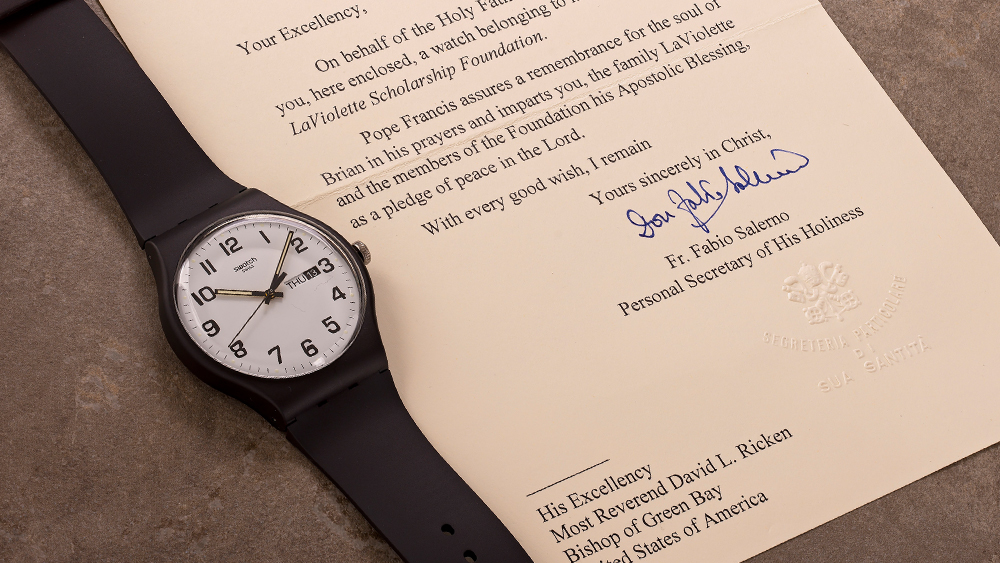 When it comes to provenance, there’s never been a watch auction like this.

On November 30, Rago/Wright in Chicago will hold a special auction of 49 timepieces, many with exceptional back stories—like an unassuming black Swatch from the 2010s that belonged to Pope Francis.

Estimated to fetch between $10,000 and $100,000, the 34 mm wristwatch, which comes with a box, papers and a framed letter of provenance from The Vatican and The Green Bay Diocese, is one of 49 lots that make up the “Once Upon a Time Watch Project,” a sale whose proceeds, including the 25 percent buyer’s premium, will benefit the Brian LaViolette Scholarship Foundation.

The LaViolette family created the foundation, which provides financial aid to high school seniors, in 1992 to honor the memory of their son, Brian, who died that year, at the age of 15, in a swimming accident near Green Bay, Wisc. Brian excelled at sports, academics and music. He also loved timepieces (he acquired his first watch at age 4).

Since its founding, the foundation has presented 1,058 scholarships to deserving college-bound students around the world.

Rago/Wright organized the sale with the help of vintage watch dealer Eric Wind, who learned about the foundation when Doug LaViolette, Brian’s father, contacted him in November 2021.

“Green Bay is close to where I grew up and where my parents still live,” Wind, owner of Wind Vintage in Palm Beach, Florida, tells Robb Report. “I donated a vintage Rolex and contacted a lot of people to donate as well.”

Other notable lots in the sale include a Patek Philippe perpetual calendar, a handful of vintage Rolexes, a steel tonneau-shaped Michele watch from former US Secretary of State Condoleeza Rice, a blue-dial Vostok world timer watch from NFL Hall of Fame quarterback Terry Bradshaw, and a gold-plated Vulcain Cricket wristwatch that once belonged to Academy Award-winning actor José Ferrer, donated by Charlie Dunne, director of content and research for Wind Vintage.

“When I got involved, we didn’t have an auction partner,” says Wind. “We contacted Rago; I thought they would be good because they’re the only auction house that does watch auctions in Chicago, not far from Green Bay.”

A wide variety of watches have been consigned to the sale, including brand new watches donated by companies such as Oak & Oscar, a Chicago-based independent watchmaker, and pre-owned pieces donated by individuals, including an Autodromo from the collection of the singer-songwriter Aly Michalka, and a vintage Heuer “Big Eyes” chronograph from actor Randall Park (“a very elegant and desirable vintage chronograph,” says Wind).

“Coach K donated a watch he’d gotten as a commemorative piece,” says Wind, referring to a steel Fossil watch from Mike “Coach K” Krzyzewski, who served as head coach of the Duke men’s basketball team from 1980 to 2022.

“One of the coolest watches is a Wittnauer worn by Sergeant Donald Jakeway, a paratrooper for the 82nd Airborne, on D-Day,” says Wind. “You can’t beat that provenance.”

“Nothing is earth-shatteringly expensive, but hopefully the fans of these people will see the watches and want to own them,” he adds.