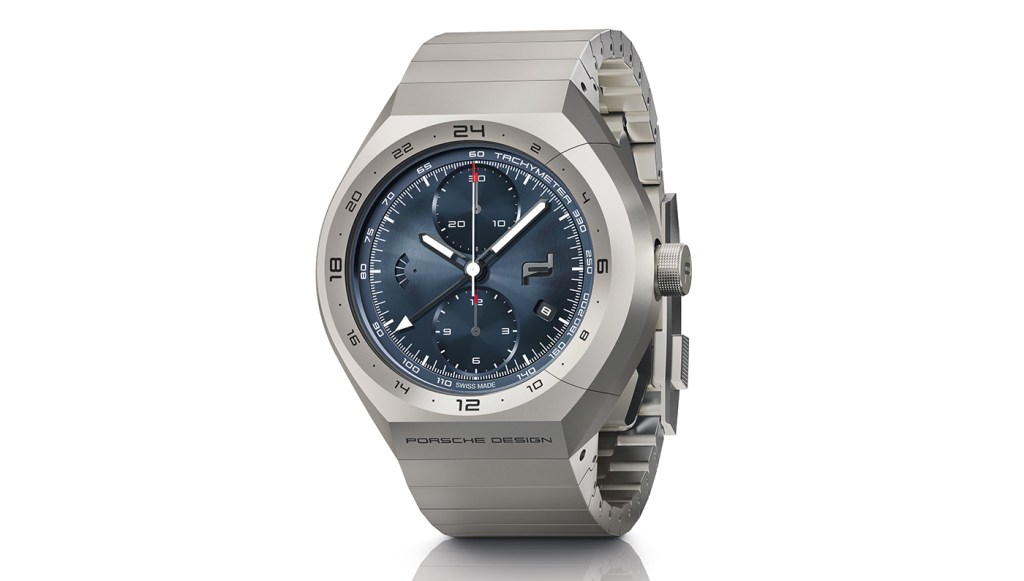 One thing is clear: Innovation is once again paramount in Porsche Design’s timepiece division. The new Monobloc Actuator doesn’t look particularly over-the-top at first glance, but the brand has developed a new and unique way to operate its chronograph function that has never been seen before. Using the crown as a pivot point, Porsche Design’s R&D team designed a single rocking actuator arm to replace the push pieces on a conventional chronograph. The single arm pivots within a hair’s breadth of both the rest of the case and the timepiece’s sapphire crystal, and as the upper portion is pressed inward, the lower arcs outward. In the early concept phases Porsche Design’s team spent a great deal of time brainstorming how it could take a page from the Porsche Motorsport division to bring a new design element into its latest creation. As the team began examining the engine architecture of the new Porsche RSR, the idea for the Monobloc Actuator was born.

Porsche Design opted to source movements from ETA/Valjoux to power the new Monobloc Actuator models rather than return to Eterna, which supplied the bulk of the calibers in 2016. When previewing the new piece in late January, Porsche Design’s head of timepieces provided what could only be called a slightly guarded reply when pressed regarding the move to in-house caliber manufacture, leading us to suspect that this may be part of the brand’s long-term plan. In the case of this latest release, the choice of using these robust ETA Valjoux movements is certainly not a bad choice, given the category in which the watch is competing.

The Porsche Design Monobloc Actuator will be offered in a few different configurations, including three of the GMT-Chronotimer and a single version of the 24H-Chronotimer. Available with brushed-black or muted-blue dials, each model (starting from $6,350) will be available on either a natural rubber strap or a somewhat chunky slat-style titanium bracelet. The addition of the aforementioned bracelet to the piece’s already fairly large dimensions (45.5 mm in diameter and 15.6 mm thick) make it a little hefty for collectors with slimmer wrists, though the switch to a rubber strap makes a significant difference in fit. (porsche-design.us)