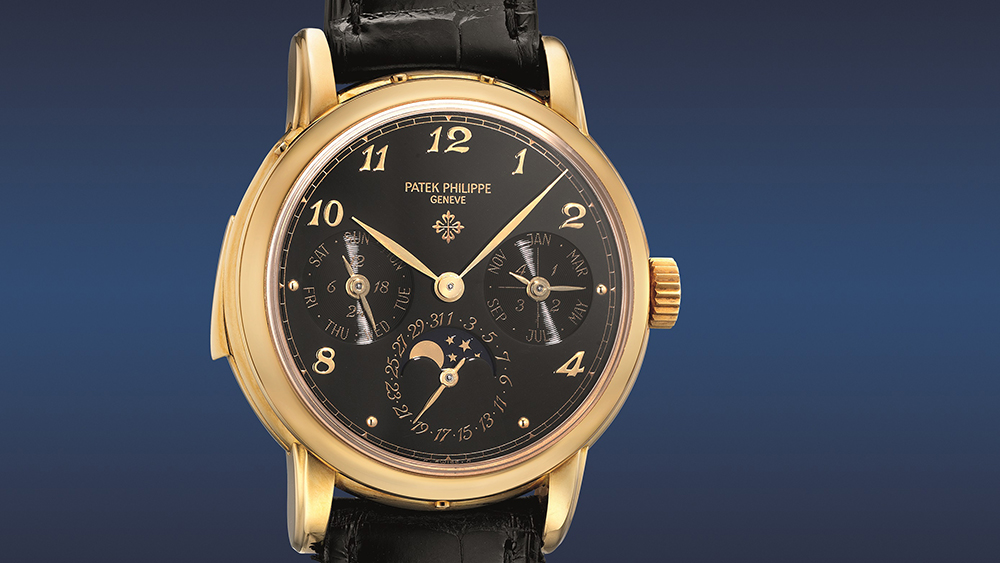 What was once the world’s most complicated wristwatch will go under the gavel at Phillips next month.

The timepiece in question is a coveted Patek Philippe Ref. 3974. Launched in 1989, this self-winding watch features a minute repeater, a perpetual calendar, 24-hour indication and phases of the moon. Ref. 3974 was considered the most technically sophisticated watch of the time. It was one of the rarest, too, with only around 16 made in total.

This particular example, which the auction house has labeled “possibly unique,” was one of the earliest produced and sports a yellow-gold case crafted by legendary casemaker Jean-Pierre Hagmann. In addition, the rarity has been extensively customized by Patek Philippe. The striking black lacquer dial is embellished with the Calatrava Cross, italicized calendar indications and rare gold Breguet numerals to match the case.

A stellar example of haute horlogerie, the timepiece is expected to fetch between $408,000 and $829,000 at the upcoming Hong Kong auction. It’s not the only standout, either. Presented in association with Bacs & Russo, the sale, which will take place from May 27 to 28 at the JW Marriott in Hong Kong, comprises an array of extravagant wrist candy from Rolex, A. Lange & Söhne, Richard Mille, F.P. Journe, Lang & Heyne, Kari Voutilainen and Christophe Claret.

What’s more, many of the watches on offer have never before appeared at auction. This includes a pink-gold Patek Philippe Nautilus Ref. 5723 with the prestigious double stamp by Tiffany & Co. and 4 carats worth of rubies, which is expected to realize between $300,000 and $497,000.

Also fresh to auction is a yellow-gold Rolex Cosmograph Daytona Ref. 16528 with an “R83” serial from circa 1989. Nicknamed “Yin Yang,” this watch is fitted with a concept porcelain dial and features a black “Daytona” inscription above the six rather than the regular red-colored signature. It’s estimated to attract between $199,000 and $398,000.

It’d be remiss not to mention that an array of Patek Philippe’s Metiers d’Art watches will also go under the gavel. Featuring techniques from cloisonné enameling to hand engraving, these rarities are true works of art. One highlight is the Peregrine Falcon open-faced pocket watch Ref. 982/147, which showcases marquetry in its finest form via one elegant bird. It’s expected to pull in between $149,000 and $255,000.