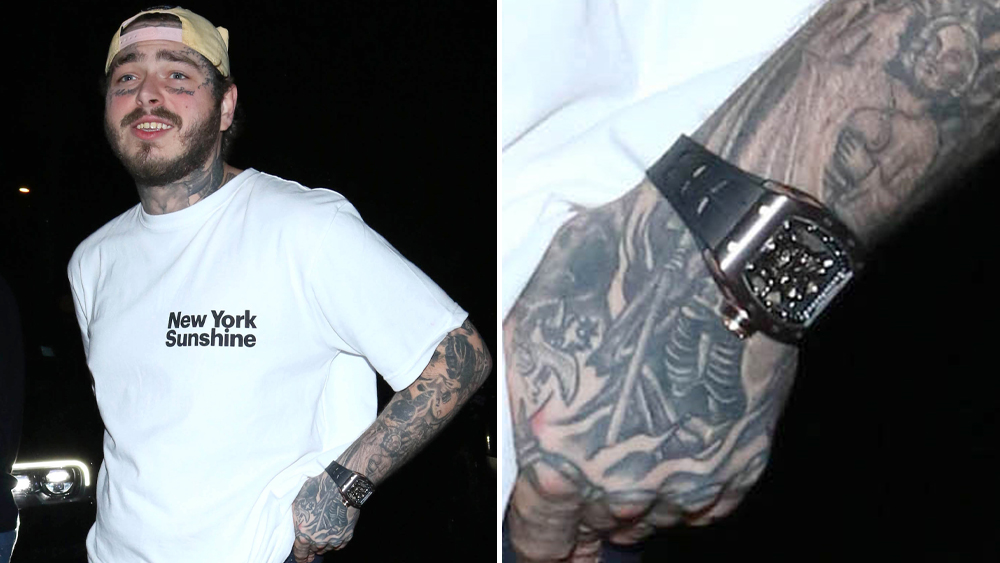 During his ascendency to pop stardom, Post Malone has shown an affinity for face tattoos, Crocs and Bud Light. But if his most recent acquisitions are any indication, it’s clear the singer also has more than a passing interest in watches.

Having already proven himself to be an admirer of Rolex and their more colorful offerings earlier this year, the singer showed last week that he’s paying attention to other Swiss watchmakers, too. While out and about in Los Angeles, the “Goodbye” crooner was photographed with one of Richard Mille’s more outlandish timepieces on his wrist—the RM 052 Tourbillon Skull.

As the moniker suggests, Post’s latest watch features a giant skull, making it the perfect timepiece for someone who saw fit to get barbed wire, a Playboy bunny and “Always Tired” inked across his face. But because this is Richard Mille we’re talking about, that skull isn’t just there for decoration. It’s actually at the heart of the technically impressive watch. Made of grade 5 titanium, the front section of the skull includes the watch’s skeletonized baseplate and bridge, while the back makes up the movement’s center bridge.

Other feature’s include a manual-winding tourbillon movement, 19 jewels, a Glucydur balance wheel with four setting screws, an Elinvar by Nivarox balance spring, shock protection and a 48-hour power reserve. A limited-edition when it was originally released in 2012, the watch carried a price tag of $500,000.

“This new caliber represents the fullest expression of liberty and nonconformity and as such, very much typifies the philosophy of the brand,” the Richard Mille website states. “Extreme technique, high performance, the highest level of aesthetic and hand-finishing: the RM 052 Skull is true Haute Horlogerie.”