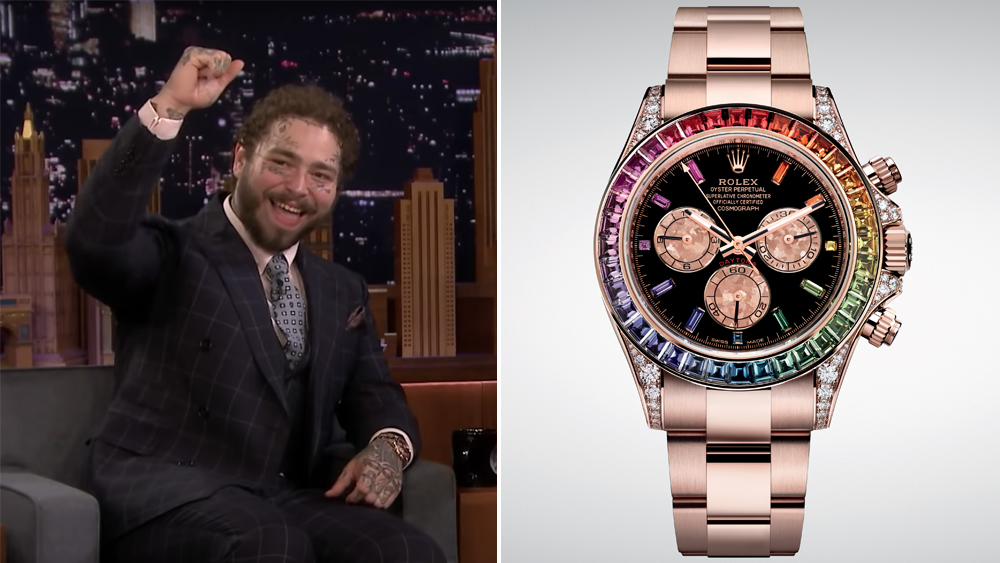 What do Post Malone, John Mayer and Kevin Hart all have in common? They’ve all fallen under the spell of one of Rolex’s most playful watches—the Rainbow Rolex Cosmograph Daytona.

Malone was spotted wearing the Swiss watchmaker’s most flamboyant timepiece during an appearance on Late Night with Jimmy Fallon last week. Known for his unorthodox, and some might say sloppy, aesthetic, the “Flower” singer actually dressed up—sporting a tailored double-breasted, three-piece suit—to tease his upcoming, as yet-untitled third album. While he may have hit a decidedly more restrained style note than usual, the Everose variant of the watch dangling from the Grammy nominee’s left wrist made clear his days of adventurous style choices aren’t behind him just yet.

The singer is just the latest in a long line of celebrities who have oh so casually tugged up their shirt or jacket sleeves to show off the timepiece. Just this year, French soccer star Antoine Griezmann was spotted wearing one just before completing his move to Barcelona. New Los Angeles Laker Anthony Davis wore his to an NBA Summer League game. And Adam Levine managed to keep his on while stripping to the waist during his Super Bowl LIII performance. Other famous wearers of the watch include the previously mentioned Mayer and Hart, as well as Miley Cyrus and Mark Wahlberg.

Unlike some fashion trends, it’s easy to see why such a disparate group of people, famous or not, are into the Rainbow Cosmograph Daytona. The perfect watch for someone looking to make a statement, it features 36 baguette-cut sapphires around the bezel, eleven more as hour markers, while 56 brilliant-cut diamonds cover its lugs. Malone, Griezmann and Davis were all spotted wearing the Everose version of the watch, but previous iterations were produced in white and yellow gold.

The timepiece has also proven to be a good investment. Because it’s so hard to find stones that meet Rolex’s exacting quality standards, each version of the watch has only been produced in limited quantities. Because of this, the rare watch has tended to go for significantly more than its original price on the secondary market. While the Everose variant was available for $96,900 when it was first released last year, it goes for more than three times that now.

The in-demand watch has also been something of a trailblazer. Since the first Rainbow Cosmograph Daytona was released, Audemars Piguet, Chopard, Franck Muller, Hublot, Jacob & Co. and Parmigiani have all released colorful watches.