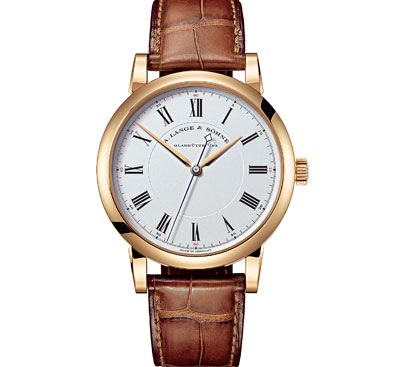 Looking at the Richard Lange watch, the most prominent new timepiece from German maker A. Lange & Söhne, you would never imagine that its movement’s regulating organ is the product of 12 years of development and one of the few in the industry that is made completely in-house. The watch does not flaunt elaborate subdials or unusual, world-premier functions or high complications. The Richard Lange’s simple gold case and plain dial belie the complexity of its inner mechanism, which the watchmaker honed to achieve one simple goal: accuracy.

Accuracy was once the raison d’être for virtually every component and feature of a mechanical watch. But since the 1970s, when inexpensive quartz watches proved much better at keeping time, the bulk of the Swiss mechanical watch manufacturers have emphasized form—design, decoration, and complication—rather than precision. High watchmaking, or haute horlogerie as it is known in Switzerland, has become more closely associated with decorative finishing techniques, such as anglage and perlage. And with the COSC (Contrôle Officiel Suisse des Chronomètres), the official Swiss regulatory agency, annually certifying as “chronometers” more than 1.2 million mechanical watches that fall far short of quartz performance, accuracy has become a somewhat specious and ubiquitous claim.

A. Lange & Söhne and a handful of other top-tier manufacturers are seeking to lend more credence to the term by developing timepieces with accuracy standards that are more stringent than the variance of -4/+6 seconds per day required by the COSC for a chronometer certificate. These timepieces do not yet incorporate silicium, nickel-phosphorus alloys, or other advanced materials with which the watch industry recently has begun working. Instead, the manufacturers have been tweaking movement component designs and construction techniques, many of which have existed for years. By advancing timekeeping performance, these watchmakers are resurrecting a neglected discipline and instituting precision-based criteria for evaluating quality.

At Patek Philippe, the pursuit of accuracy always has been fundamental to its watch development. Advancement continues through highly publicized experiments with new materials and through the implementation of innovative construction techniques. Technical director Jean-Pierre Musy is a key figure in the brain trust behind Patek Philippe’s movements. Graying and genial, Musy appears professorial as he sits in his well-lit office surrounded by books and stacks of papers. Despite the complex nature of his work, he manages to explain in simple terms the basics of how to make a more precise watch. “The whole balance wheel and escapement assembly is the area that most affects accuracy,” he says. “Optimally, a balance wheel should be as large as possible, and the hairspring should not be restricted in its movement.”

Many of the latest high-accuracy timepieces share this so-called free-sprung balance wheel system. Unlike the more common index regulation system, which allows a watchmaker to adjust the rate of the watch by slightly altering the length of the hairspring—the metal spiral controlling the oscillating balance wheel—the free-sprung balance wheel permits the whole assembly to move with an unimpeded and more concentric motion, regardless of the position of the watch. In F.P. Journe’s new Chronomètre Souverain, for example, the rate is adjusted by a system of eccentric, or unevenly balanced, weights on the rim of the balance wheel itself. By moving the positions of these weights, the watchmaker can change the inertia and therefore the rate of the balance wheel.

The aforementioned Richard Lange watch also employs a form of that system, which Patek Philippe invented in 1948 and dubbed the Gyromax. Patek Philippe unveiled a simplified and more efficient version of the mechanism in 2004’s caliber 324 movement.

As it does with the majority of its watches, Patek Philippe regulates the caliber 324s to -3/+2 seconds per day—far more exacting than the COSC requirements. By contrast, A. Lange & Söhne regulates the Richard Lange to -2/+4 seconds a day, erring on the fast side because it maintains that the wearer’s movement slows the mechanism. Patek Philippe, however, has noticed that its watches gain speed, becoming as much as a second per day faster, after they have been serviced for the first time. Like a new car’s engine, the watch parts run faster once they are worn in, so the watchmakers adjust them accordingly.

Unlike most Patek Philippe movements, the caliber 324 is one of the few with a balance wheel that beats at 28,800 vibrations per hour. The high frequency contributes to accuracy, but it requires extra power. This need challenged Patek Philippe’s designers, who work under strict guidelines (internally known as Formula A) that limit the thickness of the movements and therefore the power the mainsprings can generate. Musy and his team altered the profile of the caliber 324’s gear teeth with a configuration that reduces friction.

The new design also enhanced the consistency with which Patek produces the movement. “There is always a slight variation in tolerances from one piece to the next, which can change the way the pinions and wheels line up,” says Musy. “The new teeth compensate for this difference, which is slight because we stamp our parts. At companies that rely completely on CNC [computer numerical control] machinery to mill them instead, the problem can be worse because that method is less precise.”

These varying production methods distinguish the larger, established movement makers, which tend to use the expensive and precise stamping process, from the newly sprung boutique manufactures that have capitalized on the more accessible automated CNC milling method. Producing large quantities of accurate movements on the scale of Rolex or ETA requires a huge investment in stamping machinery and machine tool expertise—something that many horological connoisseurs fail to appreciate.

The Le Locle factory of Zenith, for instance, appears a bit fusty compared to those of the nouveau Swiss manufactures, whose sparkling clean facilities are replete with glass walls and digital machinery. Appearances aside, the established chronograph maker, once a supplier for Rolex, still consistently turns out an impressive volume of extremely accurate and advanced movements using the stamping manufacturing process. In the 1960s, Zenith developed its flagship El Primero chronograph movement with a balance wheel that beats at 36,000 vibrations per hour. Collectors have long valued this workhorse mechanism, which is reported to deliver better-than-COSC accuracy and remains the engine behind some of Zenith’s latest models, including the ChronoMaster Open Concept.

For smaller companies such as A. Lange & Söhne and F.P. Journe, the advent of modern CNC milling has reduced drastically the cost of making movements. Producers using this method, however, must be vigilant about quality control and discard imperfect parts to overcome the variances that remain inherent in the process. “As we produce only a few thousand watches a year, we are in the lucky position to be able to individually regulate each Lange watch extensively,” explains Christophe Schlencker, head of the testing lab at A. Lange & Söhne, which primarily employs computer-controlled milling machines. “We also do several quality checks during the production and assembling processes using stricter tolerances than actually necessary.”

F.P. Journe produces just over 700 watches per year using similar methods. After the individual components have been inspected extensively, a single watchmaker assembles and adjusts each Chronomètre Souverain. Maintaining this old-world production tradition imparts a romantic quality to the modern manufacturing process, as does the overall quest for accuracy.