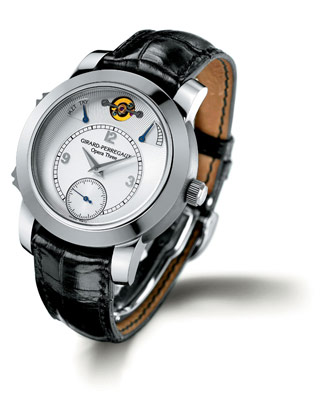 Oddly enough, precise production schedules almost never apply to complicated watchmaking. Unanticipated technical challenges can make the work frustratingly slow. Fortunately, master watchmakers seem to have a knack for outdoing themselves, ensuring that those who have the patience to wait for an exceptional timepiece will be amply rewarded.

Girard-Perregaux’s Opera Three is superlative not for a combination of the usual high-end complications, but for a novel function that enables the watch to live up to its name: a music box mechanism capable of chiming two tunes. The timepiece is in the spirit of the two previous Opera watches that both contained complex minute repeater mechanisms featuring four-gong Westminster chimes. But Opera Three diverges from traditional complications, giving it appeal for those who want a rare complicated timepiece but do not want to become bogged down in horological minutiae.

A music box mechanism is a natural application for a watch because its level of mechanical complexity is similar to most complications. In fact, such mechanisms have been previously achieved in pocket watches. To incorporate the function in a wristwatch, however, is far more difficult, which is one reason why Opera Three carries a $475,000 price tag. “The miniaturization required a series of technical achievements,” explains Ron Jackson, president of Girard-Perregaux USA. “The case, though, is only 43 millimeters, which is still not huge by today’s standards.”

Unlike a minute repeater, which produces sound with a set of wirelike, resonant gongs placed around the perimeter of the movement, Opera Three plays its tunes by plucking a graduated metal comb whose teeth represent a scale of notes. As with most full-size music boxes, the melody is determined by a rotating spindle with raised nibs that pluck the correct note on the scale at the appropriate time. The first Opera Three delivered to the United States will play a 12-second selection from either Tchaikovsky or Mozart at the touch of a lever. For future pieces, customers will have the option of playing tunes of their choosing.

Alarms are rarely a welcome sound. Even in a fine mechanical watch, most alarm functions tend to have the shrill chirp of an angry cricket. Not so with the Sonata from Ulysse Nardin, which features an alarm function that delivers a ring with the sublime musical quality of a minute repeater. Still, the Sonata’s appeal goes beyond the refined tone of its chime, thanks to an exclusive proprietary movement with functions that were designed for the rigors of modern life. The 24-hour alarm (with countdown indicator) and an easily adjustable second time zone are exactly what a modern, traveling man requires from a practical timepiece. And if its mellifluous tones suggest the highest level of traditional complicated watchmaking, so much the better.

Constructing a tourbillon is de rigueur for any elite watch company, but you have to credit Piaget for making its tourbillon a strikingly handsome watch as well as a statement of technical showmanship. In fact, the fortunate collectors who manage to secure one of the two or three Piaget Emperador Tourbillons ($91,000) destined for the United States over the next few months will find themselves in possession of one of the most elegant watches the company has ever produced. Rotating once a minute, the tourbillon cage (intended as an accuracy-enhancing feature) is one of the most arresting sights in watchmaking. The Emperador’s flying tourbillon design—which is several orders more difficult to complete than the conventional variety—makes the mechanism appear suspended between the front and back display crystals, while maintaining tasteful balance in the rectangular case. Clearly, Piaget has made its technical statement a little more eloquently than many of its peers.

Twice as Much might be a better name for the new dual time zone model ($25,200) in Roger Dubuis’ TooMuch collection. True to their name, these timepieces make excess a stylistic statement. Because the profligately wide case requires two straps, the obvious question is: Why not two dials as well? Needless to say, the TooMuch case is the perfect vehicle for a double time zone complication. The central minute hand sweeps normally, but the twin hour hands jump from numeral to numeral, which makes setting the second time an easy task. Gazing at the watch may create the sensation of double vision, but for Roger Dubuis, the extravagant, even the bizarre, is a means of expressing his flamboyant brand of design.

A few years ago, Vacheron Constantin debuted its unusual Mercator, which paid homage to the famous 16th-century cartographer Gerardus Mercator with its twin compasslike retrograde hands. A new 12-piece limited edition Mercator ($47,500), to be sold exclusively in North America, will be of special interest to collectors because its enamel dial is not only beautiful, but it also harks back to some of the oldest Geneva watchmaking traditions. The demanding champlevé enamel technique has rendered a historical map of North America that was originally drawn by Mercator’s son using the old master’s calculations. Anyone who stayed awake in geography class may recognize the Mercator name for the eponymous cartographic projection—those maps on the classroom wall that made Canada and Greenland appear to be the largest landmasses on earth. The Mercator’s enameled map shares this quaint antique inexactitude, making it a sure favorite for historians and Canadian nationalists alike.

A trend in wristwatch design has emerged that smacks of auto industry excesses. Just as every automaker, including Porsche, has rolled out its own interpretation of the sport-utility vehicle, watch companies, too, are on a quest for more size and power. Even timeless classics such as the venerable Reverso are not immune. The latest edition, Reverso Grande Reserve ($12,900 in rose gold), sports a heftier case and an eight-day power reserve from twin manually wound barrels. The Reverso Grande Reserve flaunts its new souped-up power train with an ingenious jumping power reserve display on the caseback that indicates just how many days remain before your watch needs rewinding. Since no true watch enthusiast can resist winding a watch, especially when there is the possibility of making a jumping numeral tick over, the Reverso Grande Reserve may be the first manually wound timepiece guaranteed never to run down.

Panerai, which has never shrunk from supersize watches, presents a 300-piece limited edition with a specific gravity that matches its epic dimensions. The Luminor Marina Tantalium ($11,500) is made from the rare element tantalum, a high-density metal with special properties that suit it for, among other things, the linings of reactor cores. The Tantalium may be the first Panerai that feels as big as it looks. That feeling may inflate your sense of self-confidence, and possibly your left bicep as well.