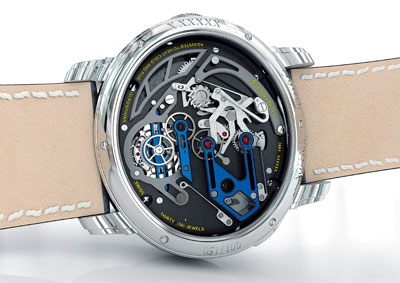 Audemars Piguet initially delved into automotive-themed watches last year with the highly coveted, limited-edition Royal Oak Offshore Juan Pablo Montoya chronograph and the simpler but striking dual-time-zone Millenary Maserati, the company’s first watch produced in partnership with the Italian sports car maker. Early next year, the Swiss manufacture will begin delivering the Millenary MC12 tourbillon chronograph ($227,000), a piece that is far more complicated than its first Maserati watch. In addition to evoking the car’s technical achievements, the new watch also will include a number of design elements that reference the V-12-powered GT racecar. Audemars will limit production to 150 pieces.

Audemars Piguet attributes the design of the movement, which is visible through the open-works dial, to Giulio Papi, co-founder and technical director at Renaud & Papi, the renowned specialty house that was formally incorporated into Audemars Piguet in 1992. Papi has directed Renaud & Papi’s most avant-garde complicated designs, including Richard Mille’s influential automotive-inspired tourbillons. This signature style is evident in the MC12, which has a movement base plate that is milled out of a carbon-fiber block and bridges made of blue anodized aluminum. Oddly, though, this ultralight movement is housed in a massive and weighty platinum case.

Audemars Piguet’s art director Octavio Garcia, who studied automotive design at the Art Center College of Design in Pasadena, Calif., conceived the dial and case. Maserati devotees instantly will recognize the carmaker’s signature blue and white color scheme. Furthermore, the watch’s tachymeter evokes Maserati’s speedometer design, and the car’s air intake port is replicated along the right side of the dial. Even the chronograph pushers, positioned at the top of the case, are angled like the car engine’s V cylinder configuration. Together, these design details create a watch that celebrates form as much as performance—just as an exotic Italian sports car does.