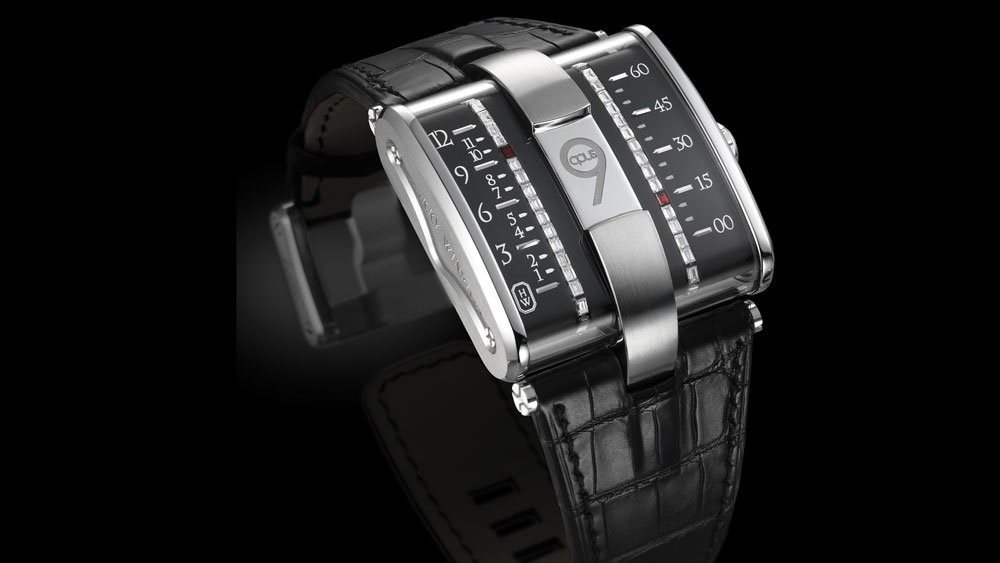 In the late 1980s, Jean-Marc Wiederrecht received a commission from Chopard to design an ultrathin perpetual calendar movement. Then as now, Wiederrecht—an independent watchmaker freelancing for luxury brands—already had a knack for flatness. He had spent his first years out of watch school assembling movements to fit inside $10 gold coins. But the more time he devoted to the perpetual calendar indication, the more frustrated he became with another dimension of miniaturization. “I wasn’t happy with the small counters,” he says. “I want to have big hands. I don’t like watches that are hard to read.”

Even after he completed the assignment for Chopard, Wiederrecht continued to agonize over legibility. Gradually his attention turned to the classic retrograde indication, in which a hand makes only a partial rotation but can move in both directions. At the time, retrograde hands were mostly used to show power reserve. “I realized that weeks and months have a beginning and an end,” he says. He imagined enlarging a pair of retrograde hands to dominate the left and right sides of the dial, such that one would show the day of the week and the other would point at the date.

Together with his collaborator at the time—the up-and-coming Roger Dubuis—he developed the world’s first bi-retrograde mechanism. In 1989, Harry Winston put it into production, the first complicated watch under the Winston name, and the beginning of a multiyear collaboration with the brand.

Today Wiederrecht considers the Harry Winston Double Retrograde Perpetual Calendar to be his breakthrough timepiece, a signature complication that helped define his focus on legibility, his design-driven watchmaking philosophy, and even his ultra-independent approach to business. It is still paying dividends. As head of a small company called Agenhor, he has become the master of retrograde invention for brands including Hermès and Van Cleef & Arpels, winning numerous industry awards including Best Watchmaker at 2007’s Grand Prix d’Horlogerie de Genève. And he has continued to innovate new dial display formats, most recently with a center-mounted chronograph simultaneously released this year by Singer and Fabergé.

Among the innovations introduced by Jean-Marc Wiederrecht for his company, Agenhor, is the AgenGraphe chronograph movement placed in the Carpe Diem table clock for Only Watch 2017  Photo: Courtesy Agenhor

Wiederrecht attributes his success as a watchmaker to a childhood dispute with his father. “My father told me I had to get a baccalaureate,” he says. He disliked the academic milieu, and escaped to the Geneva watchmaking school, the École d’Horlogerie. “But I started watchmaking with an advantage,” he says. “I am skilled not only with my hands but also my head.”

The decade after his graduation in 1972 provided him with another important lesson. He went to work for Châtelain (the company for which he converted gold pieces into watches), garnering ample experience at the bench in the nurturing environment of a family-run business. Then the company was sold to investors who were less interested in handcraft than in building a brand. “It became the same as a big industry,” he says, “but it was worse because it was a small industry, so we did a bad job.” Seeing how unhappy he was, Wiederrecht’s wife proposed that they start their own business. They established an independent workshop in 1978.

And so began the freelance life, with jobs for Chopard, Harry Winston , and Patek Philippe. Working anonymously for these companies, he perfected his craft and had a few more edifying experiences that would inform his career.

The double retrograde perpetual calendar was at the center of these lessons. Before licensing it to Winston, Wiederrecht confides, he and Dubuis planned to produce a bi-retrograde for Patek. They were given an advance to fund their development of the mechanism, and when they showed the results, Wiederrecht says, Patek insisted on acquiring the patent. Wiederrecht instinctually refused, returning Patek’s investment. “If we’d sold it, then my whole career with the retrograde would not have been possible,” he says. Wiederrecht had caught on to the fact that intellectual property is power for an independent, even when the work for a brand is done in secret. “The important thing is to keep the patent for ourselves so that we can choose our clients,” he says. That has been his strategy ever since.

Winston proved to be more flexible about intellectual property. (Entering the complicated watch market for the first time, the company didn’t have the leverage of Patek.) And soon after the Double Retrograde Perpetual Calendar went into production, the brand acquired another valuable asset in Maximilian Büsser, who was appointed managing director of Harry Winston Rare Timepieces.

Büsser was the first person fully to comprehend what Wiederrecht could contribute to a brand, and the two men established the dynamic Wiederrecht came to emulate with every client. “It was a new way of making watches,” he recalls. “I said, ‘Please come with your ideas for the design and we will make the mechanics that go under the dial.’ ” Guided by strong design concepts that were frequently imagined by Eric Giroud, Wiederrecht hit his stride. In the early years of Harry Winston Rare Timepieces, he was responsible for half the complicated watch production. The three-way collaboration peaked in 2009, when Wiederrecht and Giroud produced—and signed their names to—the bi-retrograde Opus 9.

Meanwhile other brands were recognizing Wiederrecht’s talent, and some even started to appreciate the publicity value of giving him credit. Van Cleef & Arpels was at the forefront. Like Harry Winston, Van Cleef & Arpels was primarily known for jewelry. What made the brand unusual was that, as early as 2000, they aspired to make complicated watches for women.

Their initial idea was to create a watch that had a large disc beneath the dial, rotating once a year, displaying the four seasons in bright enamels. The problem was that a big disc would be thick, and baked enamel plates are never flat. Wiederrecht conceived a solution in which a powerful annual rotation module was sandwiched between the dial and the movement. Van Cleef & Arpels proudly marketed the Quantième de Saison as a Wiederrecht invention.

Nicolas and Laurent Wiederrecht, who represent the next generation of Agenhor  Photo: Courtesy

Even more innovative than the mechanism was the introduction of a new watchmaking genre dubbed “poetic complications.” As Wiederrecht explains, these complications use “serious movements to tell stories that are not serious. The watches are only technical on the inside.” In this spirit, Van Cleef & Arpels designers have frequently conceived horological narratives that call upon his retrograde prowess, such as the Pont des Amoureux, in which time is told by the approach of two lovers on a bridge. (The woman’s position signifies hours and the man indicates minutes.)

Further mixing up horological gender stereotypes, Wiederrecht has made his understated approach to women’s complications appeal to men. At Van Cleef & Arpels, he adapted the annual disc to display an astronomical theme: In the Midnight in Paris, the disc shows a map of the constellations over the Parisian night sky, rotating through the seasons.

And his relationship with Hermès has encouraged him to explore the related domain of what he calls “philosophical complications” designed “to consider time differently,” he says. The most celebrated example is Le Temps Suspendu, a watch that stops time at the press of a button, temporarily moving the hands to the 12 o’clock position. The wearer can decide when
to be governed by time and when to seize the moment.

Located in Geneva, Agenhor operates out of a modest building  Photo: Courtesy

The differences between Le Temps Suspendu and the Pont des Amoureux are striking, and the contrast tells an under-the-dial story in its own right. “It’s very easy for me to go from one brand to another,” says Wiederrecht. “I translate what I feel is in the brand DNA, using the pretext of complication to make a piece of art.” And his talent for innovating on vastly different heritages helps to explain why he’s never been tempted to launch a brand of his own. “Making my own brand would be too restrictive,” he says.

Jean-Marc Wiederrecht has followed essentially the same business model for four decades. While he now has the luxury of turning down commissions that don’t engage him creatively, he still lives by his wits, a challenge for a family business preparing for his retirement.

And as he plans to turn over daily operations to his two sons, he has also observed that companies increasingly prefer to make complicated modules in-house. “It is no longer possible for us to produce enough modules to live on,” he says. Instead he sees a future in which Agenhor primarily manufactures complete movements.

As might be expected of Wiederrecht, the movement he has invented provides a flexible foundation for a broad range of designs. And befitting his obsession with legibility, it allows designers to use very big hands because his timekeeping mechanism has a hole in the middle to accommodate centrally mounted complications.

The center-mounted chronographs released this year by Fabergé and Singer already show how much legibility can be improved when hands are positioned at the center of the dial. They also reveal the potential for the AgenGraphe movement to support radically different looks and, says the IP-savvy Wiederrecht, the simultaneous release ensures that the invention is clearly associated with Agenhor rather than just the brands. Wiederrecht believes that other variations under other brand names can support his company for years to come, as can other adaptations, such as a perpetual calendar.

After 40 years, Jean-Marc Wiederrecht has cycled back to the beginning of his career.