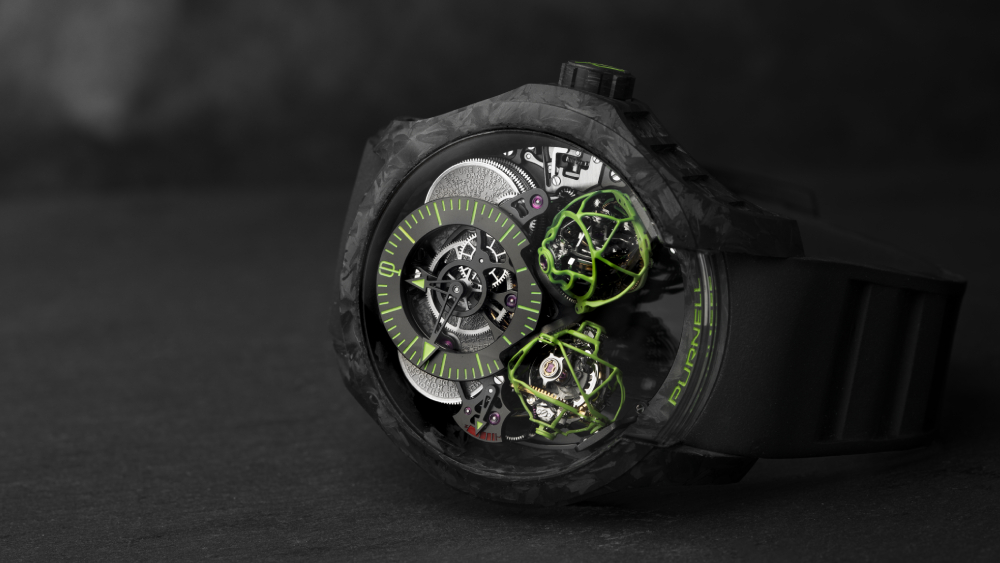 At Purnell, dazzling tourbillons are quite literally in the brand’s DNA, and the version incorporated into its latest riff on the Escape II may be its coolest yet.

Released just last year, the Escape II originally possessed two triple-axis Spherion tourbillon systems developed by behind-the-scenes master Eric Coudray. The latest iterations improve upon those mechanics––the world’s fastest triple-axis tourbillon, according to Purnell––and highlights them via strong colorways that stand out against its 48 mm case profile and are nestled in a distinct aperture along its lower third. This negative space makes its intricacies that much more visible even when you’re not eyeing it directly.

Substantially sized to appropriately support and contain its inner mechanics, the cases also make a distinct aesthetic impression. One iteration titled the Escape II Carbon––which comes with neon green, mustard yellow or crimson detailing––is, as you’d guess, molded from carbon. It weighs a feather-like 50.35 grams and effortlessly fits the wrist thanks to downturned lugs.

This is 35 percent lighter than the Escape II All Black, which is forged from polished DLC titanium with equally inky Spherion cages for a uniform look interrupted only by small red markers on the hands and power reserve indicator. Like its more colorful cousin, it employs specially shaped sapphire crystal for maximum visibility of the six mainsprings (assembled in four barrels) as well as the conical power reserve system.

Operating with a mechanical hand-winding Caliber CP03 movement with 67 jewels, both styles offer 32 hours of power reserve, an impressive figure given how much energy is required to run tourbillons of this variety. And, of course, they require a high-level skill to produce, which means they come with a price tag to match the engineering expertise of their inner mechanical fireworks. The colorful carbon models start at $470,000 while the all-black titanium version starts at a slightly lower $460,000. Head to the brand’s website to learn more.