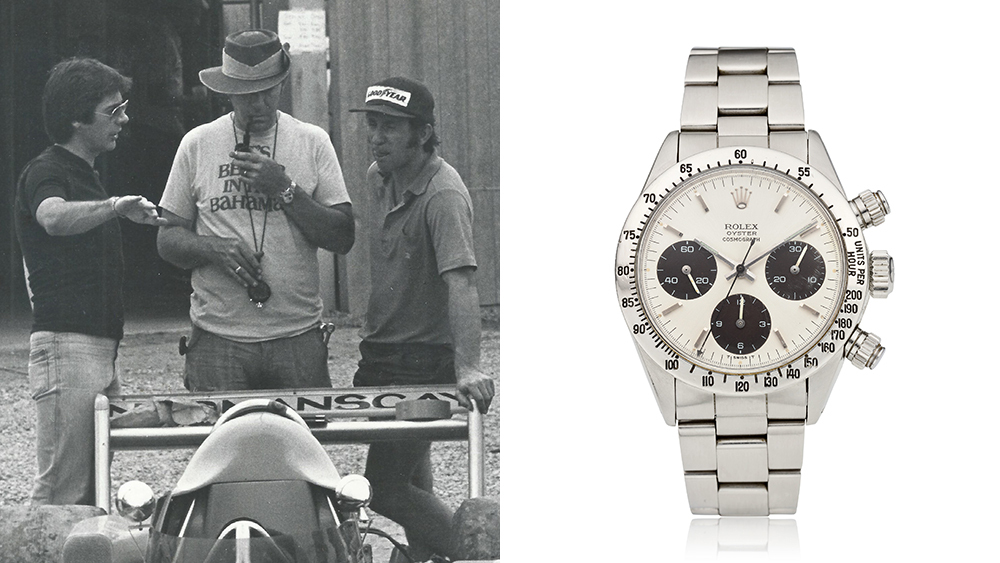 Another automotive racing legend’s Rolex Daytona is up for auction at Christie’s “Watches Online: Discovering Time” sale on now through October 13th. Carroll Smith, who was best known for working with Carroll Shelby and the Ford Motor Company on the GT40 Le Mans Project (the subject of the Christian Bale and Matt Damon flick Ford vs. Ferrari), wore his Rolex Oyster Cosmograph Daytona Ref. 6265 as his daily watch throughout his storied career and now it’s hitting the block straight from the hands of Carroll’s son, Chris Smith.

“The watch was a gift from Bill Cuddy, who was a serial businessman and entrepreneur and a semi-pro race driver through the ‘60s and ‘70s,” Smith told Robb Report. “It was a gift because my father was the team manager and engineer for a McLaren M8 CanAm car. The back of the watch is inscribed with the Cuddy Racing logo.”

Cuddy was known as a bit of a renegade. He and his son made headlines in the ’70s for robbing comedian Red Fox’s wife of her jewelry in order to fund his racing endeavors. “Bill had a number of businesses and it went very well, but at one point things went bad and he ran out of money,” says Smith. “We actually used to go see him in jail when I was a kid. I was 12 or 13 years old. I’m sure my dad wore the watch, which is kind of funny. It was his daily watch.” For the record, the heist took place several years after Cuddy gifted Carroll Smith the watch, but his son admits that while they were not aware of Cuddy’s outlaw inclinations at the time, they may never know where the money came from to pay for the piece.

“These guys were adrenaline junkies,” says Christie’s watch specialist Michael Fossner. “They were modern cowboys if you will.” The watch, as a result, lived its life in the fast lane and Fossner says it comes with the dings and scratches you would expect of a watch worn daily by an automotive racing engineer. There are some service parts on the watch, but no after-market components and it has not been relumed—timepieces in their original condition that have not seen extensive overhauls command higher prices at auction. The Daytona, however, has seen plenty of wear throughout a life well-lived. “This isn’t one of those watches that was forgotten until somebody decided to make a buck,” says Fossner.

Its provenance will, of course, be its biggest selling point outside of the fact that it’s a coveted Ref. 6265 and there Smith’s son has an entire photo album to prove its authenticity. A photo accompanying the sale (which does not come with the watch), shows Carroll Smith pictured in the piece during the ’70s standing next to semi-pro racer Terry Knight. “The driver, the dark-haired gentleman standing with my dad, is Terry Knight,” says Smith. “He was the founder and one of the original members of the rock group Grandfunk Railroad. He also had a solo career and went on to produce a lot of big bands. He was a real mover and shaker in the music industry.”

Like Cuddy, he was also known for having a penchant for the underworld. The men are seen standing next to a “Norman’s Cay” branded race car, which happened to be the location of choice for Knight’s shady deals. “Norman’s Cay was the island the Pablo Escobar Medine cartel used as their pit stop for their activities,” says Fossner. “That was the main center of everything before coming into the U.S. So that was a big thing to do with Terry Knight, but it also shows these guys were a bit rough around the edges. This car was funded by one of the biggest criminal organizations ever to exist.”

Smith was not known to be wrapped up in Cuddy or Knight’s criminal activities. According to Smith’s son, at the time he was in the early aughts of his teenage years and these guys were nothing more than “dad’s friends.” He frequently rode motorcycles with Knight and remembers shooting pool with Paul Newman at his house on the very table where scenes from The Hustler were filmed. “When you’re 12 or 13, you don’t really know who these people are,” says Smith, but he would have later encounters with Newman when he followed in his father’s footsteps to begin racing himself. “Because I knew him through racing, the acting never really came up,” says Smith. “But I want to say he was quiet. He was very self-assured and confident, of course, but not gregarious or outgoing. If you didn’t know who he was, you wouldn’t suspect he was anyone of importance other than the fact that he was a striking-looking person.”

It was the blockbuster sale of Newman’s own Rolex Daytona in 2017 for $17.8 million that got Smith thinking about parting with his father’s Ref. 6265. He says that while he’s had the watch for years, its increasing value prohibited him from feeling comfortable wearing it and he’s “hopeful that someone will get it and appreciate its history and put it out there in the world where it belongs.”