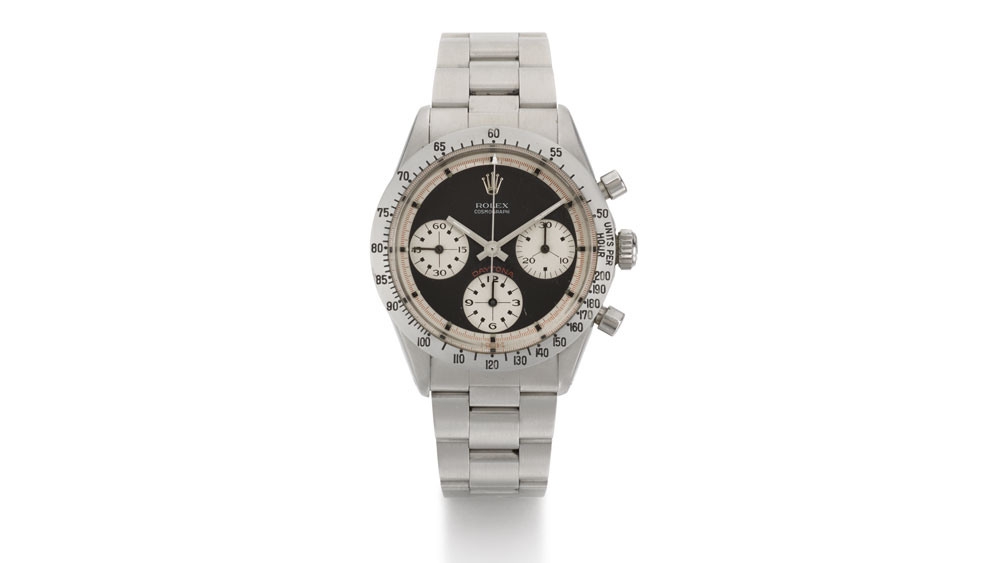 Out of all the vintage models in the Rolex pantheon, the Ref. 6239 is the one most commonly referred to as a “holy grail.” Introduced in 1964, the watch has been linked with Newman since the 1980s, when he was seen wearing it on and off the racetrack. Newman’s own Daytona famously sold at Phillips’ New York sale in October 2017, where it fetched $17.8 million (including buyer’s premium), setting a new record for the highest price ever achieved for a wristwatch at auction.

Since that sale, the hoopla over the near-mythical Rolex reference has only intensified. The 37 mm stainless steel model going on the block at Sotheby’s has all the essential elements associated with the Ref. 6239: a Valjoux 72 manual-winding movement and a black “Paul Newman chronograph dial” bearing three perfectly proportioned white subdials.

Estimated at $73,500–$110,000, the c. 1968 Daytona, which belonged to Jim Russell for decades sold yesterday for $131,563 at current exchange. Between 1953 and 1959, Russell was a 64-time winner of Formula 3 and an 11-time winner of Formula 2. In 1959, Russell survived a crash at Le Mans that ended his driving career, but signaled the start of a new chapter in motorsports history: As founder of the Jim Russell Racing Driver School, he went on to tutor some of the greatest drivers in the industry, including Emerson Fittapaldi, Derek Bell, Tiff Needell, Danny Sullivan, Jacques Villeneuve, Jan Magnussen, Jenson Button and Lance Stroll.

“Since its creation in 1963, the Rolex Daytona 6239 ‘Paul Newman’ has become an icon on and off the racing track,” says London watch specialist Kate Lacey. “It is therefore a great privilege to be able to offer this 1968 model owned by racing legend Jim Russell. It is amazing to think that the watch has been worn and used throughout Russell’s life for the purpose it was designed for. With its calibre Valjoux 72 and very legible Paul Newman dial, the watch would have accompanied Russell throughout his career as a driver and an instructor.”