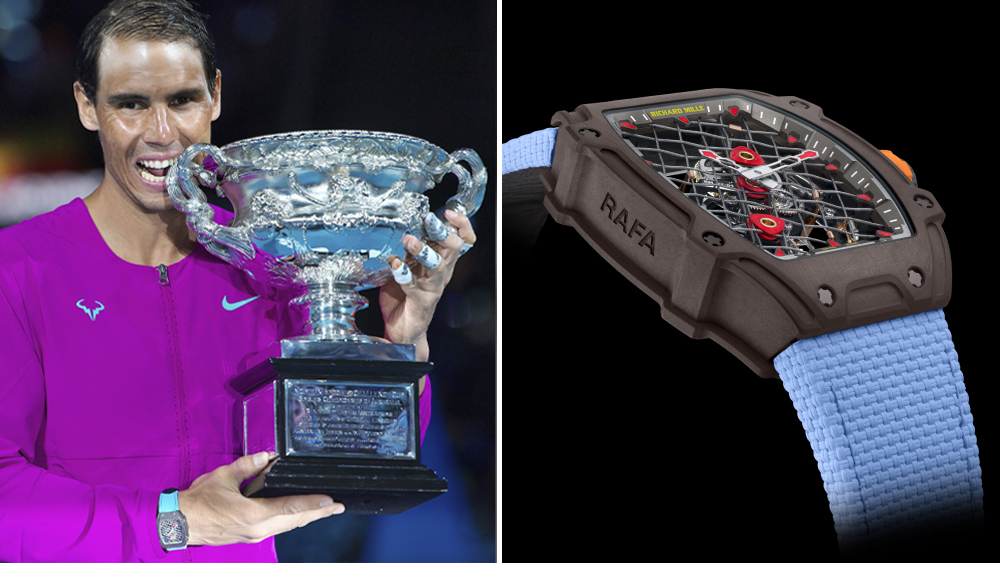 Rafael Nadal just took another Grand Slam title with a Richard Mille watch on his wrist.

The 35-year-old tennis pro defeated Daniil Medvedev after five grueling sets on Sunday to win the Australian Open with his lucky $1 million tourbillon in tow. The Spaniard was wearing the very same timepiece when he won the French Open back in 2020.

The wrist candy, known officially as the RM 27-04, was designed by the Swiss watchmaker especially for the King of Clay to celebrate a decade of fruitful collaboration. As you might expect, the timepiece is tough yet light, which makes it perfect for the court.

The case is crafted from Richard Mille’s exclusive high-performance polyamide material, known as “TitaCarb,” which is reinforced with 38.5 percent carbon fiber content to make it extra strong. It’s featherlight, too, tipping the scales at just 1 ounce (30 grams).

Fittingly, the watch has an athletic aesthetic inspired by Nadal’s sport of choice. Evoking the stringing a racket, a special gossamer steel cable has been woven together to create a mesh structure to which the skeletonized manual movement (with 19 jewels and a 38-hour power reserve) has been affixed. The “strings” reportedly reduce the amount of friction and impact sustained over the course of a tennis match. In fact, the suspended tourbillon caliber can resist accelerations of more than 12,000 gs. That’s a new record for the brand and just enough to counter a certain Spaniard’s blistering forehand.

Not to mention, it’s the watch of choice for the newly crowned king of men’s tennis. Nadal’s win over the weekend, which marks his 21st major title, has pushed him above Roger Federer and Novak Djokovic, who are both tied on 20 Grand Slam singles victories.

The RM 27-04 is available exclusively at Richard Mille boutiques worldwide for $1 million. Just 50 were made, though, so you’ll need to be as quick as Rafa to get one.