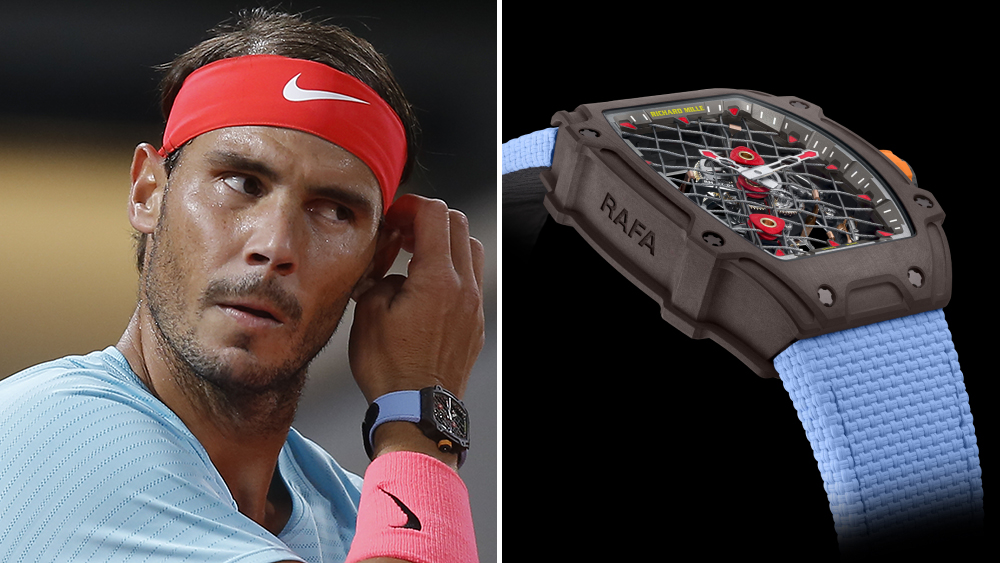 Rafael Nadal is acing the watch game at this year’s French Open. The 34-year-old tennis pro, who last Tuesday obliterated Italy’s Jannik Sinner in straight sets, has been wearing a $1 million-dollar Richard Mille timepiece throughout the entire tennis tournament.

The wrist candy in question was made for the King of Clay by the storied Swiss watch brand to mark 10 years of fruitful collaboration. The tourbillion, known as the RM 27-04, weighs just 1 ounce (30 grams) yet is tough enough to withstand taxing on-court play. In fact, the watch’s suspended tourbillon caliber can resist accelerations of more than 12,000 g’s (or Rafa’s blistering forehand) and is a new record for the brand.

As to be expected, the watch takes a few design cues from the Spaniard’s beloved sport. The watchmaker secured the inner workings in the same way one would string a tennis racket. A special gossamer steel cable was woven together to make a mesh structure to which the skeletonized manual movement (with 19 jewels and a 38-hour power reserve) was secured. These strings are said to limit the excessive friction and impact sustained over the course of a tennis match. It also makes for a striking visual feature and adds to the athletic aesthetic.

The groundbreaking design was, fittingly, inspired by a tennis racket.  Courtesy of Richard Mille

On top of that, the durable case is crafted from “TitaCarb,” which is exclusive to Richard Mille. This high-performance polyamide material is reinforced with ith 38.5 percent carbon fiber content to make it one of the strongest of its kind.

Not to mention, it may also bring about good luck. While wearing the timepiece, the current World No. 2 and 12-time French Open winner has steamrolled his way to the top of the tournament and will face Argentinian Diego Schwartzman in the semi-finals tomorrow (Friday, October 9). Godspeed, Rafa.

Just 50 RM 27-04 watches were made and are available exclusively at Richard Mille boutiques worldwide for $1,050,000.