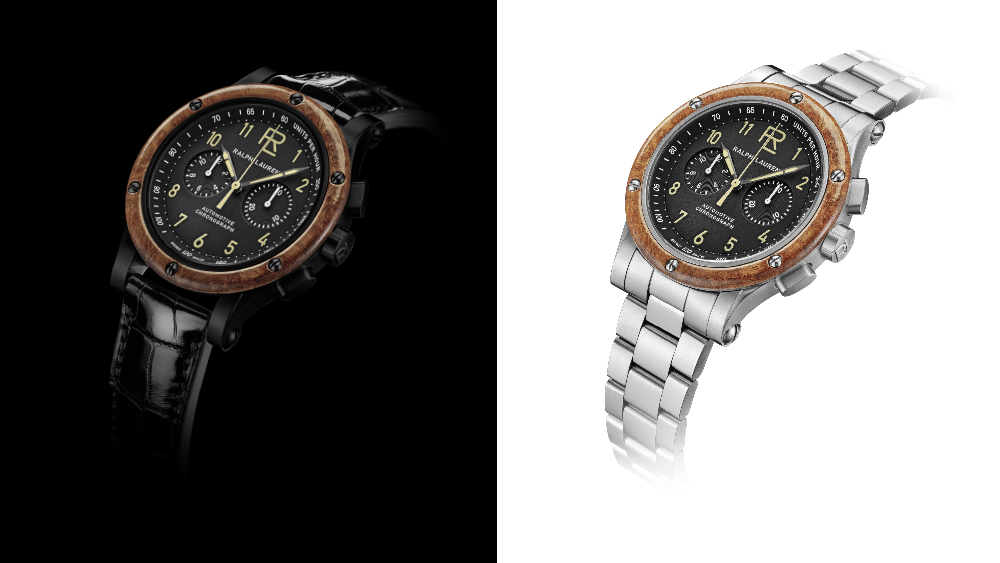 Ralph Lauren’s love for (and collection of) antique cars has spawned a number of coveted auto-inspired products. The latest in this line of road-to-real-life design objects is a brand new chronograph.

The RL Automotive Chronograph Woodbezel Watch takes its inspiration from the flowing lines and rich materials of Lauren’s own 1938 Bugatti Type 57SC Atlantic Coupe. With a 42mm case, the model comes in either stainless or blackened steel and houses a mechanical self-winding movement manufactured by Jaeger LeCoultre that achieves 65 hours of power reserve. And though not designed for diving, it is water resistant to 100 meters.

A domed sapphire crystal covers the face, which features two subdials (one to measure hours and another for minutes) and is surrounded by a beautifully patterned Amboyna burl bezel. This natural hardwood is often used in the interiors of luxury automobiles and its swirling grain adds an organic touch to the sleek metallic piece. Plus, it’s the same kind of wood carved for use in the Type 57SC’s steering wheel. The versions come with either a matching steel bracelet or glossy black alligator strap which can be easily swapped out. The watches are available from $9,900.

Now considered one of the world’s most valuable vehicles––one example which hasn’t even been found yet is estimated to start at $100 million––the Type 57SC Atlantic Coupe was originally developed as a version of the Type 57. This initial model was made as both a production piece and race car variant, but stopped rolling off the assembly line in 1940. Only about 800 were ever produced and their flowing lines have bewitched collectors ever since.

It’s fitting Ralph Lauren should have one in his extensive automotive archive. Estimated by Forbes to be worth at least $300 million, the collection includes more than 70 rare cars. (The Bugatti is one of only two known to exist). From the 1929 Bentley 4.5-liter ‘Blower’ which raced at Le Mans in 1930 to the 1955 Mercedes Gullwing, they collectively act as a private auto museum and, now, a wellspring of inspiration for the horologically minded.