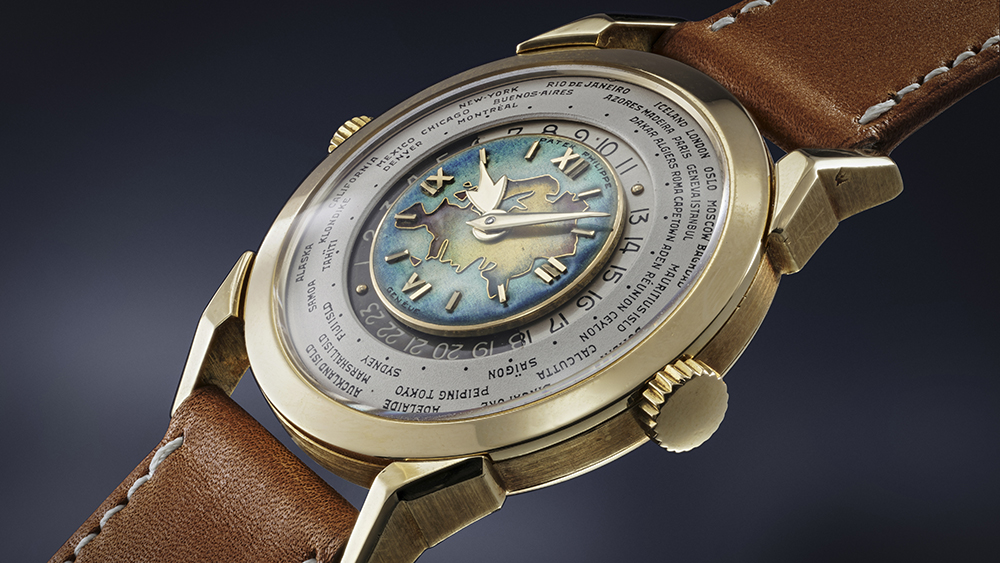 Phillips has unearthed the crème de la crème of Patek Philippe timepieces for its upcoming Geneva watch auction. The coveted wrist candy, Ref. 2523, is expected to reach just shy of $4 million when it goes under the gavel in May.

The world timer watch sports an immaculate cloisonné enamel dial with a depiction of the Eurasian landmass. It’s this distinctive feature that quite literally, put it on the map. The storied Swiss watchmaker is believed to have produced just 11 timepieces with this topography-themed face: five depict North America, three display South America and another three feature Europe and Asia.

It has been nearly two decades since the last Ref. 2523 with a Eurasian map appeared on the market. This particular model, which was actually the first of the trio to be produced, has laid dormant for several years. One of its counterparts resides in the Patek Philippe museum and the other is in a private collection.

Ref. 2523 was first launched in 1953 and features a 36 mm yellow gold case that was actually considered to be quite oversized for the time. It sports two crowns—one for winding the watch and the other to control the city ring, the complication that enables the wearer to find the current time in the 40 cities listed around the watch’s circumference. The face itself features hues of marine blue, green and turquoise that contrast the gleaming gold accents and brown leather strap elegantly.

Unsurprisingly, the rarity is poised to fetch a pretty penny. It will lead The Geneva Watch Auction: XIII held by Phillips in association with Bacs & Russo come May 8 and estimated to reach in excess of $3.7 million (CHF 3.5 million).

It’s been nearly 20 years since the last reference 2523 with a Eurasian map hit the market.  Phillips

“The present reference 2523 with cloisonné enamel dial is truly the end game for many collectors,” Aurel Bacs, senior consultant at Bacs & Russo, said in a statement. “Arguably, it is difficult to find a more abused term in the world of watch collecting, but this is the one instance where the word can be used with its original undiluted meaning: the present watch is—simply put—one of the most sought-after, unobtainable, attractive and fabled timepieces in the world.”

Interested? The coveted collectible can be viewed at the Phillips office on New York’s Park Avenue from March 29 to April 1.