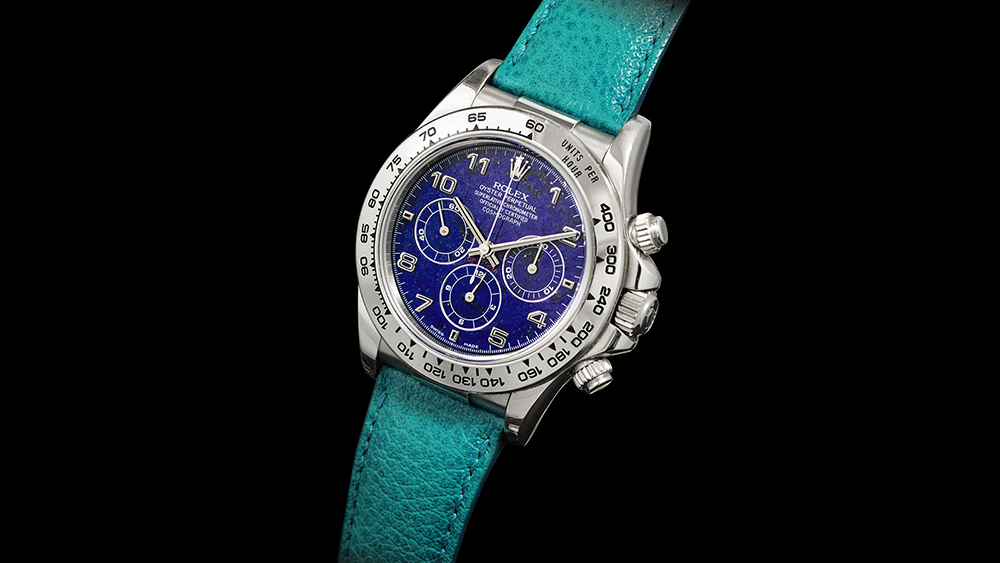 The Rolex Daytona is the holy grail of the watch world, and one rare example just added a whole new title: the most expensive automatic chronograph ever sold.

Reference 16516 was snapped up for a bonkers $3.27 million at Sotheby’s Hong Kong watch auction on Saturday, eclipsing its high pre-sale estimate of $1 million by more than three times. The $3 mil wasn’t enough to break the record for all Daytonas—that belongs to a Paul Newman Daytona which sold for $17.75 million in 2017—but is an impressive sum nonetheless.

So, what makes the timepiece so special? According to the auction house, it’s the only known platinum Daytona with a lapis lazuli hardstone dial. It was manufactured in 1999 and is believed to be one of only a handful of platinum watches produced that year.

“While Rolex produced automatic Daytonas only in stainless steel, yellow gold, white gold, and steel and gold for many years, it has now been confirmed that one very lucky customer was given a unique masterpiece in 1999, and it is rumored that the late Patrick Heiniger, the famous CEO of Rolex, himself wore a platinum automatic Daytona,” Sotheby’s wrote on its website.

The watch also features the famed caliber 4030 automatic movement with 31 jewels, which was based on the Zenith El Primero movement. Rolex replaced this Zenith movement a year later in 2000 with its own in-house automatic chronograph caliber.

On top of that, the watch is unequivocally striking. The unique lapis lazuli hardstone dial is fitted to a bright turquoise calf strap with a platinum folding clasp. The 40mm case is crafted entirely from the precious metal and has a classic screw-down back. It’s also engraved with “XII 1998” and bears the number A171132.

The Important Watches sale brought in a total of $15 million and had a number of strong performers. In addition to the record-breaking Rolex, other highlights include a Piaget Gouverneur that sold for $314,511 (more than double its estimate) and a Philippe Dufour Simplicity which sold for $290,318.