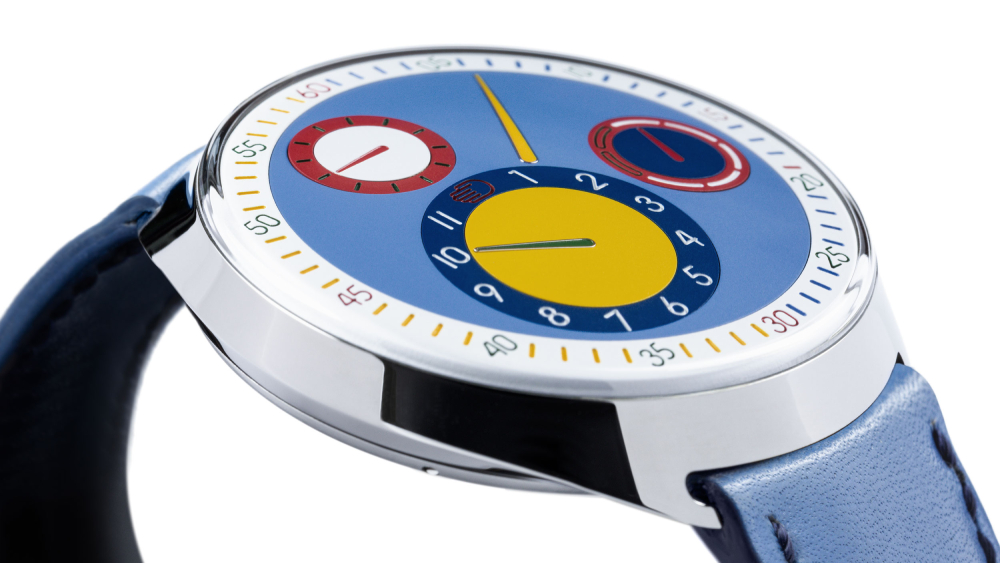 Swiss watchmaker Ressence has teamed up with Sotheby’s to auction a unique timepiece whose proceeds will benefit Covid-19 relief.

Unveiled on Monday, the Type 1 Slim “Ayrton & Finlay” was inspired by the winning design from the #WatchAgainstCovid19 competition put on by both firms in April. The winning model––which was envisioned by Raymond Ramsden of England and named for his two children––is set to hit the auction block for Sotheby’s Hong Kong ‘Important Watches’ sale with proceeds benefitting KU Leuven University’s Covid-19 Research Programme.

“When we first saw Raymond’s design, we gave it a few nicknames: the Mondrian-watch, the Super-Swatch®, the Lego®-watch, but the real watch is beyond any comparison: it stands out from anything I’ve seen so far in the watch world, both aesthetically and philosophically,” said Ressence founder, Benoît Mintiens, in a statement. “It is fresh and vibrant; it pops.”

The timepiece’s case is as colorful as the watch itself.  Courtesy of Ressence

An interpretation of a recent Ressence model, the Type 1 Slim, it has a polished titanium case and a dial featuring the many complications the maker is known for. And its bold color scheme isn’t merely meant to be visually arresting. Ramsden’s design celebrates human values and pays tribute to the dedication of key workers during the coronavirus pandemic by using specific hues. For example, blue represents the medical staff and others instrumental in helping society get through the pandemic while red symbolizes human interaction and the importance of washing hands to limit the disease’s spread. The blue subdial represents our shared plant and the burst of yellow represents the sun at the center of our solar system.

“My Ressence journey began with a simple thought: ‘we are all in this together'”, Ramsden said in a press release. “When my humble design of global symbolism was chosen amongst hundreds of entries, I felt proud and excited to be a part of such a worthy and noble cause.”

This final design––tweaked only slightly from its original incarnation for production purposes––was selected from 466 submissions submitted over a period of three weeks between April 28th and May 12th. So far, it is estimated to fetch between $20,000 and $40,000 when bidding begins on July 11th.