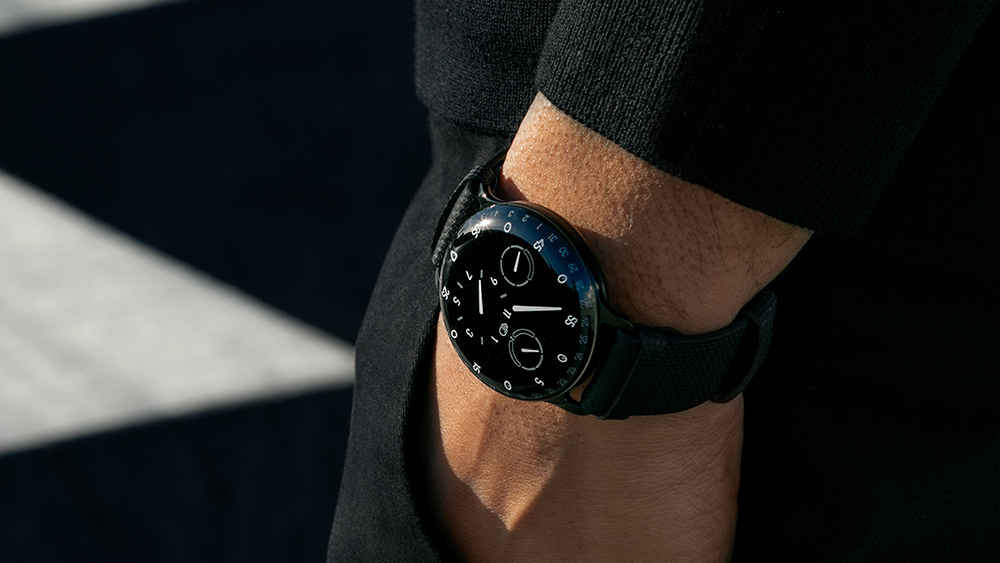 Belgian watchmaker Ressence is back with a third take on its award-winning Type 3 timepiece.

Dubbed the Type 3BBB (which stands for, erm, ‘Black, Black, Black’), the oil-filled mechanical watch is the first in its series to feature a polished black DCL (diamond-like carbon) coated case in grade 5 titanium. The extremely hard varnish prevents the 44 mm example from galling and corrosion, while the figure’s crown-free case and an edge-to-edge sapphire crystal—on its front and caseback—help elevate its design. It’s supposed to resemble a smooth, black pebble that has been shaped by time and water. The limited-edition piece is being produced for one year, ending on December 31, 2022.

Collectors of the Type 3B and Type 3BB will notice the changes to this edition’s dial. Bright colors have been removed from its indices and sub dials—the former releases included pops of yellow, red and blue. Instead, white and light gray offer a more minimal aesthetic and, with the removal of the second hand, makes the watch more reminiscent of the brand’s GPHG-winning original design. It also displays green Super Luminova in dark settings, as opposed to the shade of blue used in other editions.

Made up of 215 parts, Ressence’s Orbital Convex System (ROCS) was developed in-house and calculates the hours, day and date. Famously, this system is also what allows the elements of the dial to swirl around each other over time. It’s driven by the minute axel of the manufacturer’s 2824/2 calibre and delivers 28,800 vph with a 36-hour power reserve.

The watch’s oil-filled display uses a “water-drop” effect for crystal-clear legibility. Oil and glass share similar responses to light refraction. Because of this, when the space between a dial and glass is filled with oil, the eye is tricked into momentarily losing its depth perception, according to the watchmaker. The result is that the dial seems even closer.

Ressence was founded in 2010 by Benoît Mintiens. It specializes in unique horological creations and originally started out deconstructing traditional watches. As winners of the 2013 Horological Revelation Award at the Grand Prix d’Horologerie, the brand is known for combining its unique take on fine watchmaking with Swiss-made calibers.

You can purchase the glossy Type 3BBB watch now for $39,900 at Ressence.com.