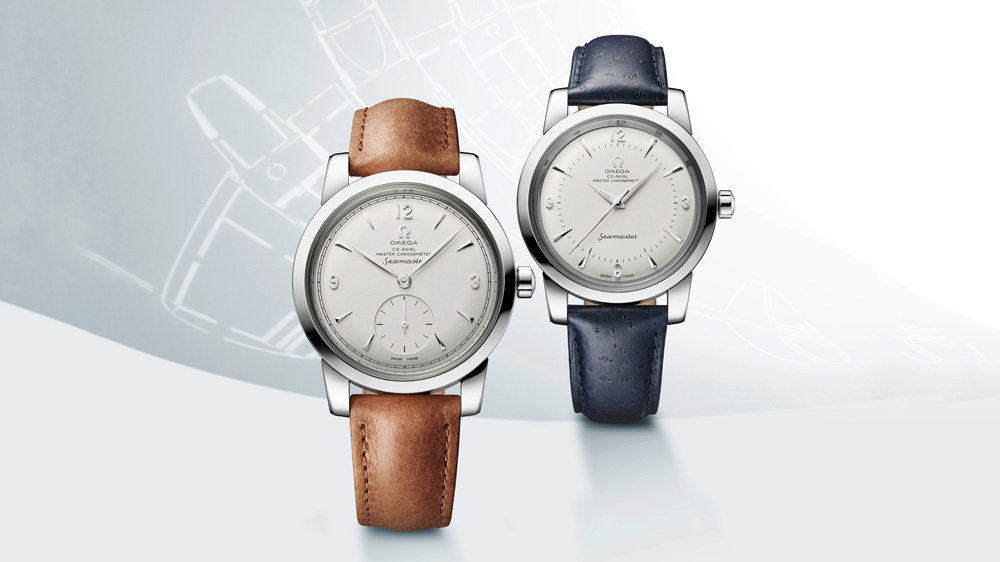 This year marks the 70th anniversary of Omega’s Seamaster Collection, the watchmaker’s first family of watches. To celebrate, Omega has launched two new classic limited-edition 1948 Seamaster timepieces. In keeping with current industry trends, both watches were crafted in a vintage aesthetic, and the history behind the duo will appeal to those interested in WWII-era timepieces. The Seamaster was born as a commercial take on timepieces developed with the British Ministry of Defence (MoD) between 1940 and 1945 for use by the Royal Air Force and other branches. Twelve watchmakers—Omega, IWC, Jaeger-LeCoultre, Longines, Buren, Cyma, Eterna, Grana, Lemania, Record, Timor, and Vertex—known as the “Dirty Dozen” created timepieces for the British MoD during WWII. According to records kept at the time, Omega supplied the largest number with 110,000 timepieces created for use in combat.

Post-WWII, Omega decided to capitalize on its shockproof, chronometer-standard, water-resistant utilitarian timepieces by developing civilian versions in the Seamaster collection for the public in 1948. While the design elegantly pays tribute to the era, including a vintage Omega symbol, the interior features thoroughly modern, antimagnetic automatic movements with coaxial escapements. And the model featuring the small-seconds register with leaf-designed hands features a brand-new movement in the caliber 8804. Why create a new movement for a relatively simple function? “Because all of our movements one day are going to be master chronometers, we are developing other movements now for the future with small complications—things like a small seconds, which are not complicated to do but we need in our collection,” said Jean-Claude Monachon, vice president and head of product development at Omega. “So we do not have the same movement from the original 1948 because it would be too complicated.”

Other updates from the original include a larger-size timepiece, expanding it from 34 mm to 38 mm, and water resistance of up to 200 feet. On the caseback, Omega’s Naiad lock—a patented system that locks the caseback to ensure that all engravings on the rear of the watch stay oriented in the correct position—is engraved with “Seamaster, Limited Edition” along with the timepiece’s edition number. In an appropriately subtle reference to its historical ties, the sapphire crystal on the caseback is engraved and hand-lacquered with a Chris-Craft boat—the company created boat motors and crafted 12,000 small boats for the U.S. military during WWII—and Gloster Meteor aircraft, the first fighter jet used by the Royal Air Force.

The timepiece with the small seconds comes on a brown leather strap (6,200 CHF or $6,420 at current exchange), and the central second model (5,700 CHF or $5,900 at current exchange) with Dauphine-style hour and minute hands comes on a sturgeon navy leather strap. Both are limited to 1,948 pieces and come in a special soft brown collector’s box containing a spare NATO strap in Admiralty gray.