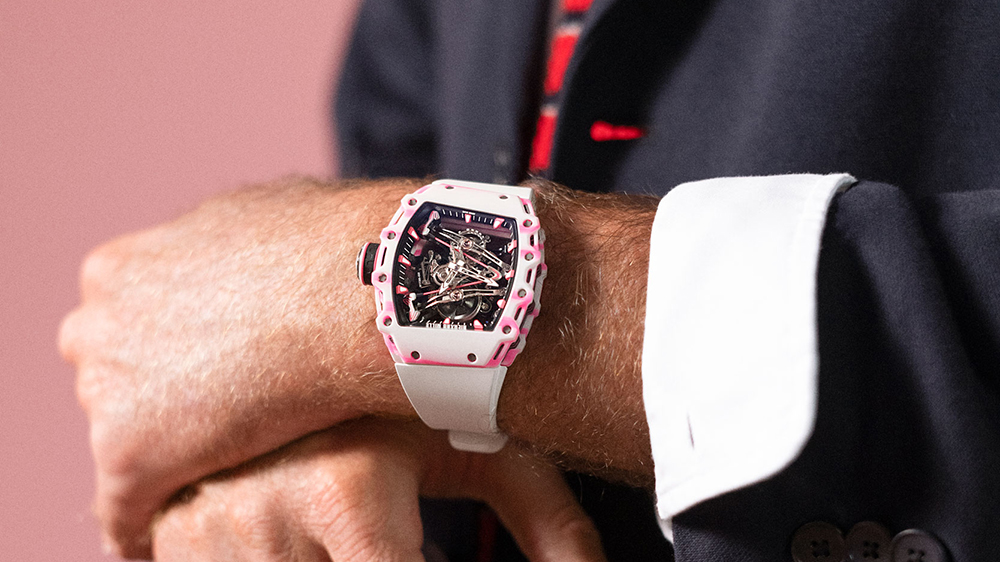 Richard Mille and PGA Tour golfer Bubba Watson might have just scored a hole in one.

Watson, who’s been an ambassador for the Swiss watchmaker since 2011, has for years asked the brand to create a bright pink watch. The eye-catching hue is the same color as his signature drivers, which he’s been using for most of his professional career, perhaps most notably in charity drives. That vibrant color is the first thing you notice about the new RM 38-02 Tourbillion, the fourth Richard Mille timepiece to bear Watson’s name.

Instead of a metal case, the watch features a combination of Carbon TPT and Quartz TPT—both exclusive materials to Richard Mille—which make it extremely durable and lightweight. Its striking skeleton dial acts as a stage for the time-only tourbillion movement, which is suspended by PVD-treated grade 5 titanium bridges. The watch also houses an in-house calibre RM38-02 manual-winding movement which achieves up to 70 hours of power reserve. You can examine the movement from either side of the case thanks to its transparent crystal sapphire caseback.

It’s all in the wrist.  Richard Mille

Watson is hardly the only Richard Mille ambassador who was recruited from the top tier of the sports world. Earlier this month, world record-holding diver Arnaud Jerald tested a new RM diver during the Les Voiles de St. Barth boat race. In January, tennis great Rafael Nadal won the Australian Open—and set an all-time Grand Slam record—wearing one of the brand’s $1 million tourbillons. And late last year, Olympic fencer Miles Chamley-Watson signed on as one of the brand’s newest faces.

If you have your sights set on the new RM 38-02 Tourbillion, you’d better move fast. The watch is limited to just 50 pieces. Visit the Richard Mille website for more details.