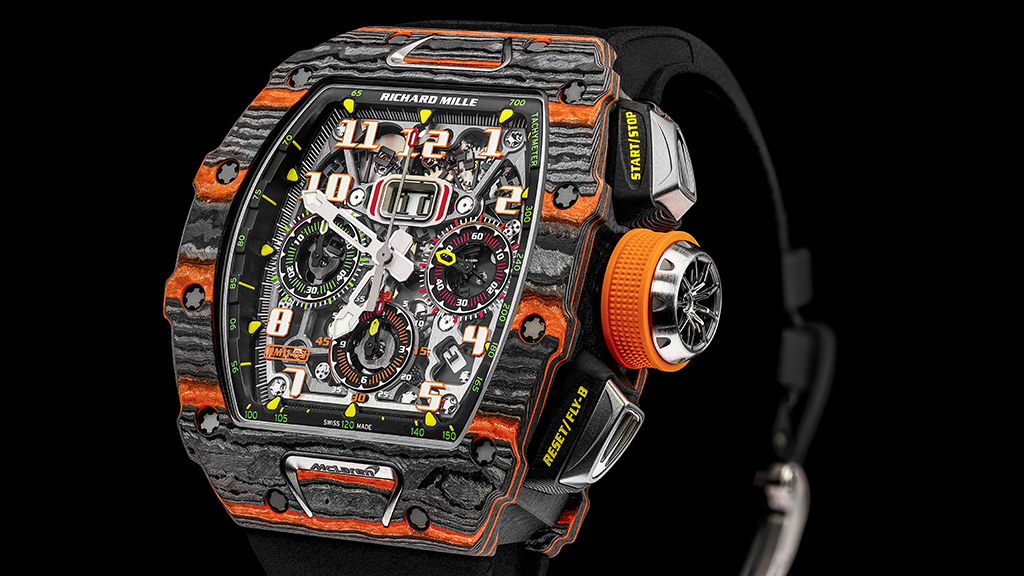 Richard Mille and McLaren joined forces on their first-ever collaborative timepiece, the RM 11-03 McLaren Automatic Flyback Chronograph (180,000 CHF or $189,360 at current exchange), which debuted this week at the Geneva Motor Show. Limited to just 500 pieces, the timepiece is initially available only to owners of a McLaren Ultimate Series. McLaren clients that purchase the timepiece will be able to match the edition of their limited McLaren Ultimate Series car (1 to 500) to the caseback number of their RM 11-03 McLaren.

The collaboration was conceived by McLaren’s design director, Robert Melville, and Richard Mille’s engineer Fabrice Namura. The McLaren 720S—a favorite of Namura—was one of the inspirations behind the design and is Robb Report’s No. 2 Car of the Year. The titanium pushers on the case mimic the design of the 720S’s headlights, while the grade 5 titanium crown features the design of the lightweight wheel. The titanium inserts have a similar shape to the McLaren F1’s air-intake snorkel.

Like its muse, this timepiece was built for performance and aesthetics and features a case made from Carbon TPT (for durability) interlaced with Orange Quartz TPT for flexibility in design. Richard Mille first introduced Carbon TPT (Thin Ply Technology, a method for layering fibers) to watchmaking in 2013 on its RMO11 and later developed Quartz TPT for its RM 27-02 Rafael Nadal Tourbillon. The North Thin Ply Technology company, which develops TPT materials for Richard Mille, initially created TPT for the sails of racing yachts, and it has since been used in aeronautics, golf, and Formula 1 racing for its sturdiness and light weight.

The watch can be adjusted for personalized winding based on its wearer’s activity level, and the movement features a 55-hour power reserve. The RMAC3 caliber was first launched by Richard Mille in 2016 with a flyback chronograph that instantly returns the counter to zero so that the stopwatch function can be quickly restarted for racing. Richard Mille also created a new baseplate and bridges that are made from PVD-treated grade 5 titanium, which improved the function of the gear train. The dial features an annual calendar, an oversized date, and a 12-hour chronograph and countdown counters.

The technology behind this piece should be appreciated by all, and if you’re a McLaren Ultimate Series owner, it will be hard to pass up.