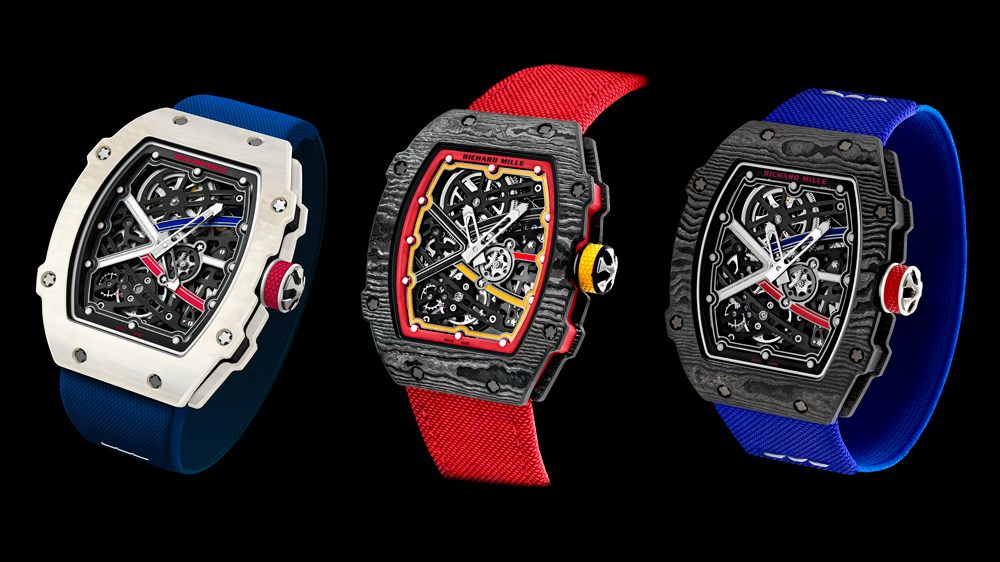 Richard Mille’s new versions of its lightest sports watch, the RM 67-02 ($120,500), will now take a spin on the wrists of pro athletes Alexander Zverev, Alexis Pinturault, and Sébastien Ogier. The Swiss watchmaker has created three new timepieces dedicated to each of the athletes. Weighing just 32 grams (strap included) with a 38.7 mm case, the RM 67-02 is the lightest automatic watch in Richard Mille’s collection. The three sportsmen will put the timepiece to the test on the tennis court (Zverev), the slopes (Pinturault), and the Formula 1 circuit (Ogier). Each timepiece has been designed in the colors of the athlete’s country.

German tennis player Alexander Zverev, who is now ranked No. 3 in the world, will sport a red, yellow, and black RM 67-02 made from Carbon TPT (Thin Ply Technology, a durable method of layering fibers) and red Quartz TPT. A white Quartz TPT–cased watch with a blue strap and red accents on the crown and dial was bestowed to French alpine ski racer Alexis Pinturault, who boasts 17 World Cup victories as of 2016. A variation on that color scheme was created for French five-time World Rally Champion Sébastien Ogier. His watch features a black Carbon TPT case with a blue strap and white, red, and blue accents on the hands, dial, and crown.

The special recipe for the RM 67-02’s lightweight design lies in its CRMA7 in-house caliber, made of a grade 5 titanium baseplate and bridges, along with the timepiece’s advanced materials: Carbon TPT and Quartz TPT. Richard Mille first introduced Carbon TPT to watchmaking in 2013 on the RM O11. The material was created for Richard Mille by the North Thin Ply Technology company, which originally developed TPT for the sails of racing yachts, and it has since used the material for Formula 1 racing, aeronautics, and golf. To top it off, the watchmaker introduced a new seamless strap with elasticity for adapting to the change in size of its wearer’s wrist during certain sporting conditions.

The first RM 67-02s created were made for South African sprinter Wayde van Niekerk and Qatari high-jumper Mutaz Essa Barshim. Richard Mille also has two prototypes currently being tested out by Formula 1 racers Charles Leclerc of Monaco and Fernando Alonso of Spain that will eventually be made into future models. The new RM 67-02s for Zverev, Pinturault, and Ogier are available now worldwide at Richard Mille boutiques and authorized retailers only.