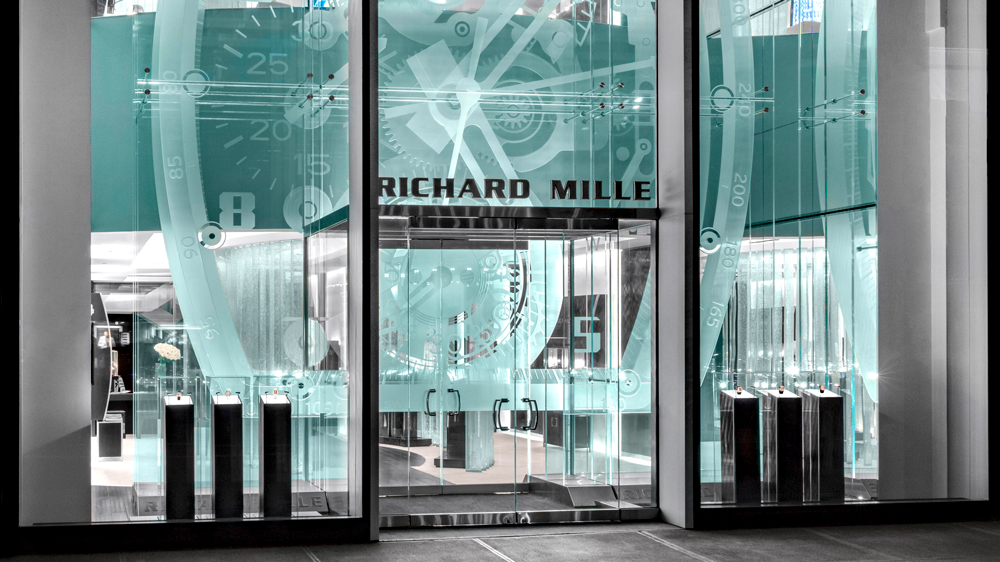 Richard Mille has finally opened its much-anticipated flagship boutique in New York City—its largest store in the world and its ninth in the Americas. The two-story, 4,200-square-foot storefront at 46 East 57th Street is not only noteworthy for its size but for what it represents as part of the brand’s strategy moving forward. The Swiss watchmaker recently announced its withdrawal from the upcoming 2019 SIHH (Salon International de la Haute Horlogerie) watch trade show, citing its growing number of Richard Mille boutiques and its drastic reduction of a presence in multi-brand stores in an effort to connect directly with consumers as one of its reasons for no longer needing a presence at the trade show. Shortly after that announcement, on the same day, Audemars Piguet announced it would be following suit.

It marks a growing trend of direct-to-consumer models in the watch business as brands try to evolve to the changing marketplace. Richard Mille will be luring in its well-heeled clientele with a 30-foot-high glass façade, a two-story transparent wall illuminated by 156 feet of LED lights, and 24 panels of floor-to-ceiling glass (weighing 37,000 pounds) individually engraved and arranged in threes that form a sculptural rendering of the watchmaker’s RM 008 tourbillon movement. The boutique also happens to anchor 432 Park Avenue, also known as the world’s tallest residential tower in the Western Hemisphere. In other words, you can’t miss it.

Inside, clients will find a custom elevator in the center of the store, transporting guests to the mezzanine level, which was crafted with elements that mimic Richard Mille’s watchmaking. The transparent cab and shaft allow a full view of the elevator’s inner mechanics at work and the details of each part inside, much like the design of Richard Mille’s watches. Encased in curved, three-layer glass panels that are brushed, polished, and chamfered just like the brand’s timepieces, the shaft is illuminated and ultimately creates the appearance that the elevator is floating up and down within the store.

The elevator doors open onto the mezzanine, which has a bar, a lounge, VIP consultation rooms, and a display of the ladies’ and automatic timepieces—all of which overlook 57th street. On the bottom floor, a series of individual vitrines highlight Richard Mille’s high-complication timepieces, which illustrate the history of the brand’s watchmaking expertise. However, you may find yourself looking but not touching the watches on the ground floor—the watchmaker’s high-end timepieces are created in such limited quantities that only serious collectors with serious spending power will likely be the only ones to wear them on their wrists.