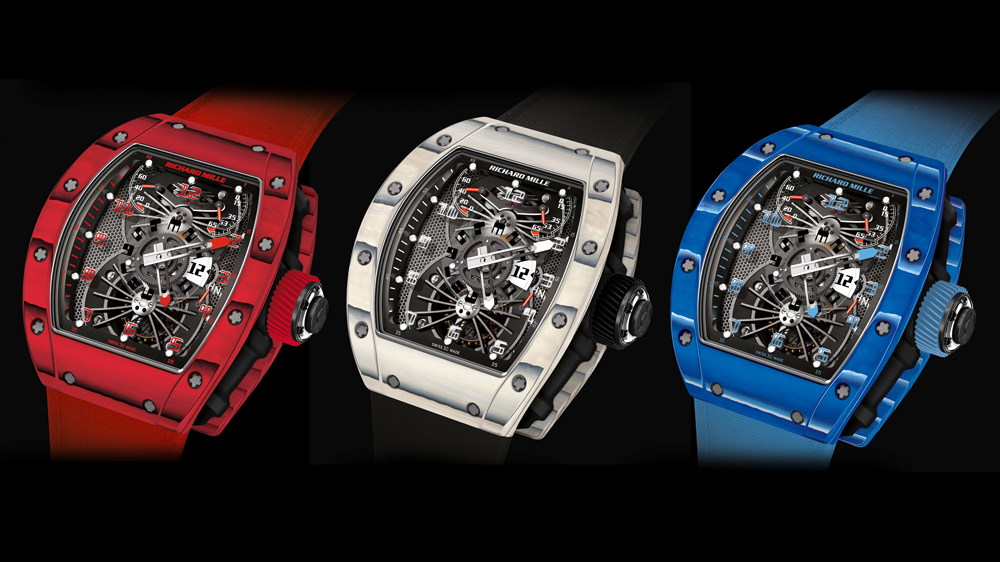 Richard Mille has released three new versions of its RM 022 Aerodyne Dual Time Zone timepiece ($528,000) in red, white, and blue that will be limited to just 10 pieces each and only be available in the Americas. When the RM 022 was first released in 2010, it was a true feat of innovation. The watch introduced radical new materials in watchmaking such as orthorhombic titanium aluminide alloy . . . got that? It’s a material typically reserved for the aerospace industry and was developed by NASA to be used on the wings of supersonic aircraft. Richard Mille incorporated the honeycomb-patterned material into its RM 022 to add strength and torsional resistance to the tourbillon. The baseplate of the timepiece, shaped like an airplane’s aerodynamic V-shaped wing, also takes its cues from aviation.

This time around, Richard Mille incorporated its TPT (Thin Ply Technology, a method for layering fibers) material into the RM 022. It was first used in the sails of racing yachts due to its lightweight durability and has since been used in aeronautics, golf, and Formula 1 racing. It was first introduced in a Richard Mille timepiece in 2013 in its RM 011 watch and was most recently used in its RM 11-03 McLaren Automatic Flyback Chronograph. The new RM 022 incorporates Quartz TPT, which creates flexibility in design through a special layering process of quartz fibers, into its front and back bezels. The case band is machined from Carbon TPT, which uses the same layering process as the quartz version but instead uses carbon fibers for ultimate durability. The white version of the RM 022 has front and back bezels that incorporate carbon fibers interspersed with quartz fibers to create a black-and-white-striped effect.

The dual time zone feature elevates the watch a step further. The center of the dial features a transparent sapphire crystal disc that only becomes legible when it rotates numerals into the three o’clock position where the black numeral is highlighted by a white background to indicate the hour in the second time zone. The time is easily adjusted via a pusher at nine o’clock.

The three versions of the 48 mm RM 022 also feature a power indicator marking 70 hours of power reserve, a torque indicator, and a function selector. It comes on a rubber strap with a titanium clasp and is available exclusively at Richard Mille boutiques in the Americas.