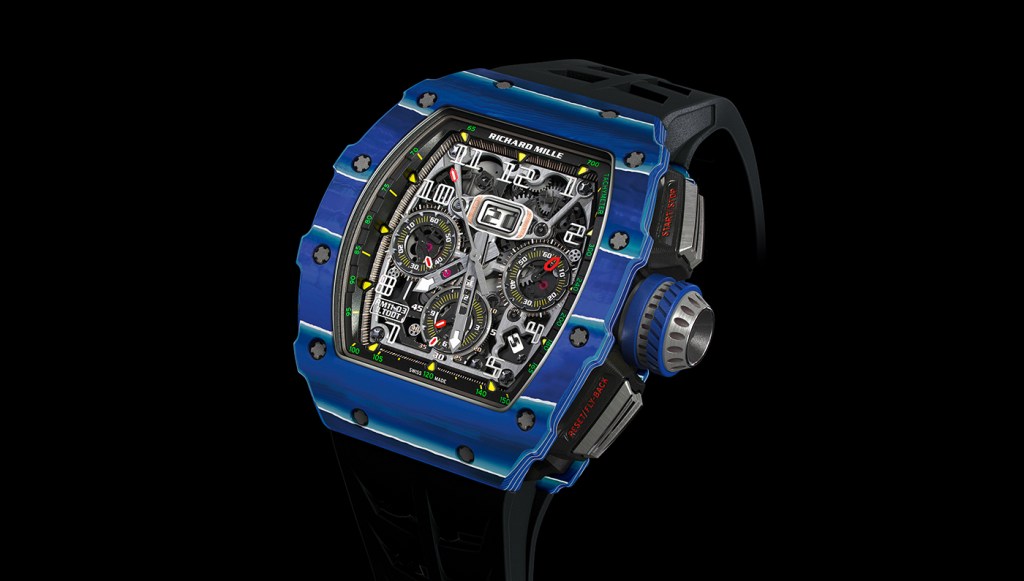 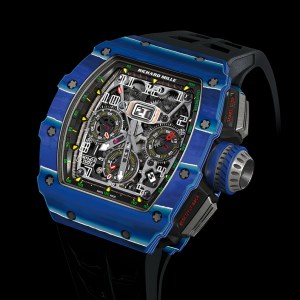 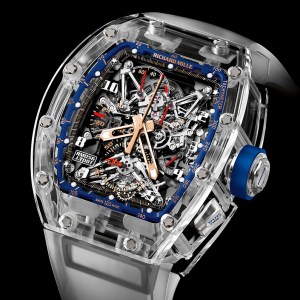 Coming on the coattails of the brand’s record-breaking, lightweight split-seconds chronograph at SIHH, Richard Mille has just announced three new limited-edition models dedicated to its eponymous founder’s longtime friend and motorsports legend Jean Todt. Both Todt and Mille share an intense passion for technical innovation in both racing and horology, and these new timepieces pay a fitting tribute to this common bond. The Jean Todt Collection—comprising new versions of the RM 11-03, RM 050, and RM 056—will be carried exclusively at Richard Mille boutiques and limited to 150, five, and three examples, respectively.

The most notable change to the RM 11-03 and RM 050 models is the use of blue and white TPT quartz, a compound consisting of quartz and carbon. The proprietary material is produced by North Thin Ply Technology, a company that Richard Mille has forged a longstanding relationship with as its primary supplier of alternative case materials. While the manufacture notes that the colors were chosen to reflect Todt’s personal favorite hues, the selection also appears to be a bit of a nod to the team colors of Peugeot’s motorsports efforts, which Todt contributed to as its director of racing. Either way, the vivid-blue textured case will be incredibly light and finally fills the gap in the Richard Mille lineup for those looking for a watch that is more attention grabbing than gold or titanium, without being as polarizing as the bright green RM 59 Yohan Blake or the traffic-light red QTPT RM 11 that launched last year.

Last but certainly not least, the RM 056 adds yet another sapphire-cased option to the brand’s growing collection, though differences between this piece and the RM 056 Tourbillon Chronograph Sapphire Felipe Massa from 2015 are quite nominal. The blue accents on the rehaut and crown were transitioned to a lighter hue, and the bright yellow details on the older piece have been subdued as well, replaced with either red or rose gold. Mind you, the new RM 056 is still a showstopper. However, when compared to the other two Todt special editions, this model seems the least different from existing pieces in the Richard Mille catalog. Pricing for all three models has yet to be announced, but the pieces are expected to arrive in Richard Mille boutiques later this year. (richardmille.com)