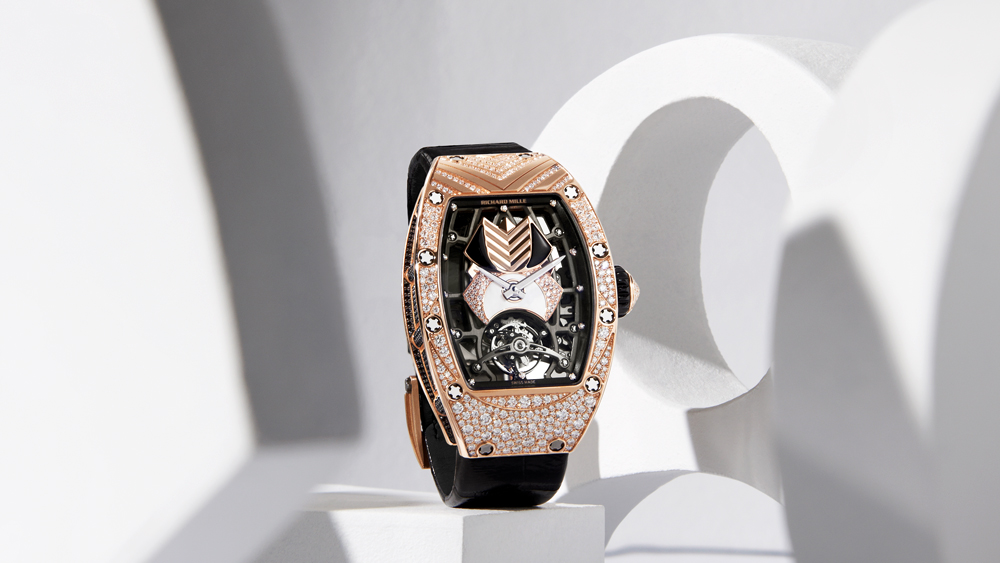 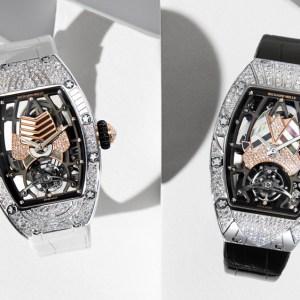 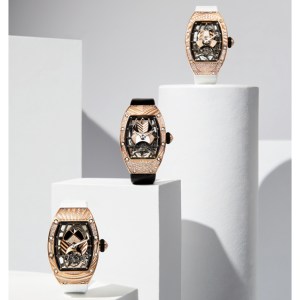 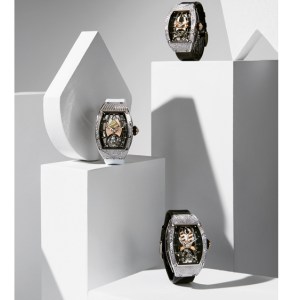 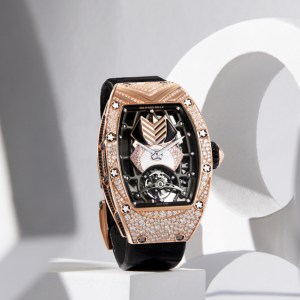 Richard Mille unveiled their new women’s RM 71-01 timepiece in Paris at the Palais de Tokyo’s swanky Monsieur Bleu restaurant overlooking the Seine. In an unusual turn for the brand, the new timepiece comes as a collection of 10 watches (400,000 CHF each excluding VAT or approximately $404,733 at current exchange) instead of one, with only five of each version available. Each feature variations on the mother-of-pearl, onyx, and diamond settings. It marks the first collection overseen from top to bottom by Richard Mille’s Cécile Guenat, the watchmaker’s director of ladies’ collections.

The highlight of this new collection is not only its unique design conceived by Guenat, but the watchmaker’s first-ever, in-house automatic tourbillon movement, the Calibre CRMT1—the brand’s 8th in-house calibre. Richard Mille’s commitment to making high-complications and in-house movements for women is a major point of interest for its discerning clientele. One female collector present at the event told us she never buys a timepiece without at least one complication. “I don’t think most watch brand’s take women seriously,” said the collector, who preferred to remain anonymous. “That’s why I keep coming back to this brand. That, and the fact that I can wear their timepieces every day because they are so lightweight and comfortable—they never end up in a winder or in my safe.” The new RM 71-01 has a thickness of 6.2 mm and a weight of just 8 grams with the Calibre CRMT1 clothed in lightweight titanium.

Guenat sat down with us at the Plaza Athenée in Paris to explain the complicated process by which the new RM 71-01 was created and why it was three years in the making.

What do you think about first when you begin designing?

‘I have to design a watch, damn.’ [Laughs] No, it depends. With this one, it was a nice story with the in-house movement, so I took the line of the movement and the shape of the original dial from the brand and I began to draw lines from those points and slowly it became what it is. But I did a lot of research and have a lot of inspiration. I’m quite inspired by Art Deco, primitive tribal art, Bauhaus and those kind of things.

The new caliber is big news for this watch. Can you tell us about it?

Yes, it was a very big step for us. It’s our first in-house automatic tourbillon movement [CRMT1]. We plan to do more and more internally, but of course we are still working with our other suppliers. We’re known as a quite male-oriented brand, but all the ladies’ movements are done in-house actually. So we’re already quite focused on our women’s timepieces. In fact our first-ever, in-house caliber [the CRMA1] was developed for our ladies’ timepiece the RM 037 and we also used and in-house caliber in the ladies’ RM 07-01. In fact, I’m so often thinking about taking the dials off because I love watching the movement. [Laughs]

Why did you decide to do 10 different versions?

I have so many inspirations, which is why we did 10 designs instead of just one. It’s the first time at Richard Mille that we did a real collection for a watch. It’s very rare in watches that you have a collection in the same way as jewelry or fashion. The shape of the dials and the settings are different. The stones are the same but all of the settings are different. It was difficult because there are actual multiple different settings of the stones on one watch. There are some polished parts as well as engraving that are very difficult not to scratch when setting the stones.

This is the first time you oversaw the entire creation of a ladies timepiece. What was the process like for you?

I was really helped along the way by the entire team. I did the design, but then I really worked closely with the team that did the movement and the team that did the case and we began working together. It was quite complicated, because I really insisted to them that I wanted to keep the volume. In the dial for example, you have the setting on top with mother-of-pearl and then you have the metal pieces underneath and it was very difficult to do. In jewelry, it would be quite typical to do this, but the people that did the setting on top typically work on watch dials so they don’t have the entire knowledge of the jewelry component so we really had to work together. There were so many discussions and meetings and I often had to say, ‘Don’t worry guys, we can do this.’ You know how it is when you are trying to teach people how to do something new when they are used to do something a certain way. Some people will react in a nice and optimistic way and others have to be pushed a bit more. But people in our manufacture are usually very, very open-minded.

You designed jewelry before prior to joining Richard Mille. Where did you get your start?

Scott Wilson, he’s an independent jewelry designer—he actually began his career as a milliner— and he created jewelry pieces for a lot of great people during the ‘90s, especially designers on the catwalk like Thierry Mugler, Hussein Chalayan, Givenchy, and Gaultier. I met him when I was studying in Geneva and I began working with him during an internship.

Your family is in watchmaking, but did you ever expect to end up in the business?

Even though my father is the co-owner of Richard Mille, I didn’t expect I would be working in the watchmaking business. Jewelry and watchmaking are not exactly the same thing, so I was quite surprised when they asked me to join the company.

Were you nervous to get into watchmaking?

Yes, but before I started to work here, I was really clear with them what I do. I told them, ‘I do jewelry and I want to show you the kind of jewelry I am making.’ I’m not exactly a classically oriented jeweler. I was trained classically, but I more fashion oriented. But they insisted they wanted me on board because they wanted something new and different. For them, it was really bold but for men the brand already has very strong ideas and innovation.

What were you surprised to learn about the process of incorporating jewelry with watchmaking?

The way people think is different. In jewelry, we think more about volume but watchmaking is more two dimensional or more flat. Even though the timepieces at Richard Mille aren’t exactly flat, it was still difficult to work on that volume.

Do you find that the watchmakers are more interested in working on women’s pieces when they have in-house complications?

I’m not saying this because I want to be corporate, but I think with every project at Richard Mille they are creating watches that are unique and exciting.

Why did you call the watch a Talisman?