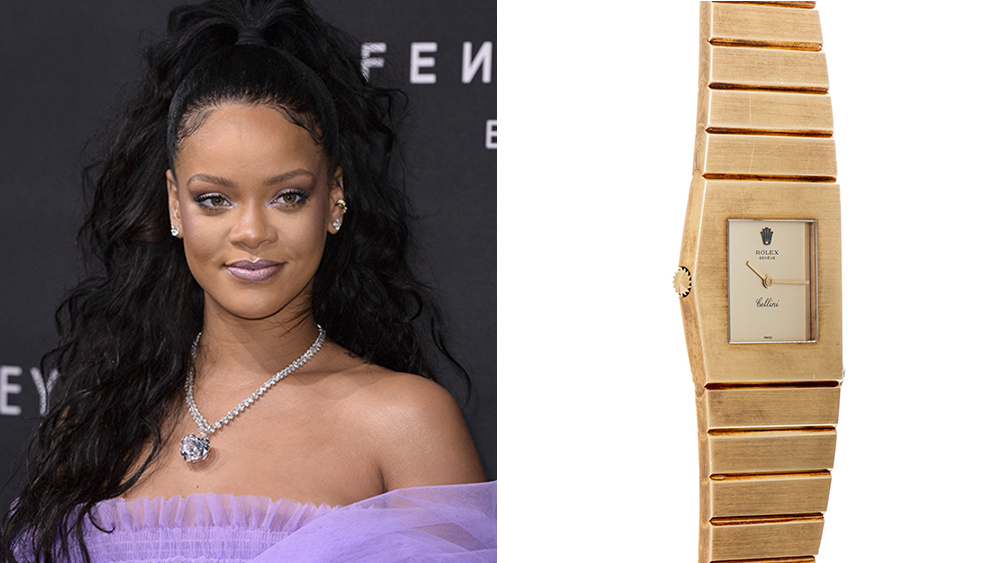 Congratulations are in order for Barbadian singer Rihanna and her boyfriend A$AP Rocky, whose recent pregnancy announcement photos earned headlines around the world. The range of street-style shots show off the mother-to-be’s baby bump, but look closely and you’ll also see her vintage Rolex King Midas watch.

Horological observers like Dimepiece believe the singer’s version was customized by Bangkok-based fine jewelry designer Patacharavipa. A sold-out listing on the company’s website describes an 18-karat yellow gold example of the watch made in 1970. And while you can’t get your hands on that watch now, Analog/Shift has a non-customized version made just a few years later.

The available 1976 model, or Ref. 4315, features a solid 18k yellow gold case with a matching flat-link integrated bracelet. It also displays an 18k gold sun crown, matching dial and a numbered case (2989). Named after the mythological Greek King Midas, the watch is 27mm (excluding the crown) and features a manual-winding in-house movement. Its case and dial are in “fantastic condition,” according to Analog/Shift, and show only light signs of wear from gentle use. It’s listed for $21,450.

The Midas series debuted in 1962 and was penned by legendary Swiss watch designer Gerald Genta, who would go on to create the iconic Audemars Piguet Royal Oak and the Patek Philippe Nautilus models in the ’70s. The shape of the Midas’s angular case was made to resemble the Greek Pantheon, or Temple of the Gods. Turning your wrist horizontally, you’ll notice the triangular temple roof and grooves that make up its columns. The original Midas editions were produced as a limited run before being added to Rolex’s Cellini line of dress watches, which launched in the ’70s. Their solid 18k gold cases and bracelets earned them 30 percent higher list prices than others in the offering.

If you don’t own a time machine, you can purchase Ref. 4315 now on the Analog/Shift website. We can’t promise you’ll look as cool as the self-proclaimed “bad gal” herself while sporting it, but you’ll surely cause a stir among fellow watch collectors.