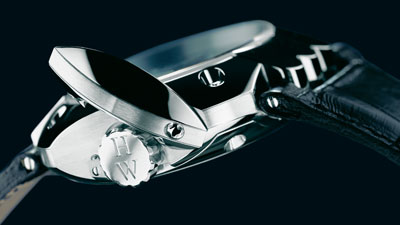 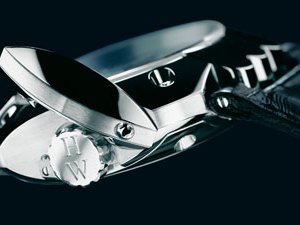 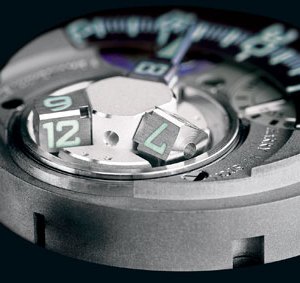 For watch fetishists whose tastes run toward the bizarre, Harry Winston’s annual Opus projects never fail to arouse. For each of the past five years, the company has enlisted an avant-garde independent Swiss watchmaker to produce a timepiece that challenges watchmaking conventions. This year’s Opus V, of which Winston will make 100 priced at $107,000 ($192,000 with diamonds), was created by 29-year-old Felix Baumgartner, a Geneva watchmaker whose penchant for oddball time displays suits Winston’s idiosyncratic oeuvre. Baumgartner has combined a retrograde minute display with rotating cubes that show the hours. The cubes, each marked with four numerals, spin around a three-spoked wheel. The cube showing the correct hour connects with a retrograde minute hand and sweeps along with it until the end of the hour, when the minute hand snaps back to pick up the next cube, which has rotated to show the following hour. A five-year service interval display on the caseback lends a dose of practicality to the watch’s whimsy. For those seeking originality, this Opus, like its predecessors, is an uncommonly reliable choice. (Click images to enlarge)