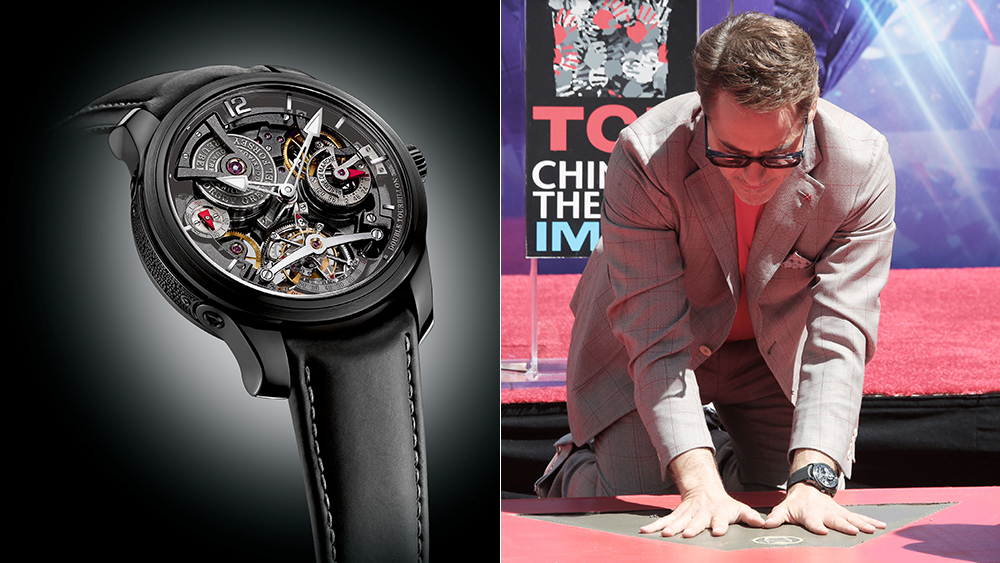 While there’s no shortage of watch collectors who safeguard their most precious timepieces in hermetically sealed vaults and never wear them publicly, Robert Downey Jr. is not among their ranks. He’s been known to wear some truly standout timepieces both in his personal life and on the red carpet. And on Tuesday evening, at an event celebrating his new film Avengers: Endgame, he put one such watch in a precarious situation that would give the rest of us serious pause.

For an imprint ceremony at Hollywood’s TCL Chinese Theater (where the stars have been leaving their handprints in wet concrete since Mary Pickford and Douglas Fairbanks left the first marks in 1927), Downey Jr. and his stylist Jeanne Yang put together an outfit comprised of a suit from Isaia, a t-shirt from Cotton Citizen and sneakers from Guissepe Zannotti. The piece de resistance? A $560,000 Double Tourbillon 30° Technique watch from Greubel Forsey.

It’s not the first time the actor has worn one of the brand’s technically complicated and highly decorated works of wearable wrist art—he wore a $605,000 GMT Tourbillon to a premiere for his film Avengers: Infinity War around this time last year—but it is the first time he’s put one in any real danger.

Because when the time came to leave his mark, Downey Jr. didn’t even take the watch off, leaving it mere inches away from potentially being encased in concrete for time immemorial.

Thank goodness it didn’t slip off his wrist: Greubel Forsey is known for making extremely limited editions of its timepieces, which easily rank among the most intricately finished (and hardest to produce) in the world, so this is one of a small handful of these watches on the planet. The Double Tourbillon 30° Technique features two tourbillons that help it boast a power reserve of 120 hours. And while it doesn’t have many complications, its interior and the finishes therein give it a lot of visual interest and depth. It would be hard not to get lost looking at its frosted nickel bridges, or watching its tourbillons whirr away the hours, minutes and seconds. For a bit of balance, its case is made from ADLC titanium (in other words, titanium coated with an amorphous diamond-like carbon), which watchmakers prize for its durability, sportiness and light weight.

Luckily, the watch is also fitted with a secure folding clasp that kept it secure on the actor’s wrist, and meant that his addition to the theater’s collection of imprints is just his hands and initials–no crown marks in sight.