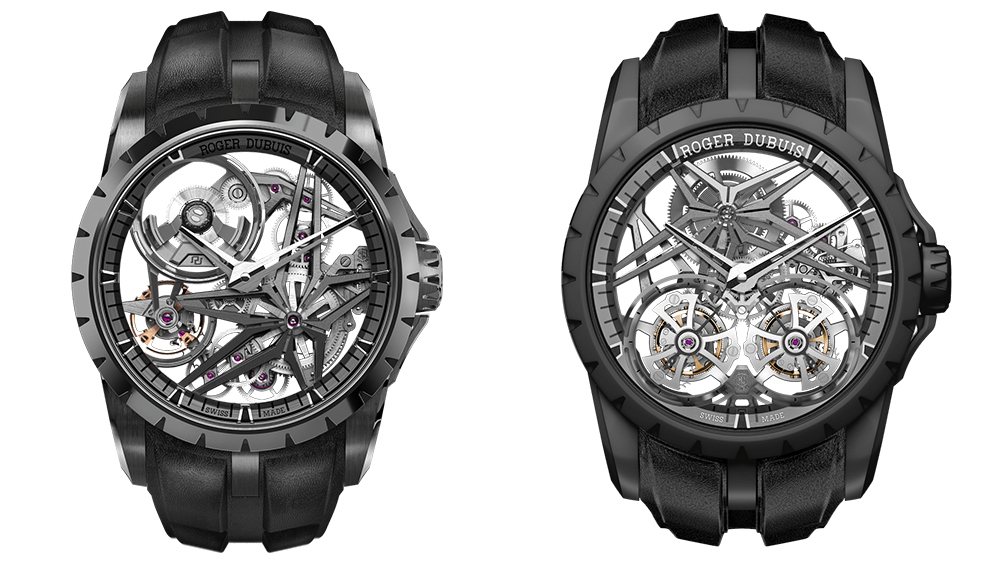 The Swiss watchmaker has added two new timepieces to the flagship collection. Launched in 2005, Excalibur was inspired by the Arthurian legend and is known for its avant-garde skeletonized movements that highlight a star motif. The sleek new additions, unveiled Wednesday, bear all the hallmarks but feature cases made entirely from black ceramic. According to Roger Dubuis, this material is four times stronger than stainless steel and ultra-resistant to scratches.

The new Excalibur Double Tourbillion and Excalibur Monobalancier models both sport unique in-house movements that offer an impressive 72-hour power reserve and striking openworked dials to showcase the intricacies within. The handcrafted beauties each come fitted with an embossed black leather strap, too. And while there are certainly similarities between the two, there are also subtle differences.

The Excalibur Double Tourbillion, for instance, comes equipped with a 45 mm case that houses two tourbillions, a gray flange, an engraved minute track and rhodium-plated hour markers to help it pop on your wrist. The five-pointed Roger Dubuis star takes pride of place at 12 o’clock, while the RD108 movement is clearly visible through the sapphire crystal caseback.

The blacked-out Excalibur Monobalancier, on the other hand, sports a slightly smaller 42 mm case and makes the micro-rotor and balance wheel the focus. The star has been reshaped to hover above the movement’s barrel, while the new caliber, RD 720SQ, has been refined for greater accuracy and precision. Roger Dubuis fans may remember this model debuted at Watches & Wonders 2022 back in March, but was finished in the watchmaker’s proprietary EON Gold (a pink-gold alloy) instead of ceramic. This particular variant could also be finished with 60 white diamonds on the case bezel for a little extra sparkle.

The Excalibur range currently comprises some 23 different variations, but few models are as slick or hardwearing as this new noir duo. As for the cost, the Roger Dubuis Excalibur Double Tourbillon Black Ceramic is limited to only 28 pieces with the price upon request, while the Excalibur Monobalancier Black Ceramic will set you back $67,500.