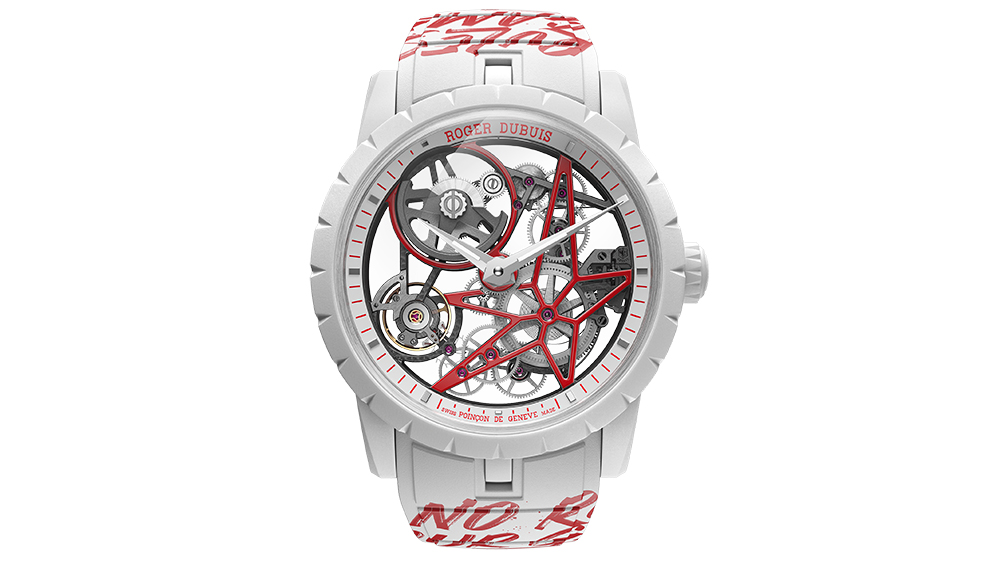 When Roger Dubuis opened it’s now-closed Midtown Manhattan location in 2015, the company debuted Hommage Millésime pocket watch at the store. But a lot can change in seven years. And the celebratory timepiece for its downtown pop-up shop in Soho looks entirely different from the more stately high-complication piece that dropped for its previous Madison Avenue location.

The new Excalibur Soho Edition MB, of which only eight will be made, showcases the brand’s efforts to appeal to a decidedly younger, more sartorially street-savvy clientele. The 42 mm watch is crafted from a milky-white mineral composite fiber and displays a skeletonized dial. Its red star-shaped bridge and minute counters create a bold contrast that sets it apart from the wide range of other horological wonders in the watchmaker’s “iconic” series that debuted in 2005. The figure’s white rubber straps also don graffiti-style writing in a red font that features the Swiss watchmaker’s mantra of “No Rules, Our Game.”

The Excalibur collection is known for its high-end complications that boast avant-garde designs—all manufactured in Geneva, of course. Knowing that, the Excalibur Soho Edition MB watch reveals itself as a suitably outlandish addition to the series. But while the watch’s design speaks to a street-style aesthetic, the inside is still pretty buttoned up. The timepiece is powered by the company’s RD820SQ self-winding movement that is certified by the Poinçon de Genève. Its one of the most acclaimed certifications in the world of haute horology. The movement provides the watch with a 60-hour power reserve and a water resistance of up to 50 meters (or 5 ATM).

Roger Dubois is not alone in heading downtown. Watch companies have been flocking to Soho. The neighborhood is home to Watches of Switzerland’s most successful Manhattan location (the multi-brand retailer also has a boutique in Hudson Yards) and even more traditional high-end watchmakers like F.P. Journe have decamped from Madison—the brand has secured a retail space on Mercer Street, although its opening date is still to be determined.

To order one of the eight Excalibur Soho Edition MB’s available (price upon request), visit Roger Dubuis online or head to the residency on 134 Wooster Street.