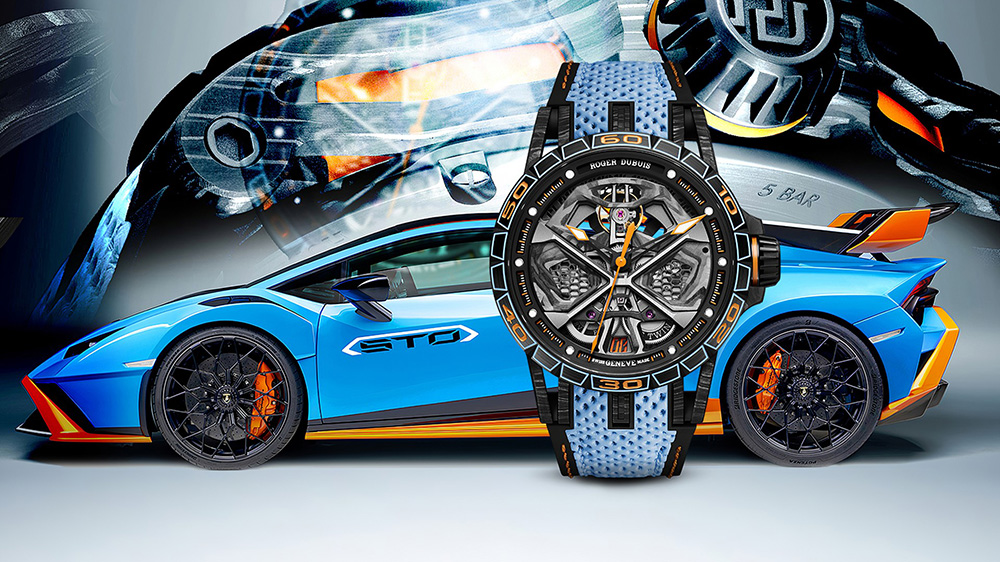 Lamborghini and Roger Dubuis are becoming quite the team. Just weeks after the Italian supercar maker debuted the new Huracán STO, it has been given the limited-edition watch treatment.

Late last week, the Swiss watchmaker revealed a new hyperwatch based on the high-performance variant that, by the way, is heavily rumored to be the final Huracán. And like its muse, the timepiece offers a bold design that’s matched by high-performance mechanical components.

The first thing you’ll notice about the Excalibur Spider Huracán STO is its striking colorway. The watch’s dial, bezel and strap all include traces of Blue Laufey and California Orange, both of which feature prominently in the STO’s racing-inspired livery. The piece features a 45mm skeletonized carbon case with rubber inlays topped with a titanium bezel and metallicized sapphire crystal. The new strap, meanwhile, consists of perforated calfskin leather over a rubber interior liner.

The watch’s interior workings are just as eye-catching. It’s powered by an automatic RD630 calibre with a honeycomb motif, designed specifically for use in Roger Dubuis’s Lamborghini watches. Described by the watchmaker as a “mean machine,” this signature movement features a 12-degree angled balance wheel with a 360-degree oscillating weight that reproduces the same speed effect as the STO’s wheel. It’s topped with an upper calibre a strut-bar bridge that looks almost identical to those found on the Huracán’s V10 engine. The watch also has a power reserve of 60 hours.

If all that sounds a bit over the top, just consider the vehicle the watch is based on. The STO is road-homologated supercar inspired by Lamborghini Squadra Corse’s one-make Huracán Super Trofeo EVO race series. It features a naturally aspirated V-10 capable of churning out 640 horses and 417 ft lbs of twist at 6,500 rpm. If it does in fact turn out to be the final Huracán, it’s not a bad way to say goodbye.

The Excalibur Spider Huracán STO will be limited to just 88 examples and will retail for $56,500. That price may cause some to pause, but think of it this way: That’s only a fraction of its inspiration’s starting price: $327,838.