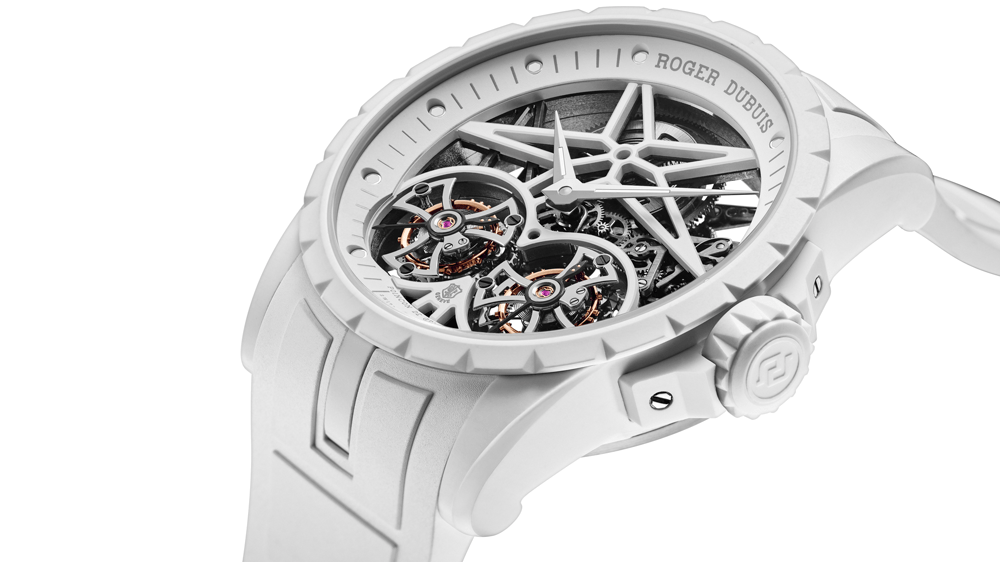 Swiss watchmakers have spent the better part of the past two decades experimenting with materials that borrow heavily from the automotive, medical and aerospace industries. As a result, watches boasting never-before-seen metallurgical combinations, silicon-enhanced movements and cases made of glossy high-tech ceramic are practically de riguer.

With its new Excalibur Twofold model—limited to just eight pieces—Roger Dubuis is upping the ante. The timepiece, which riffs on the brand’s signature skeletonized double flying tourbillon, features not one, not two, but three world premieres that lend the timepiece two personalities. By day, the Excalibur Twofold is a contemporary, sci-fi-looking white wristwatch with a bold, openworked face; at night, it transforms into an electric—and enigmatic—space invader.

For starters, the model’s bezel and 45 mm case are crafted out of Mineral Composite Fiber (MCF), an ultra-white composite material made of 99.95 percent silica custom developed by Roger Dubuis.

In another world first, the brand’s watchmakers have applied a patented process to the the angles of the caliber of the upper plate of the movement to make them luminescent at night.

The glow doesn’t end there. The strap of the Excalibur Twofold is made of fluorocarbon rubber—known as “LumiSuperBiwiNova”—that’s equally luminescent.

“The Excalibur Twofold is a perfect example of our conception of art technologies and innovation,” says Roger Dubuis CEO Nicola Andreatta. “Focusing on that innovation, three world premieres were introduced with this incredible timepiece: a new ultra-white composite material, luminescent angles on the caliber and luminescent rubber on the strap. We exploited them as artistic features to showcase, once again, the most exciting way to experience haute horlogerie.”

In addition to its unconventional material choices, the model is equipped with the RD01SQ movement, which is backed by the prestigious Poinçon de Genève, a quality mark that applies to 100% of the Geneva-based manufacturer’s movements. (Note: Even the quality seal glows in the dark!)

The piece, which was due to be unveiled later this month at the now-cancelled Watches & Wonders Geneva, retails for $276,000.