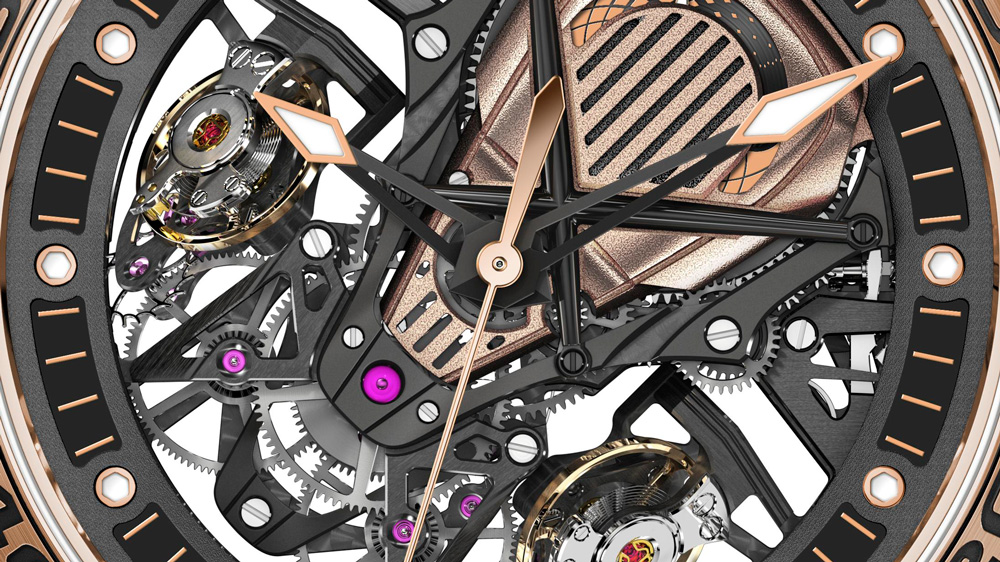 In early 2017, Roger Dubuis released the Excalibur Spider Pirelli Double Flying Tourbillon ($277,750) and Automatic Skeleton ($66,500). Both watches were built around excellent calibres from the brand’s existing portfolio but used new combinations of colors and case materials. The most notable novelties were the straps, which incorporated rubber inlays made from Pirelli tires taken from actual race winners.

The watches are extremely sporty, and the Pirelli tire is a firm fit with the overall aesthetic. The Double Flying Tourbillon has so far only been produced with blue accents (Pirelli’s official color apparently) and limited to eight pieces. Three versions of the Automatic Skeleton were made in red, blue, and yellow, with each limited to 88 pieces. However, this month, Roger Dubuis has added a fourth edition with white accents, also limited to 88 pieces.

With the tires taken care of, what about the car?

Back in September, we shared the news that Roger Dubuis was to be the 2018 partner of Lamborghini’s Squadra Corse team, a collaboration that also yielded two new limited-edition Excalibur Aventador S variations—one in yellow ($185,000) and one in orange ($205,000).

This month, Roger Dubuis has introduced a new 28-piece edition of the Excalibur Aventador S. Its case features layered carbon, black rubber, and black DLC titanium—a combination that has become a signature for the brand—but on the new edition, the bezel is fluted pink gold with black markings. The dial reveals further pink-gold accents on the hands, the markers, and the cover plate of the barrel.

The star of the show is undoubtedly the caliber RD103SQ, a high-tech skeletonized framework coated with an anthracite-gray NAC treatment and finished with a mix of shotblasting and perlage. It’s particularly impressive to note that the caliber is Poinçon de Genève–certified—something far more common with traditionally designed and finished calibers. The RD103SQ’s aesthetic draws inspiration from the engine of the Aventador S, particularly the crossbars embracing the mainspring barrels, which expertly mirror the carbon-engine-bracing crossbars of the Aventador.

Oscillating from within the skeletonized movement are two inclined 4-Hz balance wheels. They are both powered by the same mainspring via a differential gear. The resulting movement is perhaps even more complex than a tourbillon but just as capable of enhanced accuracy. First, the differential is such that the rates of each balance compensate for one another—meaning that an accumulated error in one has less of an impact on the entire system thanks to the optimal performance of the other. Second, the tilted position of the wheels means that they will never experience the same gravitational impact as the other at the same time. Combined with the differential, this means the watch is less likely to result in a notable rate variation if held in a single position for a prolonged time.

Another excellent design is the reserve indicator, which is impressively sandwiched between the barrel and its cover plate. The complication is quite easy to overlook unless you are specifically seeking it, which is actually a good thing when designing a secondary indicator that is not designed to be read with every glance of the watch.

When the Excalibur Aventador S is unwound, you would be forgiven for not noticing the final complication. The only giveaway is the tiny pallet fork and blade spring on the reverse of the movement at the central pinion. This is a dead-seconds mechanism, which adds tiny jumps to the seconds hand as it makes its rounds.

In all, Roger Dubuis has been demonstrating more than just a cosmetic or aesthetic commitment to its sporty and aggressive automotive partners. Indeed, the brand has been combining new materials, creating new movements, and providing some of the most exotic plates that the Geneva Seal has ever emblazoned. Needless to say, we can’t wait to see what Roger Dubuis has in store for us at SIHH.