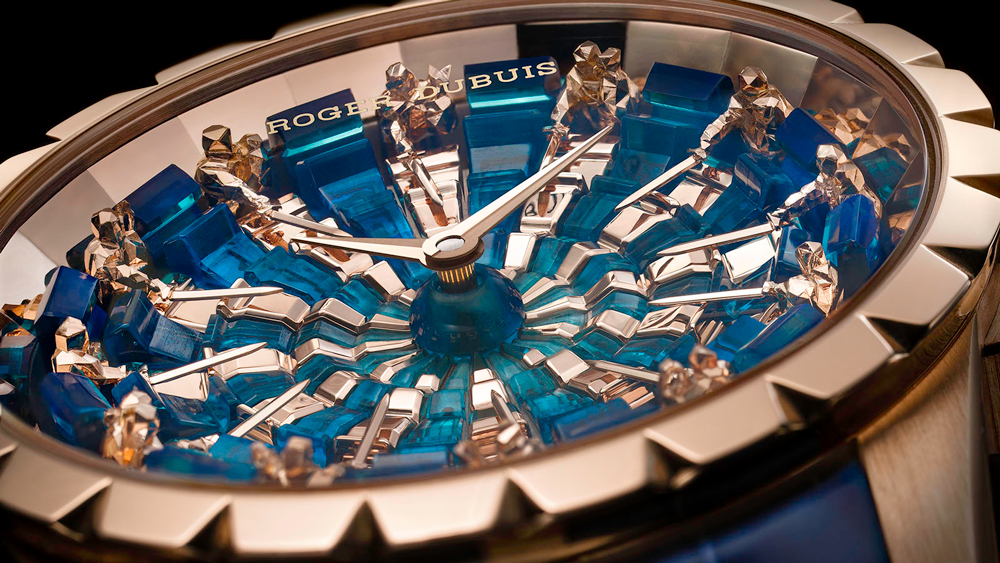 Everyone knows the legendary tale of King Arthur and his magic Excalibur sword that he pulled from a stone, thereby anointing him as the future king of England.  Joining him on his tireless quest to defend the kingdom were 12 loyal knights who took an oath of allegiance—all meeting regularly at the famed Round Table. Swiss watch brand Roger Dubuis is continuing to pay homage to the ancient legend with its third Excalibur Knights of the Round Table watch.

The brand unveiled its first version in 2013 with a dial fashioned after the Winchester Round Table (which dates to the mid-13th century and today hangs in the great hall of Winchester Castle in Hampshire, England). The second model followed in 2015 with a dozen sculpted bronze knights gathered around a black jade dial—in other words, a round table. The Knights of the Round Table III tops them all thanks to its cutting-edge, three-dimensional dial. The dial’s round table is created in tiers, with the center being the deepest point and the levels graduating upward. It is created using 12 translucent blue enamel segments, each consisting of solid blocks of enamel, and 12 rose-gold segments.

At the top of each gold section sits a knight in shining gold armor, his sword pointed to the center, pledging allegiance to the king. Each one of the 12 knights that serve as hour markers is created using a sophisticated poly-sculpting technique originally created for the gaming industry to build 3-D models and scenes. In the case of this watch, Roger Dubuis used the technique to create three-dimensional 18-karat pink-gold knights, each of which is individually engraved and hand-finished by the brand’s master artisans. The knights measure just about 6.5 mm in height. Each dial takes approximately 45 hours to create and assemble.

The 47 mm Excalibur watch is powered by the 172-part self-winding RD821 automatic movement that offers 48 hours of power reserve. Just 28 pieces will be made, each retailing for $280,200.