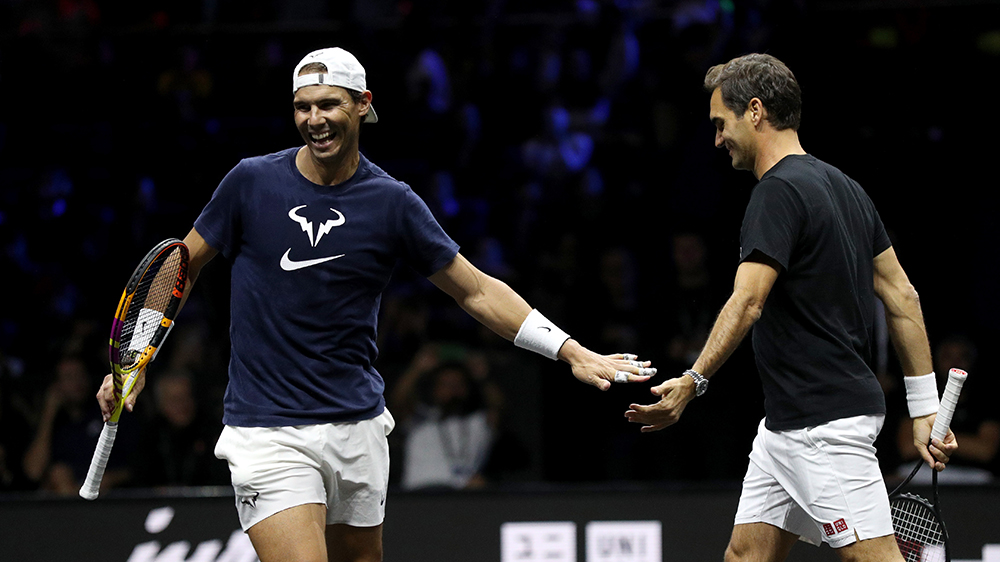 Most of us wouldn’t dream of wearing our best watch on the tennis court, even for a casual rally with friends. Roger Federer and Rafael Nadal don’t think twice about it.

For proof of this, just look at the timepieces the two wore this week while practicing to play doubles together before Federer’s final professional match. The Swiss legend was wearing a Rolex, while the Spaniard rocked one of his Richard Mille signature models.

The watch that really caught our eye was the one on Federer’s wrist. That’s because he was wearing the brand-new Oyster Perpetual GMT-Master II with a green and black monobloc Cerachrom bezel (collectors have already taken to calling the combination the “Sprite”). Like all GMT-Master IIs it’s striking, but what is so special about this model is that its crown and crown guard are positioned on the left of its Oystersteel case, making it much more comfortable for southpaws.

It may seem weird that Federer is wearing a left-handed model since he is a righty, but, as GQ points out, the position of the crown points away from his hand ensuring that it won’t dig into his wrist on a huge swing. The $11,500 watch isn’t easy to find, but Federer has worked with Rolex for most of his 24-year-career, so we imagine he had an in.

Nadal, who has won 22 grand slams during his still-active career, was also wearing an eye-catching timepiece at practice. He actually is a lefty and on his wrist was the latest version of the RM 27-04. The $1 million watch has a suspension mechanism made from a single steel cable woven through its case, giving it the appearance of a tennis racket.

Of course, Nadal is no stranger to wearing a valuable timepiece on the court. He’s been wearing his Richard Milles during tournaments for years now. Federer is another story, usually opting for traditional wristbands during matches. Trophy presentations and other extravaganzas are another story, though.