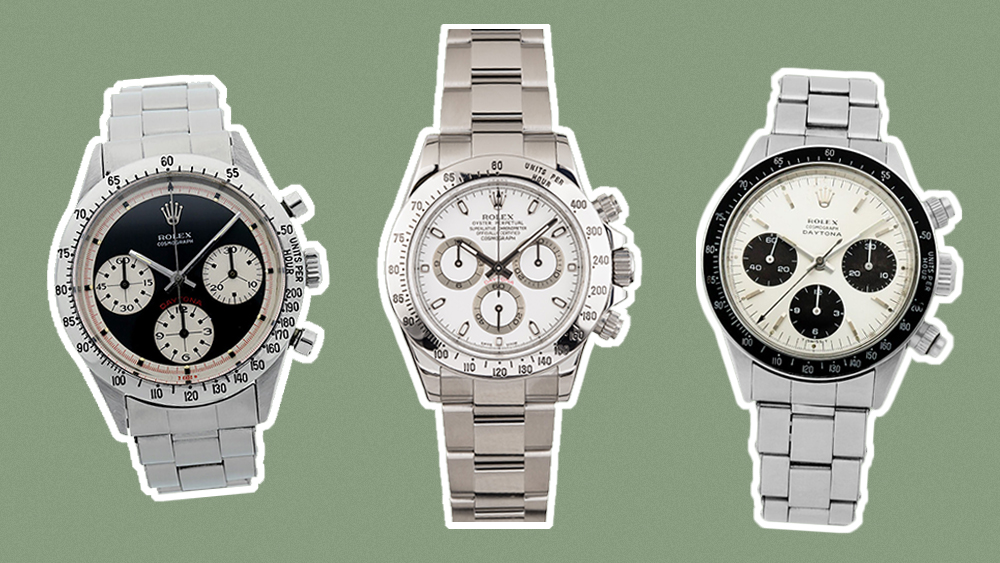 Yup, that’s right—and all the more so with those beloved “Paul Newman” models, the ones with the funky typeface and red accents that tend to make headlines these days. Those things languished in shop windows for years.

The model is now the object of desire to everyone from horological newbies to dedicated collectors. Paul Newman’s own “Paul Newman” Daytona famously fetched nearly $18 million at auction in 2017. So, how is it that this humble (originally hand-wound) chronograph came to be so beloved the world over?

Let’s take a trip back in time, shall we…

Rolex, of course, had been making chronographs for decades before it came up with the Daytona (which was originally signed simply “Cosmograph,” minus the “Daytona” moniker). During WWII, the company housed triple-register chronographs in Oyster cases, while in the 1950s, it began experimenting with watches that clearly foreshadowed the Daytona with similar design language. Reference 6234 has more of that wartime look but by the time the ref. 6238 rolls around in 1962—the so-called “pre-Daytona”—it’s clear to see where the world’s most famous chronograph got its start.

Housed in a 36 mm stainless steel or yellow gold case and available with a silver, black or dark gray dial, the 6238 featured baton hands, faceted, applied hour markers, luminous hour plots, and unthreaded pump pushers. Powered by the hand-wound Valjoux 72 movement and available on steel Rolex bracelets, it was a sporty, handsome chronograph that needed very little tweaking before it took on the form that’s come to command such enormous sums at auction.

That same year, Rolex became the official timing partner of the speedway in Daytona, Florida. This partnership would lead to the eponymous watch we all know and love.

The Daytona was originally a mechanical chronograph—powered by the Valjoux cal. 72 or a variant thereof, it needed to be wound each day. This era lasted from 1963 until 1987—in 1988, Rolex unveiled the first automatic model.

The OG Daytona launched in 1963, with the ref. 6239, which was the very first “official” Daytona model. Housed in a (roughly) 37 mm steel or gold case, it featured “Rolex Comosgraph” on the black or white dial under the 12 o’clock logo and was powered, like the ref. 6238 “pre-Daytona,” by the hand-wound Valjoux 72 movement (later customized by Rolex and renamed or the Cal. 722). It also featured, like that model, unthreaded pump pushers, meaning water resistance was limited. Now here’s the kicker: The ref. 6239 in its pre-1965 styling did not feature “Daytona” on the dial at all; later versions did, either above the 6 o’clock subdial or beneath the “Rolex Cosmograph” marking at 12 o’clock. Also, note the stick hands and markers and the lack of a contrasting background against the outer minute and ⅕th-second track, as well as the bezel inscribed with a tachymeter scale (a first for Rolex).

The birth of the “Paul Newman” Daytona also coincides with that of the ref. 6239. (A “Newman” can be one of several Daytona references, as it’s indicative of a particular dial type, not a case type.) Called “exotic dials” by Rolex, these special dials were made by Singer and featured red “Daytona” text (though not on the earliest iterations) and Art Deco-esque Arabic indices on the sub-registers with dot markers. (It’s said that roughly one in 20 hand-wound Daytonas featured an exotic dial.) They also featured a contrasting seconds track with red markings on the outer edge of the dial. Available in steel or gold cases, these models originally didn’t sell well and languished on shelves.

Paul Newman was known to have worn one of these exotic-dialed watches, which was given to him by his wife Joan Woodward. At some point in the 1980s, Italian collectors began associating the exotic dials with the famed American actor, giving rise to the term “Paul Newman dial.” Of course, when Newman’s own “Newman” came up for sale in 2017, its nearly $18M hammer price was due in no small part to the fact that this was the very watch that gave rise to an industry-wide obsession.

1965’s Ref. 6240 was a big deal in that it was the first Daytona model to feature screw-down pushers, thus rendering it highly water-resistant. Housed in a 37.5 mm steel case and available with a black, white or silvered dial, it was powered by the Valjoux 722 hand-wound movement and went through several evolutions: While standard variants feature “Daytona” under “Cosmograph,” a rarer version, called a “Solo” dial, sees only the Rolex signature without “Oyster Cosmograph.” Each version featured an engraved, black acrylic tachymeter bezel, while “Paul Newman” variants featured the same dial as a ref. 6239 “Newman,” or featured “Daytona” under “Cosmograph.” Only roughly 1,700 pieces of the ref. 6240 are thought to have been made.

Beginning in roughly 1965 or 1966, Rolex began production of another pump pusher-equipped reference, the 6241. Measuring 37.5 mm in steel or gold and featuring an acrylic bezel, it was powered by the hand-wound Valjoux 727 and was available with either a standard or “Newman” dial in black or white. Roughly 3,000 pieces were produced during its production run, which lasted until around 1969.

Once again, in 1963 Rolex chose screw-down pushers for its new Daytona reference, the 6263. This is a nuanced model, full of small variants: Housed in a 37.5 mm case and powered by the Valjoux cal. 727—certain examples were chronometer-certified, which began in the 1970s—it came in either a steel or gold case (only 2,000 or so pieces were made in gold) in either a standard or “Newman” dial. (The “Newman” dials, however, lacked the red “Cosmograph” text of other “Newmans.”) “Daytona” text appeared either under “Cosmograph,” above the 6 o’clock subdial, or not at all on the standard dial variants. Each watch was also equipped with an acrylic bezel. Interestingly, this reference was in production until 1987, a year before Rolex began outfitting the Daytona with automatic Zenith-made movements.

This reference was fairly similar to the 6263—we still have a stainless steel or gold case, this time at roughly 37mm, and still have the hand-wound Valjoux 727 movement and the screw-down pushers. However, the 6265 featured a stainless steel or gold tachymeter bezel with black indices. A special version of the standard (non-”Newman”) dial is called the “Big Red,” and features “Daytona” in red text above the 6 o’clock subdial. Interestingly, many “Newman” dials do not feature “Daytona” above 6 o’clock. The 6265 was also in production until 1987.

This highly rare, pump pusher-equipped reference was made for a very short time in 1970 to 1971. Housed in a steel or gold 37 mm case and powered by the Valjoux cal. 727, the Ref. 6262 was offered with either a standard or “Newman” dial in black or white. Certain casebacks are (correctly) inscribed “6239” meaning that the company was using older cases to produce the 6262.

This reference is notable for its limited production (roughly three years in the early ‘70s) and for being the last pump pusher-equipped model. Its 37mm case came in either steel (roughly 1,700 examples) or gold, and it was powered once again by the Valjoux cal. 727. It featured a black acrylic tachymeter scale which, when combined with the pump pushers, made the 6264 the first (and last) reference to feature this combination. Both standard and “Newman” dials were on offer, with the “Newmans” featuring either color-coordinated seconds-track markings or red ones.

In 1988, Rolex switched began using the Zenith-produced El Primero automatic movement, which is famous for having been one of the first automatic chronograph calibers upon its release in 1969. Originally a hi-beat movement, Rolex dubbed this El Primero variant the Caliber 4040, certified it as a chronometer and slowed down the beat rate to 28,800 vph from 36,600 vph in an effort to increase power reserve and lengthen service intervals. The watch’s case size also increased to 40 mm, which is where it remains today. These “Zenith” Daytonas are highly sought after by collectors.

Production on this first El Primero-equipped reference lasted from 1988-2000. Featuring a 40 mm stainless steel case, it featured either a white or black dial, a steel bezel, screw-down pushers, and, for the first time, sapphire crystal. (There were three different bezels and five different dial variations during the watch’s production run.)

These are essentially ref. 16520s in precious metals: the Ref. 16523 came in two-tone gold and steel, while the Ref. 16528 came in solid gold. Dials were back, white or gold, while some were equipped with diamond indices. “Daytona” is found in red above the 6 o’clock sub-dial.

In 2000, Rolex released the first Daytona with an in-house, Rolex-produced movement, the Cal. 4130. Automatic and featuring column wheel actuators, it featured an increased power reserve of 72 hours, and the brand subtly upgraded it as new technology became available. Due to the movement’s design, the Daytona’s running seconds moved from 9 o’clock to 6 o’clock, while the dial also changed somewhat—if you look carefully, you’ll see that these newer Daytona models feature wider, arrow-shaped indices filled amply with lume.

Produced from 2000 to 2016, the ref. 116520 is aesthetically similar to the previous generation of Zenith Daytonas—the reference number simply adds a “1”—but features an in-house Rolex movement. This stainless steel model featured a case diameter of 40 mm, was available in a black or white dial, and had a fixed steel bezel with a tachymeter scale. Sapphire crystal, 100m of water resistance and an Oyster bracelet rounded out the package.

This is the current-production “Oystersteel” Daytona. Introduced in 2016, it features all the fixins—a 40 mm case with screw-down pushers, an Oyster bracelet with a folding Oysterlock safety clasp and Easylink comfort extension, the in-house Cal. 4130, and, most notably, a Cerachrom ceramic bezel with an engraved tachymeter scale. As usual, it’s available in black or white.

The current-production Daytona is available in more varieties than one can safely shake a stick at. It comes in several iterations of solid gold, two-tone, platinum, and even comes with a rubber strap in place of the typical Oyster bracelet. On top of this, there are special, limited-production dials with precious gems-studded bezels, wild dials, and more. At this point, the sky is sort of the limit for Rolex’s most in-demand model!