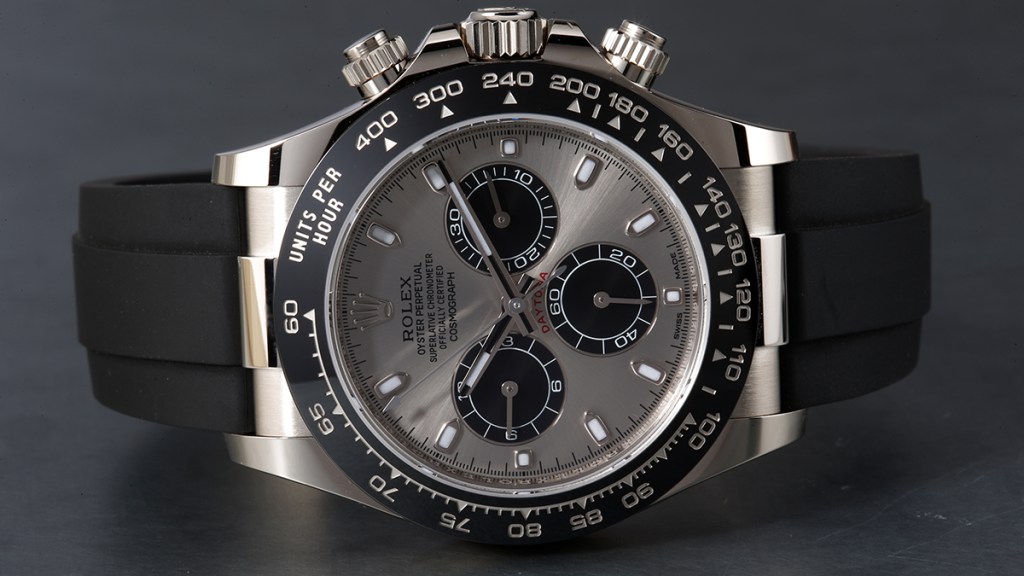 The Rolex Daytona—either modern or vintage—needs little in the way of introduction. Since gaining traction amongst collectors and enthusiasts in the late ‘60s and early ‘70s, the Daytona has cemented itself as an icon of the industry. Indeed, there’s little surprise it was chosen by Phillips’ Paul Boutros in our One Watch to Rule Them All feature earlier this month.

A reliability record beyond bulletproof, high-caliber finishing, and instantly recognizable design are the hallmarks of the Daytona. And last year’s addition of a ceramic bezel pushed the self-winding chronograph onto the want list of even more watch collectors, both big and small. 2017 saw the addition of precious metals to the ceramic bandwagon, as well as the introduction of Oysterflex—touted as the market’s best rubber strap (Rolex still calls it a bracelet). But how good is it? We aimed to find out.

Of the 37 current iterations of the latest Cosmograph Daytona, this radially brushed steel grey dial cased in white gold is one of the more understated and elegant executions available. A highly polished case and the reflective nature of its ceramic Cerachrom bezel catch light easily, ensuring the Daytona does not go unnoticed when it isn’t tucked under a cuff. The Oysterflex bracelet’s matte finish, on the other hand, gives the piece a much more subdued aesthetic when compared to those on traditional metal bracelets.

The Rolex 4130 self-winding caliber remains effectively untouched since its launch in 2000, operating under the mantra of if it isn’t broke, don’t fix it. The robust in-house manufacture caliber was engineered as a bulletproof piece of watchmaking, comprised of fewer parts than its predecessor—all while increasing its running efficiency (and boosting its power reserve up to 72h.

What’s new this year is, of course, the addition of Rolex’s Oysterflex bracelet—first seen on the Yachtmaster in 2015. Appearing to some, perhaps, be just another rubber strap, in proper Rolex fashion there’s much more lurking beneath. To combat the issues of a strap losing its shape over time, the elastomer bracelet is formed over top of flexible metal blades that assist in maintaining its shape.

On the underside of the strap, a pair of “wings” provide a buffer between your wrist and the remainder of the strap. That design helps avoid the uncomfortable, sweaty feeling that comes with wearing a rubber strap in warm weather. Essentially, Rolex engineers asked themselves what the core issues with rubber straps usually are, and solved them all in one fell swoop. It’s safe to say the Oysterflex Daytona is one of the most comfortable watches we’ve tried on in quite some time.

Once again we find ourselves with a master of versatility—an excellent “Monday to Friday” watch. A white gold Daytona can be dressed up, dressed down, worn to the beach, to the office, and just about anywhere else. It will match nicely with any of our seven favorite summer essentials, or even Josh Peskowitz’ go-to weekend outfits.  That said, the Daytona is slim and dressy enough to not seem gauche when paired with suiting.

As with the steel version of the ceramic bezel Daytona, these new Oysterflex models are expected to be in high demand. According to Rolex, deliveries of the white, yellow, and Everose gold Daytona Oysterflex models to retailers across the country have just begun, with a retail price of $28,800.