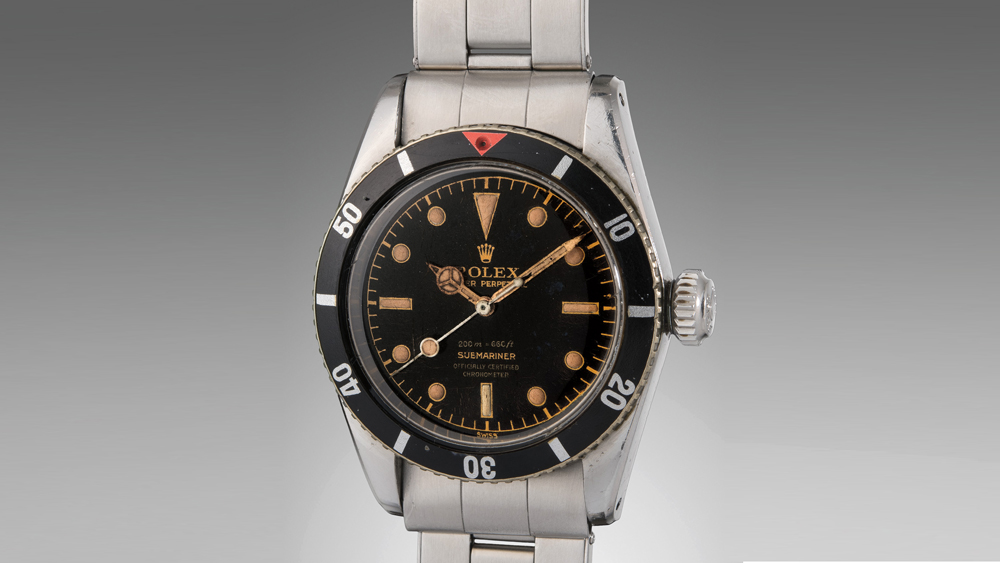 Another Rolex took home the top lot at a Phillips auction. At last night’s “Styled. Timeless Watches & How to Wear Them”, the auction house’s second New York watch auction, a 1957 Rolex “James Bond” Submariner Ref. 6538 sold for $567,000. While Rolex Daytonas have been the hot item at auction for the last couple of years, Submariners have been holding their own in the secondary market. This particular Rolex model has been commanding top dollar prices at auction thanks to its legendary appearance on Sean Connery’s wrist as James Bond in Dr. No, From Russia with Love, and Goldfinger. In June, Christie’s sold a Rolex “James Bond” Submariner Ref. 6538 for over $1 million (its ultra-rare Explorer dial drove the price to seven figures).

Phillips’s watch is considered by the auction house to be one of the best preserved early examples of the Ref. 6538, which was first launched just three years prior to this model in 1955. It’s a highly sought after timepiece not only because of its part of Hollywood history, but also because the model was only in production for four short years. It’s distinctive for its black lacquer “Swiss”-signed dial, lack of crown guards, and 8 mm crown—it is also sometimes referred to as the “Big Crown” Rolex.

Phillips has had multiple blockbusters in the last couple of years, from the sale of Paul Newman’s Rolex Daytona to Elvis Presley’s Omega. This is due predominately to a booming market thanks to hype created by the internet and social media, with more people than ever before getting interested in the niche world of watch collecting. So how fast has the market changed? Phillips sold Elvis Presley’s Omega this year for $1.8 million. Just 13 years ago in 2005, Omega purchased one of its watches worn by JFK for its archives for just $350,000 at auction.

Credit must also be given to auctioneer and watch specialist Aurel Bacs, who heads up Phillips specialized watch department Phillips in Association with Bacs & Russo. With his charisma, charm, and incredible knowledge, Bacs commands the auction floor from his podium like a conductor leading a symphony—except the noise in this case is the shouting from the sales floor, the ringing of phones, and assistants shouting out bids from the latest online bidders. With a sweeping arm and a knock of the gavel, Bacs closes out the crescendo of each big sale with a knowing smile. Bacs seems to know all the players in the room and sometimes even on the phone guiding them with the utmost ease towards each ever increasing bid. He knows what he’s doing and he’s orchestrating it all with persuasive charm. This is the man, after all, that sold the world’s most expensive watch, Paul Newman’s Rolex Daytona, for over $17 million.

This year Phillips’s watch division took in $110 million, with this particular auction raking in $11.5 million. Not too shabby. Nevertheless, a year later and everyone is still talking about the Paul Newman. A group of watch industry insiders gathered at another watch event last night, around the corner from the auction, and the conversation around Phillips quickly turned, once again, to the world’s most famous Rolex Daytona and the palpable energy created by Bacs and his bidders.