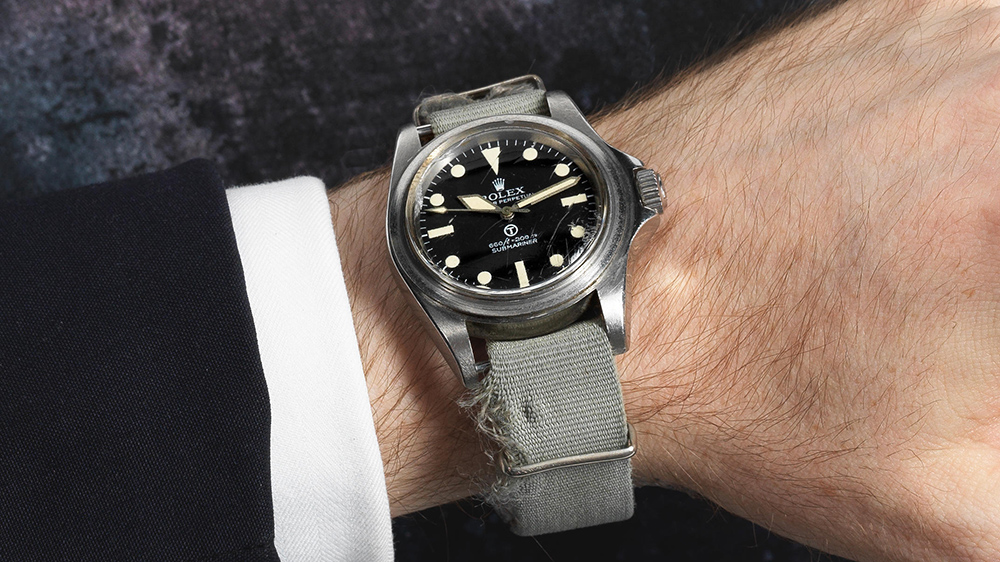 The 38 mm stainless steel timepiece, which will go under the gavel at Bonhams London on June 15, is one of the Swiss watchmaker’s most coveted models thanks to its provenance and low production numbers.

The Military Submariner, or MilSub for short, was custom-made for the UK’s Ministry of Defense in the ‘70s, whose diving units needed a robust and reliable timepiece. It is believed as few as 1,200 dive watches were given to Royal Navy personnel as part of their standard-issue equipment between ’71 and ’79. Of that lot, it is estimated that only between 120 to 180 still exist today.

This MilSub’s bezel was lost during a dive in the ’90s.  Bonhams

This particular example (Ref. 5513/5517) was issued to a former Royal Navy diver in 1977. The current owner, a Scottish diver, bought it from its original owner in the early 1980s. The second owner, who wishes to remain anonymous, wore the government-issue Rolex up until the bezel fell off in a dive in the ‘90s. It was then stored in a chest of drawers for decades until the Perthshire local took the piece to antique dealer Nick Brewster in Crieff.

“When I first saw it in its small Tupperware box, I knew it was a Submariner and therefore considerably better than my Oysterdate Precision,” Brewster told Robb Report via email.

After a bit of research and Googling, Brewster confirmed it was indeed one of the rarest and most collectible watches on the market today.

The military numbers on the back of this particular watch refer to it being issued in 1977.  Bonhams

The MilSub sports a tritium “T” on the dial, sword-shaped hands, fixed lug bars, a nylon strap, a non-reflective case and special military engravings on the caseback that distinguish it from other Subs.

Although this example is missing the 60-minute bezel, the auction house expects it will hammer for between $96,000 (£80,000 at current exchange) and $145,000 (around £120,000) at Wednesday’s Fine Watches sale. Penny Andrews, head of watches at Bonhams London, told Robb Report that the watch has great provenance “and a tale or two to tell.”

“Once it has sold, it will have been a lovely experience finding something that ostensibly was of low value and taking it to sale to achieve a life-changing amount for the owner” Brewster adds.