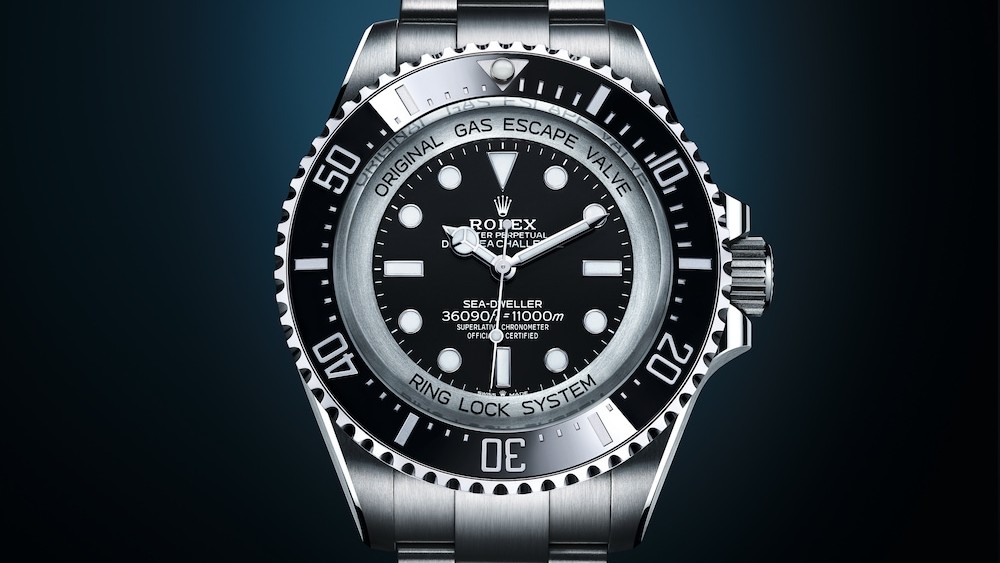 Rolex is no stranger to producing superior dive watches that push the limits of deep-sea exploration. The brand’s work in the area of water resistance began in 1926 with the debut of the Oyster case and expanded with the introduction of its signature dive watch, the Submariner, in 1953. Since then, Rolex has continued to build its dive watch collection with the Sea-Dweller and later the Deepsea, offering more impressive capabilities with each evolution. Today the brand takes its work in the realm of water resistance to new depths with its first watch constructed entirely of titanium and offering record-breaking water resistance up to 11,000 meters. This is the Oyster Perpetual Deepsea Challenge.

The new Deepsea Challenge was inspired by the experimental watch that famously accompanied filmmaker and explorer James Cameron on his historic descent into the Mariana Trench, which with a depth of about seven miles is the deepest point in the ocean, in 2012. After a decade of research and development, Rolex has created a series of production divers with unprecedented capabilities.

The first step toward designing this revolutionary watch was determining the right materials. Here, Rolex selected a grade 5 titanium alloy called RLX titanium. This particular alloy hits the sweet spot, being both lightweight and highly durable. Despite its oversized 50mm proportions, the new Deepsea Challenge is 30 percent lighter than Cameron’s experimental model from 2012.

In addition, the Deepsea Challenge incorporates Rolex’s many years of dive watch innovations. It features the combination of a standard helium escape valve and the brand’s patented Ringlock system, which further enhances the case’s ability to withstand the extreme pressure experienced at great depths. The Deepsea Challenge also incorporates the brand’s Triplock crown with three sealed zones and Chromalight display for optimal legibility.

Powering this impressive timepiece is the brand’s in-house caliber 3230 with Superlative Chronometer certification and a 70-hour power reserve. This self-winding movement houses three key components from Rolex: the patented Chronoenergy escapement, Parachrom hairspring and Paraflex shock absorbers. Flip the watch over and you’ll find a solid titanium caseback with commemorative dates. As an homage to Cameron’s important dive as well as that of oceanographer Jacques Piccard and U.S. Navy Lieutenant Don Walsh aboard the Trieste with a Rolex prototype in 1960, the caseback of the Deepsea Challenge is engraved with the words “Mariana Trench” as well as the dates “23-01-1960” and “26-03-2012.”

The Oyster Perpetual Deepsea Challenge is priced at $26,000—a small price to pay for how well built this wearable machine must be.