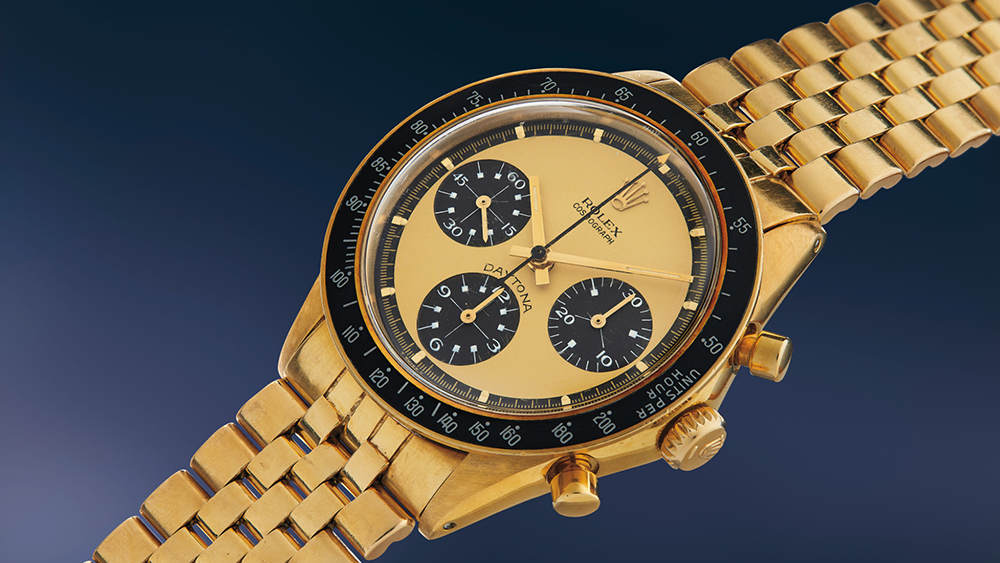 Here’s one watch that’s worth a squeeze. And by “squeeze” we mean a cool million or two.

This Rolex is not just a Daytona, it’s a Paul Newman Daytona. It’s not just any PND, either; it’s an exceptionally rare Ref. 6264 with an exclusive “lemon grené” dial. And it will lead the upcoming Phillips watch auction in New York.

The sweet timepiece was crafted in Mexico under the specification of Rolex back in 1969 and has remained in the same family collection for more than half a century. Aptly nicknamed “El Limoncito,” it features an 18-karat yellow-gold case and what the auction house says is “the rarest exotic dial for the model.”

As a Paul Newman-style Daytona, it is a three-register chronograph and sports a striking lemon dial with black contrasting subdials, a black outer seconds track and a black bezel. Elsewhere, the bracelet’s clasp is stamped “Hecho in Mexico,” in honor of the watch’s origins.

According to Phillips, the watch was the crown jewel of a small collection and was hardly ever worn by the owner. As a result, the vintage rarity is presented in top condition despite being more than 50 years old.

Of course, acquiring this grail will not be quite so easy. Rolex’s famed Paul Newman Daytonas are considered kings of the auction block and routinely attract astronomical prices. Seldom seen publicly, this particular variant is expected to fetch between $600,000 and $1.2 million at Phillips this spring. It could, of course, go for more. A Daytona ref. 6263 with a similar lemon dial hammered for more than $3.7 million back in May 2017, for example.

The auction, which will take place over the course of two sessions on June 11 and 12, respectively, will feature several other rare and historically significant timepieces from all the usual suspects. Highlights include one of Patek Philippe’s legendary Ref. 5016 minute repeaters, a very early Tourbillon Souverain by F.P.Journe and a platinum version of Roger Smith’s open-worked Series 2.

Check out more photos of El Limoncito below: