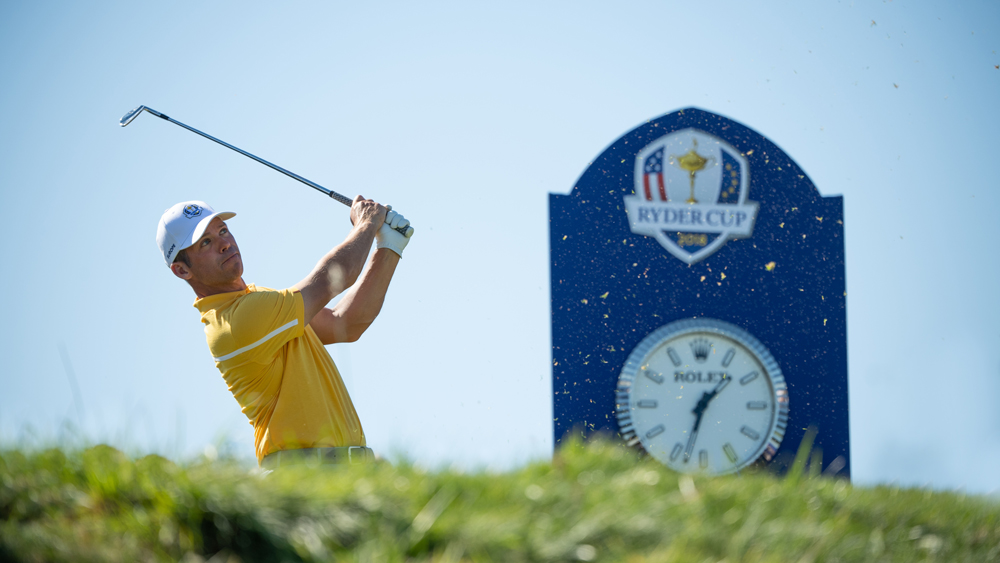 The Ryder Cup is underway, and the pervasive crowned, plated, all-caps Rolex logo keeps watch (and time) over the entire pageant. As an official sponsor of the tournament, Rolex counts many of today’s competitors amongst its exclusive club ofTestimonees (Rolex’s term for a brand ambassador)—includingprominent celebrities and professionals from different disciplines around the world who wear the Swiss of timepieces while testifying to their greatness.

For only the second time in the Cup’s history, the oft-heated, biannual golf tournament between the U.S. and Europe is being held at Le Golf National in suburban Paris. It’s Team Europe’s show this year, before the Ryder Cup event returns to America at the legendary Whistling Straits in Wisconsin, come 2020. Consequently, Rolex has its prominent Euro rookies front and center in Paris. Swinging from the Ryder Cup tee box for the first time are new Rolex Testimonees Jon Rahm and Dane Thorbjørn Olesen. They follow veteran and Rolex enthusiast Paul Casey into battle; the Brit battled for two winning Team Europe squads in 2004 and 2006. And the Europeans might be the favorites again despite Team USA loading up with Major winners to defend its cup win in 2016. Alas, the Americans haven’t won on European soil in a quarter century.

Though Rolex is married to the European presence at this year’s cup, Team USA (sponsored by Omega) brings along more Rolex Testimonees than their European counterparts. Phil Mickelson, a Ryder Cup fixture since 1995 and shoo-in for future U.S. team captain, joins two-time and defending U.S. Open Champion and 2018 PGA Championship winner Brooks Koepka and three-time Major winner Jordan Spieth—all of whom are Rolex Testimonees. Fan-favorite and Rolex fixture Rickie Fowler sheds his trademark orange outfit for a Team USA sweater alongside Ryder Cup rookies Bryson DeChambeau and former World No. 1 and fellow Rolex Testimonee Justin Thomas. Finally another Rolex Testimonee, off his recent tour success, some up-and-comer named Tiger Woods, tags along for the fun.

As the tournament rolls through day one and a 3-1 Team USA lead following Four-Ball Matches, Rolex is focusing on introducing the world to other Rolex Testimonees who might not pack the international recognition of names like Woods and Mickelson. There are meet-and-greets prepared with Carin Koch, LPGA pro and Rolex Testimonee since 2010. She scored three professional wins on the LPGA Tour and Ladies European Tour so far, with a Women’s World Cup of Golf title and seven top-10 finishes in LPGA Majors. She also played on two winning teams in the Solheim Cup (the women’s equivalent of the Ryder).

On the golf instruction side, 2013 Rolex Testimonee Claude Harmon III is a world-renowned golf coach whose grandfather won The Masters in 1948 and father Claude “Butch” Harmon coached Tiger during many of his 14 Major wins. These days, Harmon III works out of Scotland, Portugal, Dubai and the United States Koepka, as well as world number one Dustin Johnson, Adam Scott, and Trevor Immelman.

As the players do battle along the beautiful yet brutal water-lined links of Le Golf National, watch lovers by the thousands gallery visit the several Rolex experience attractions built along the course. The watchmaker’s 2018-2019 stars are all on hand, including the GMT-Master II in Oystersteel, the Datejust 31, the Deepsea, the Datejust 36 and Cosmograph Daytona.

The Ryder Cup continues Saturday and Sunday will have one-on-one matches on tap for the closing rounds.